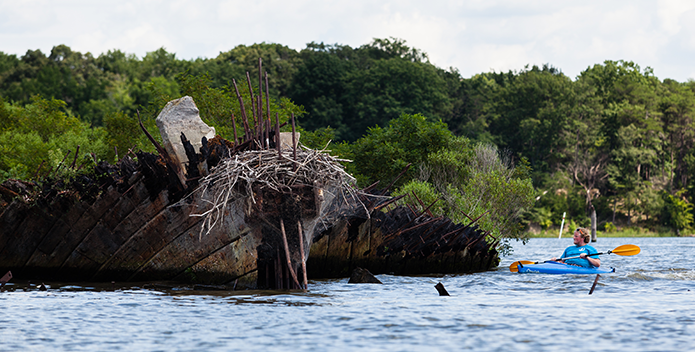 Matthew O'Connor of Annapolis is dwarfed by a shipwreck at Mallows Bay Park in Charles County, Md., on the Potomac River on Aug. 8, 2015.

After years of hard work, this paddling destination will have federal protection.

The Potomac River, just 40 miles south of Washington, D.C., is now home to the newest National Marine Sanctuary. The National Oceanic and Atmospheric Administration (NOAA), the state of Maryland, and Charles County announced the Mallows Bay-Potomac River National Marine Sanctuary earlier this month after years of working for this designation. Mallows Bay, a small bay within the Potomac River, contains more than 100 abandoned steamships and vessels that were built as part of the nation’s engagement in World War I.

Wait, WWI ships in the Potomac?

In 1916, President Woodrow Wilson created the U.S. Emergency Fleet Corporation, which began building hundreds of ships to combat the destructive German U-boats sinking merchant and passenger ships in the Atlantic. Forty shipyards across 17 states, including Maryland, Virginia, and Pennsylvania, were charged with building more than 100 wooden steamboats. Ultimately plagued by mechanical and construction issues, none of the ships saw any action during the war.

Following the Allied victory, most of these wooden steamboats were moved to an 18-mile stretch of the Potomac to be salvaged by a local company for scrap metal. The ships were later abandoned in Mallows Bay—what would eventually be called the “Ghost Fleet” of Mallows Bay.

Some other ships that can be found at Mallows Bay date back to the Civil War. The new sanctuary site also includes Native American archaeological sites dating back 12,000 years.

From wartime to sanctuary

Since their abandonment, the ships have merged with the environment. Mallows Bay is now a recreational destination. Paddlers can navigate around and over the ships as osprey look on from their historical perches and fish swim below. Mallows Bay-Potomac River National Marine Sanctuary will be the first national marine sanctuary created since 2000, and with its unique blend of historical, recreational, and habitat resources, it’s a great designation of which the Bay region can be proud.

The sanctuary designation will become official after 45 days of Congressional session once the action is published in the Federal Register. CBF provided extensive comments during the nomination process including advocating with local groups for the largest possible boundaries for the santuary. We will continue, now that designation is complete, to advocate for water quality protection for tributaries to the Potomac affecting Mallows Bay through Maryland Department of the Environment’s Triennial Review of water quality standards.