Could It Happen Here? 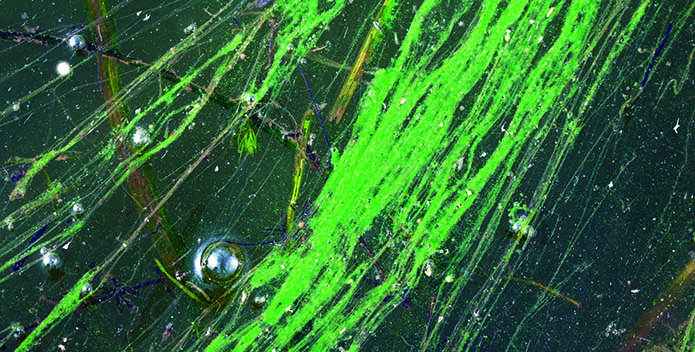 Another tragedy caused by toxic blue-green algae has many wondering

Last week, three dogs—Abby, Izzy and Harpo—had a play date in and around a seemingly harmless pond in Wilmington, North Carolina. A few hours later all three were dead. The culprit? A poisonous blue-green algae, which several years ago had wreaked havoc on Lake Erie and shut down the municipal drinking water supply in Toledo, Ohio.

You may be wondering: Could it happen here? Unfortunately, the answer is . . . yes. And in some cases, it already has. The Virginia Department of Health has found samples of the algae this summer near Lake Anna. In Maryland, that same algae was found in Lake Needwood and nearby Lake Frank north of Rockville, Maryland. And there have been recent sightings in Pennsylvania as well according to Lancaster Online.

After sitting down with Dr. Beth McGee, Director of Science and Agricultural Policy at CBF, here's what you need to know about this blue-green algae:

The take-away is this: We must reduce the risk to our and our pets' health from blue-green algae and other harmful algal blooms in the Chesapeake Bay region. This can be done by accelerating efforts to reduce nutrient pollution. Agriculture and urban runoff are primary sources of much of the phosphorus and nitrogen pollution causing these blooms. So, it makes sense to focus efforts on reducing these two sources of nutrient pollution.

Here in the Chesapeake region, those efforts are clearly laid out in the Chesapeake Clean Water Blueprint, the federal-state plan to restore the Bay and its rivers and streams. The good news is that it's working. Partners across the region—including hard-working farmers, business, and individuals—are working together to reduce pollution. But the recovery is fragile, and much work needs to be done.

Yes, what happened in North Carolina, Toledo, and other places across the country could happen here. Let's ensure it does not. If we, who live in the Chesapeake region want the safe, clean waters we deserve, the Blueprint must be fully implemented. Now, in the final and most important phase of the clean-up effort, the Bay partnership must finish the job.

Five Things You Can Do to Help: