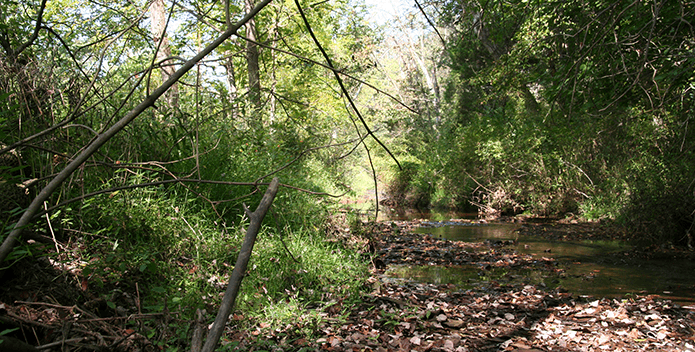 Since 2002, landowners Ed and Mary Franco have been nurturing a forested buffer along the 1,500-foot section of the creek that winds through their property near Carlisle and connects Opossum Lake and the Conodoguinet Creek.

“We felt strongly about trying to maintain the corridor that runs through the property in terms of wildlife and improving water quality,” Ed Franco says. “I could say there is very little runoff following maturity of the buffer.”

With 17 years of buffer experience, Ed Franco sees similar potential for success in the collaborative power of planting buffers through the Keystone 10 Million Trees Partnership, coordinated by CBF. “I believe it is a great way to educate the general public and jump start large-scale riparian projects across the state,” Franco says. “Building a sense of stewardship and commitments from landowners and other groups to maintain the buffers through the initial years will be crucial to its ultimate success.”

The Partnership is a collaborative effort of national, regional, state, and local agencies, conservation organizations, watershed groups, conservancies, outdoors enthusiasts, businesses, and individuals. Its goal is to plant 10 million new trees by the end of 2025. 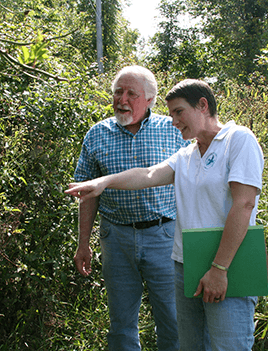 Landowner Ed Franco and CBF Restoration Specialist Kristen Hoke inspect some of the trees that have grown along Franco's forested buffer.

“What the Francos have done planting trees to create a buffer that protects and enhances water quality validates efforts of the Keystone 10 Million Trees Partnership,” CBF Restoration Specialist Kristen Hoke adds. “Their actions set the example because they did it 15 years ago. They are proud of what they have done and continue to be good stewards of their buffer and maintain it.”

The Francos signed up for the CREP (Conservation Reserve Enhancement Program) and teamed with the Chesapeake Bay Foundation (CBF), Ducks Unlimited, and another wildlife group to make the buffer and other pollution practices possible.

Kristen Hoke notes that the Francos did more than put in the buffer. “In addition to planting a riparian forest buffer, with fencing they excluded their horses from having unlimited access to the stream and installed two watering areas which still allowed for fresh water but limited the area the horses could disturb,” Hoke says. The Francos bought the property in 1981 and raised beef cattle before they acquired horses.

Today, the Francos’ mature forested buffer requires much less maintenance than it did in the early years. The tree species include white oak, red oak, pin oak, red maple, sycamore, ash, locust and some walnuts, and some white spruce. In fact, some of the native walnut, ash, and locust trees are generating their own young trees.

Franco suggests prospective landowners check to see if they may be eligible for programs that offer assistance. “There are a lot of resources in terms of information,” he said. “I would check with your local department of agriculture. Also the Chesapeake Bay Foundation is offering trees and technical assistance through its Partnership.”

Franco adds that planting trees is a long-term commitment. “It takes nurturance and stewardship and concern,” he says. “It is a commitment. It is ultimately on the landowner to provide the maintenance. While sometimes you can find volunteers to come out and plant trees, they are not really interested in coming back and beating back multi-flora rose and honeysuckle and poison ivy when the brush takes over.” 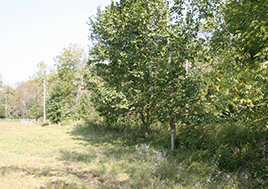 Maintenance in the early-going was a key contributor to eventual success of the Francos’ buffer that at some points is 75- to 100-feet wide.

“We had to stay after it intensively for at least the first five years,” Ed Franco says. “We had a lot of die-back. A lot of trees were dying; some from voles and there was a bit of drought.”

But they persevered. “We replanted I would say at least 30 percent,” Franco says. “Those first five years, we would water the trees, which was difficult, but it seemed to help.” The Francos were able to sign onto CREP for another 15 years because they achieved the required 70 percent survival rate.

Less required maintenance of an established buffer, especially one that is generating its own young trees, is the payoff for earlier diligence. “Under the CREP program, they don’t want you to do any more mowing to control weeds and invasives,” Franco says, “because they want the regeneration of the volunteer trees.”

The most Franco has to do now is spot-spray multi-flora rose, honeysuckle, and poison ivy. In addition to the trees’ ability to reduce polluted runoff from his property, Franco notes improved wildlife habitat that welcomes turkeys, herons, ducks, deer, fishers, and more., “Certainly we enjoy having that natural area with the wildlife. It is very lovely, and we’re doing our part in terms of runoff.”

If you are a Pennsylvania landowner interested in getting information about planting trees on your property through the Keystone 10 Million Trees Partnership, visit and contact us through www.TenMillionTrees.org.