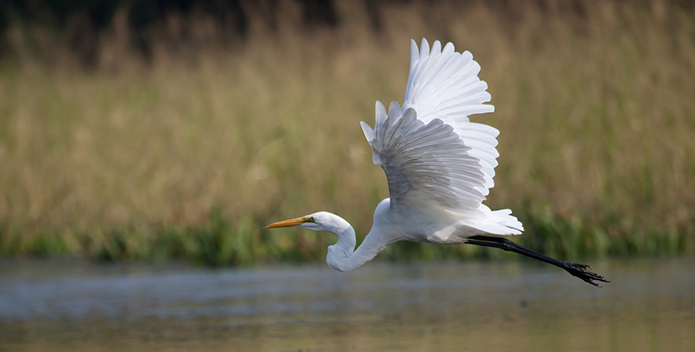 The following was first published in the Daily Press.

Virginia recently released a strong, detailed, and practical plan to reduce pollution to its portion of the Chesapeake Bay and the tidal rivers that feed it.

Now, Gov. Ralph Northam and the General Assembly must turn the plan into action.

It's the final push to meet cleanup goals outlined in the historic Chesapeake Clean Water Blueprint. Grounded in science and a federal-state partnership, the blueprint requires all six states that share the Bay watershed, and the District of Columbia, to reduce pollution. It sets a 2025 deadline for implementing measures that will provide clean, safe water and vibrant wildlife in our rivers, streams, and the Bay.

Success has never been closer. Underwater grass beds, which provide critical habitat for blue crabs, covered more than 100,000 acres of the bay in 2017—the largest extent in 40 years. Blue crab populations are up 60 percent this year. Last fall, the Lafayette River became the first river in Virginia to meet goals for oyster reef restoration; and biologists have since found at least 25 species of fish living around the reefs.

Truly, these are exciting times for clean water in Virginia and the Chesapeake Bay. The commonwealth is on track to meet its blueprint goals, thanks to investments in wastewater treatment technology, steps to limit pollution from development, and on-farm conservation practices.

But progress is fragile, and we have new challenges. Climate change, for one, brings real and immediate threats to the bay and communities like Hampton Roads. More frequent and intense rainstorms and one of the fastest rates of sea level rise in the nation will make bay cleanup harder.

It's going to take a lot more work, from all sectors, to get the job done. Virginia has to accelerate efforts to reduce pollution from agricultural sources and growing urban and suburban areas. And it must continue modernizing sewage treatment plants.

We know what works. The Chesapeake Bay is one of the most extensively researched bodies of water on the planet. We know that installing rain gardens and other green infrastructure reduces polluted stormwater from city streets. We know that planting trees along stream banks traps pollution washing off farm fields. We know fencing livestock out of streams reduces erosion and the release of sediments.

The biggest hurdle to finishing the job is mustering the political will and resources to put these solutions on the ground.

The plan Virginia released last month is a great blueprint for success, and it has earned broad support—97 percent of the 4,850 public comments submitted on the draft favored it. But the plan is only as good as its implementation. It is imperative Gov. Northam's next budget, due out later this year, and the investments Virginia's legislators make in the General Assembly, fully fund the programs outlined in the plan.

At the same time, Virginia cannot ignore what happens upstream in the watershed. The Chesapeake Bay is North America's largest estuary—a single, interconnected system spanning 64,000 square miles. Everything that happens upstream washes down to Hampton Roads at the mouth of the bay. And that affects the economy, tourism, fisheries, and quality of life here.

The partnership working to restore the Bay is only as strong as its weakest link. Unfortunately, upstream, Pennsylvania is far behind where it needs to be. And that threatens to undermine the entire cleanup effort, including Virginia's progress.

The partnership's governing body, the Chesapeake Executive Council, meets September 5 in Maryland to chart the course of cleanup efforts over the next year. Gov. Northam, working with the leaders of the other Bay jurisdictions, should call on the Environmental Protection Agency ensure Pennsylvania develops a plan that finances and achieves its pollution reduction goals by 2025.

If we follow the blueprint, if we implement it, the Chesapeake Bay will improve. The water quality in our streams, rivers, and lakes will improve. Our communities, our economy, and our well-being will improve. A restored bay can happen in our lifetime. The choice—and the responsibility—is ours.

We presented EC leaders with a Resolution to fully commit to saving the Bay by supporting Pennsylvania in its efforts. Take action—before the Executive Council meeting September 5—and urge Executive Council Chairman Maryland Gov. Larry Hogan and EPA Administrator Andrew Wheeler to thoughtfully discuss and adopt this Resolution with Chesapeake restoration partners.