How Will the Story of Chesapeake Bay Restoration End? Virginia’s New Plan Is a Crucial Chapter. 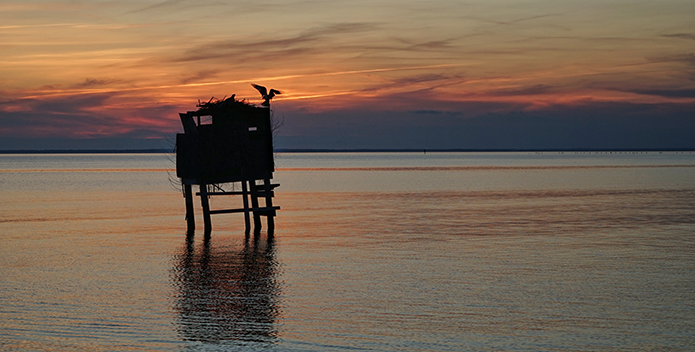 An osprey lands on a nest next to it's mate in the failing light of evening along the Virginia coastline of the Chesapeake Bay in Mathews County.

The following was first published in the Virginia Mercury.

It is hard to overstate the importance of the current moment for Chesapeake Bay restoration. Our region is on the verge of a tremendous environmental success story that will be studied around the world.

Or it could be the scene of another effort that misses the mark. Virginia’s recently finalized roadmap to cleaning up the Chesapeake Bay promises to be critical.

Restoring the Chesapeake means healthier streams, creeks and rivers from the Alleghany Highlands to the Eastern Shore. It means protecting our drinking water sources, our beaches and our swimming holes. It will boost Virginia’s seafood, recreational fishing and tourism industries and revitalize riverfronts in cities like Richmond, Alexandria and Norfolk. It will restore iconic rivers like the James, York, Rappahannock, Potomac and even the Susquehanna, as well as the bay itself.

In short, we’ve got a lot to gain.

Early restoration efforts by bay states made some progress but ultimately fell short. Things promised to change in 2010 with the establishment of the Chesapeake Clean Water Blueprint, the work of a federal-state partnership in which each bay state made concrete commitments to reduce pollution by 2025.

Now, halfway to that deadline, we’re starting to see results. The Chesapeake Bay is staging a comeback. Virginia’s oyster aquaculture industry is thriving thanks to cleaner water. Underwater grass beds, once threatening to disappear, are reappearing across vast watery acres. The bay is even showing resilience despite record levels of polluted runoff from last year’s heavy rains.

But our waterways are still a far cry from what they could be. That is why Virginia’s plan, technically called the Phase III Watershed Implementation Plan, is so important. It commits the commonwealth to taking concrete actions to meet Virginia’s pollution reduction goals by 2025.

Public feedback on the plan has been overwhelmingly supportive. In fact, 97 percent of the 4,850 comments Virginia received were positive.

While this plan is an important next step, hard work lies ahead: Virginia must now ensure it is fully implemented. Success will depend on continued support from Gov. Ralph Northam and the General Assembly.

Let’s take a closer look at what is needed to get the job done.

Much of the progress so far in Virginia to reduce pollution has come from the modernization of sewage treatment plants, which have significantly reduced the amount of pollution they discharge into rivers.

Some of Virginia’s wastewater plants have already undergone upgrades thanks to reliable investments by the General Assembly. But not all plants have been brought up to modern standards.

Consider the James River, where Richmond’s wastewater treatment plant recently installed new technology to substantially reduce pollution. But that’s one plant among many. To ensure a healthier James River, the counties surrounding Richmond must also commit to modernizing their plants.

Virginia’s blueprint speeds up the process of bringing wastewater treatment across the bay watershed to fair but high standards.

Another major focus of the blueprint is helping farmers adopt conservation practices that reduce pollution from farm operations. Without such practices, heavy rains can wash excess fertilizer from croplands into streams. And on some livestock farms, cows are allowed to wade into streams at will, where they drop their waste directly into the water.

For years, farmers have been working hard to prevent this pollution. Now Virginia’s blueprint spells out what’s still needed, including broader use of science-based fertilizer practices on croplands as well as flexible incentives and a clear deadline for keeping all livestock out of streams. These practices not only reduce pollution, they have many other benefits for agricultural operations.

While farmers want to do their part, they can’t be expected to shoulder all the costs of implementing these practices. Increased investment is needed in Virginia’s agricultural cost-share program, which supports these projects.

Controlling the polluted runoff from roads, parking lots, roofs and other hard, developed surfaces is another major challenge. Fortunately, there are many ways to slow and filter this runoff before it pollutes waterways. For example, rain gardens and restored wetlands capture and absorb stormwater. Urban trees are natural umbrellas that prevent rains from flooding streets. Permeable pavement can soak up runoff.

Virginia’s cities and counties have been installing these practices with the help of Virginia’s Stormwater Local Assistance Fund, which provides matching state grants for local projects that reduce runoff. Virginia’s blueprint supports increased investment in this fund and a host of other policies that will better control stormwater.

Added to these issues are new challenges to our clean water goals created by extreme weather events from climate change.

Clearly, reducing pollution from agriculture, stormwater and wastewater will require substantial investment on the state level. CBF estimates the needs add up to about $235 million annually for the next five years.

The good news is we now have a detailed roadmap with proven steps for meeting the commonwealth’s commitments. We are hopeful Governor Northam will fully support the blueprint in his biennial budget, due out in December. Then it will be up to state legislators to ensure the funding and programs are in place to make this plan a reality. The upcoming General Assembly session is our best chance to make sure we can achieve Virginia’s clean water commitments by 2025.

Let’s make history. Virginians should continue to lead in in restoring our precious waterways and the Chesapeake Bay, a national treasure. It’s up to all of us to ensure our legacy for future generations is clean water.