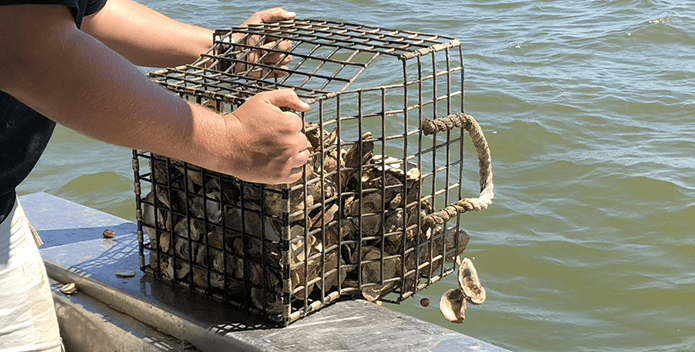 Recycled oyster shells are seeded with baby oysters (called spat), when they're old enough, they're able to go planted back into the Bay and its rivers.

If you find yourself slurping down oysters at National Harbor, or another MGM property in Las Vegas, you have more than one reason to feel good. Those shells on your plate will one day end up with baby oysters growing on them in the Chesapeake Bay. 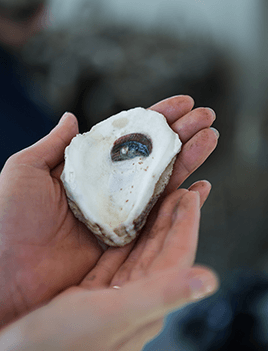 Not only do they taste good, an adult oyster can filter up to 50 gallons of water each day—that's why restoring oyster reefs is so important for the health of the Bay!

When MGM Resorts International opened National Harbor on the banks of the Potomac River, the global entertainment company wanted to find a way to connect with the local community. It recognized the deep ties Maryland and Washington, D.C. have to the Chesapeake Bay and wondered: how can we help save the Bay?

It’s hard to go wrong with oysters. An adult oyster can filter up to 50 gallons of water each day. That’s a lot of water-cleaning power! Unfortunately, decades of overharvesting, disease, and habitat loss have left the Bay’s oyster populations at just a fraction of their historic levels. And one of the biggest challenges to restoration is a lack of oyster shells to build reefs, which form the surfaces baby oysters need to grow.

By recycling oyster shells consumed at the National Harbor property, MGM is helping to save the Bay by enabling more oysters to grow in the water. MGM has also sponsored CBF’s DC on the Half Shell event for the past two years. This support furthers our oyster restoration efforts in both Maryland and Virginia.

Even more exciting, the National Harbor pilot project was so successful, MGM expanded it to their properties in Las Vegas, as well. Thousands of pounds of oyster shell are now kept out of landfills and recycled as homes for new oysters in the Chesapeake Bay. 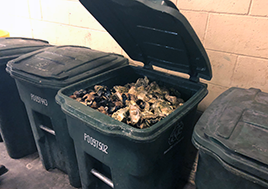 Oyster and clam shells fill a shell recycling bin at MGM. These shells will be used to help plant baby oysters in the Chesapeake Bay.

On a recent trip to Las Vegas, I had the opportunity to see firsthand some of the amazing sustainability practices MGM International is performing throughout their properties (and you can check them out in this video!).

My tour guide was Brittany Price, MGM’s Director of Sustainable Operations. She was kind enough to give me a behind-the-scenes look at MGM’s CityCenter complex. At the time, the 16,797,000-square-foot complex was the largest new construction project in the world to achieve LEED Gold certification from the U.S. Green Building Council. CityCenter is also one of five MGM properties to receive a “5 Green Keys” designation from Green Key Global for their sustainability operation.

In addition to recycling oyster shells, MGM is reducing food waste from the site by donating prepared, unserved event food to provide meals to those in need in Las Vegas. Extra food waste is used to feed pigs.

CBF values MGM’s commitment to sustainability, and we look forward to continuing to work together to restore the Chesapeake Bay!