Pennsylvania Farmers Experience the Bay Their Efforts Can Save 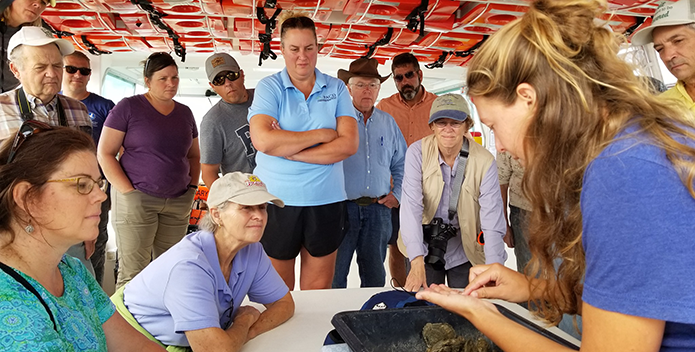 Pennsylvania farmers got a close up look at something they don't see everyday in PA, Chesapeake Bay oysters.

Poultry farmers Leslie and Melanie Bowman paddled amid the marshes in the late afternoon near Port Isobel, in Virginia’s portion of the Chesapeake Bay. 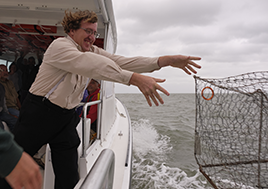 Amish farmer Elam Stoltzfus sends a crab pot overboard during the trip to the Bay.

Amish dairy farmer Elam Stoltzfus pushed a baited crab pot over the side of the boat and into the Bay east of Tangier Island.

Farmer and shutterbug Donna Hughes photographed dock after dock of watermen’s shanties and crab pots during a boat ride at Tangier.

They were among about a dozen Pennsylvania farmers on an expedition to the Chesapeake Bay recently. It was a chance to see and feel the effects of their clean water efforts and to exchange shared experiences of the challenges and rewards of farming surf and soil, with local watermen.

“Bringing farmers here gives the farmers an excellent opportunity to see the Bay and appreciate its beauty and the ecological system that is in place,” said Bill Chain, a key organizer of the trip. He is CBF’s Senior Agriculture Program Manager in Pennsylvania. “Farmers may also better understand how what happens upstream affects the Bay.”

Leroy Bupp said the trip will leave him “a lot closer connected. I preach ‘Clean up the Bay, clean up the Bay.’ Of course I can see why,” he added. “It’s really nice to see the other side.” With wife Joyce, Leroy grows corn, beans, and wheat and has steers on a farm in York County that has family roots that date back more than 240 years.

The farmers immersed themselves in what goes on at the Bay, under the watchful and tutoring eyes of CBF staffers Mike Diehl, Morgan Jones, and Jeff Varnon. 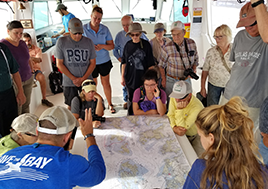 Pennsylvania farmers took a closer look at the Bay and testing their map reading skills.

Farmers went paddling and fishing at Port Isobel, their home-base for the weekend. They assembled, baited and launched crab pots into the Bay and then retrieved about three dozen crabs the next day.

They saw dredging for oysters and scraping that brought up grasses, shrimp, crabs, and puffer fish.

They did water tests for salinity, phosphorus, nitrates, and clarity.

On visits to Tangier they ate seafood and visited the Island museum on a quiet Sunday morning when most of the town was at worship.

A watershed moment was a two-hour meeting between farmers watermen James “Ooker” Eskridge, who also is the mayor of Tangier, and Lonnie Moore, who was CBF’s Fleet Senior Manager before getting back into crabbing.

“Farmers are so often continuing to farm because it’s so important to maintain the heritage of their family,” Glen Cauffman said. He raises Angora goats in Perry County. “Many of us think about our grandfathers and great-grandfathers who worked very hard to organize these farms that we inherited and were passed down to us. It’s a great deal of worry when we can’t keep them sustainable and keep them going.”

“My oldest son is doing it,” Ooker, the waterman, said. “I didn’t force him into it. I encouraged him and he had the option to pursue it or not. He loves it and is very good at it. Glad he did because it passes it down. My father was involved in it, grandfather, great-grandfather. We’re proud of what we do.” 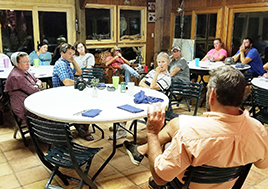 Farmers and watermen talk about the common challenges of their jobs.

“People, before they start making rules, they need to come out in the field,” Gordon England said. He is part-owner of a large, family-owned dairy in Blair County. “They are coming out of the city and college and they are making decisions based on what they were taught in school.”

“You’ve got regulators and legislators making these laws regarding the water business don’t know understand the business,” Ooker said. “I took a peeler pot (used to catch crabs ready to shed their shells) with us to Richmond. We went before the General Assembly. They are the ones going to decide how to use this. They’d never seen one before. But they’re telling us how to use it. It would be like putting me on a farm board. Seems ludicrous.”

“There’s a great challenge for farmers in Pennsylvania and it goes back to regulations,” discussion moderator Bill Chain added. “It goes back to the Chesapeake Bay Blueprint and the agreement in which all the Bay states signed and said they would develop watershed implementation plans.”

Chain is CBF’s Senior Agriculture Program Manager in the Commonwealth. “The state is taking heat because its plan came up short at 76 percent nitrogen reduction instead of 100 percent. And Pennsylvania says that there will be a $320 million shortfall in funding annually. That shortfall in funding is the kinds of funds that might be available for farmers to implement all kinds of conservation practices.”

“I had the chance to testify on a panel to the Bay Commission,” Juniata County farmer David Graybill said. “Those guys are going to make the decision. Ooker going to Richmond to talk to them is a real plus,” Graybill added. “We need more watermen or whoever doing that. Because those making decisions know. We talk a different language than they do.”

Many of the farmers on the trip are members of the Pennsylvania No-Till Alliance, so discussion turned to soil and water quality.

“If a farmer takes soil health principles and applies them to the farm, without knowing anything about the Chesapeake Bay, the Chesapeake Bay will be cleaner,” Steve Groff said. He and wife Cheri have steers, a small bison herd, and farm various crops, including hemp, on 175 acres in York County. “If it works for the farmer, he keeps his fertilizer in the field. That’s going to make him a better farmer financially, because he pays for that stuff.“

“If he’s helping me, I don’t care if he knows about me or not,” Ooker added. 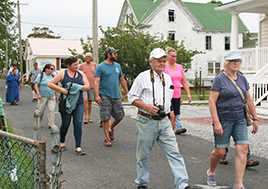 Pennsylvania farmers walk around Taniger Island, Virginia, a small community of mostly watermen families that have much in common with the farmers.

When market prices came up in the discussion, Steve Groff said, “Prices for what you harvest are out of your control. We always hope that it rains in the Midwest. It drives the prices up.”

“They set the price,” Lonnie Moore said of watermen transactions. “The buyer comes in and says ‘we’re going to give you this much, this week. That’s what you get. Either take it or leave it.”

Farmers and watermen also shared concerns about weather, health care, and dangers of the jobs.

“I think that both the watermen and the farmers want to do better. Better for their farms, the Bay, their families, and their communities,” Donna Hughes said. She farms 52 acres, of pastureland in Centre County. “You can feel (and hear) the frustration in their stories and discussions.”

Elam Stoltzfus farms 30 cows and 40 sheep, corn and hay on 70 acres in Clinton County. He said he went on the trip with an open mind, “to see what we can do up here to make things better down there. It’s a nice getaway, but it’s to see what’s actually going on down here.”

“Getting the ‘hands-on’ feel for oyster dredging and setting crab pots, as well as actually being on Tangier Island and in the mid-Bay setting gives a whole new feel and outlook about the Bay,” Joyce said, “and a greater understanding about how fragile and complex the water and the Bay life is.”

The exchange between those who farm on surf and turf may continue if a proposed watermen-to-the-farm trip comes together in the future.