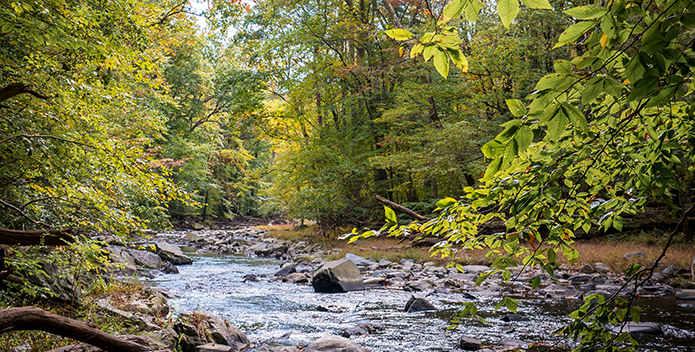 Forests play a critical role in filtering the water that ends up in our waterways, such as in this stream in Harford County, Maryland.

This op-ed was originally posted in the Capital Gazette.

The Anne Arundel County Council should find ways to restore parts of the forest conservation bill they recently weakened with amendments.

At the heart of Pittman’s proposal was a policy to raise the bar for how much forest should be left alone on a site. In many cases, the low current thresholds enable a developer to clear-cut trees from more than half of a project site without having to replant the trees elsewhere.

Where Pittman proposed tripling these thresholds, the Council majority voted instead for amendments that increase most thresholds by less than half. The council amendments also dilute protections for ecologically valuable forest habitats, open the door for a rush of partially-conceived development projects to squeeze in under the old law, and muddy the criteria for granting modifications to important forest protections that remain in the bill.

Several other amendments run afoul of state law. One excuses projects located on “partially” developed land outside of growth areas. Another writes off replanting requirements for removing iconic trees that developers claim are not in “fair or better condition.”

The weakened legislation triages but does not cure forest loss in Anne Arundel County, especially on large sites where developers can currently cut dozens to hundreds of acres of forested land with little replanting required.

Despite this, we don’t believe the bill should be scrapped. It should be fixed. Even with the weakening amendments, the bill adds greater protections for forests in Anne Arundel County than currently exist. And given that the county has led the state in forest loss since 2010, incremental change is better than none. The Council still has time to square up the bill with state law, close the loopholes, and raise the bar to protect the County’s most valuable forests.

We hope the Council will act on the importance of maintaining existing forested land in the county. Our trees insulate us against climate change. They filter water, clean our air, prevent flooding, and provide wildlife habitat. And they’re popular with county residents. There are ways to develop around forested land. Builders can construct projects with smaller footprints. They can incorporate forests into their designs. Or even better, they can redevelop underused parking lots, abandoned buildings, and aging properties to accommodate new businesses and new residents.

Back in 1991, when the state’s General Assembly was considering the Forest Conservation Act that became law later that year, developers argued it would stifle the economy and lead them to build elsewhere. After nearly 30 years under that law, we know that isn’t true. However, those same arguments are being repeated in the debate over this bill.

We believe the council has been working hard to get this right. Their work isn’t done.

As our population grows and unabated growth continues, we are reaching a tipping point where we must put in stronger protections. We urge the County Council to pass a stronger forest conservation bill to ensure current residents and future generations can enjoy the benefits trees provide.

Take action to urge the council—before they meet on Monday—to protect our forests and support a strong version of Council Bill 68-19.