Trees and Grasses Make a Haven for Wildlife and Clean Water 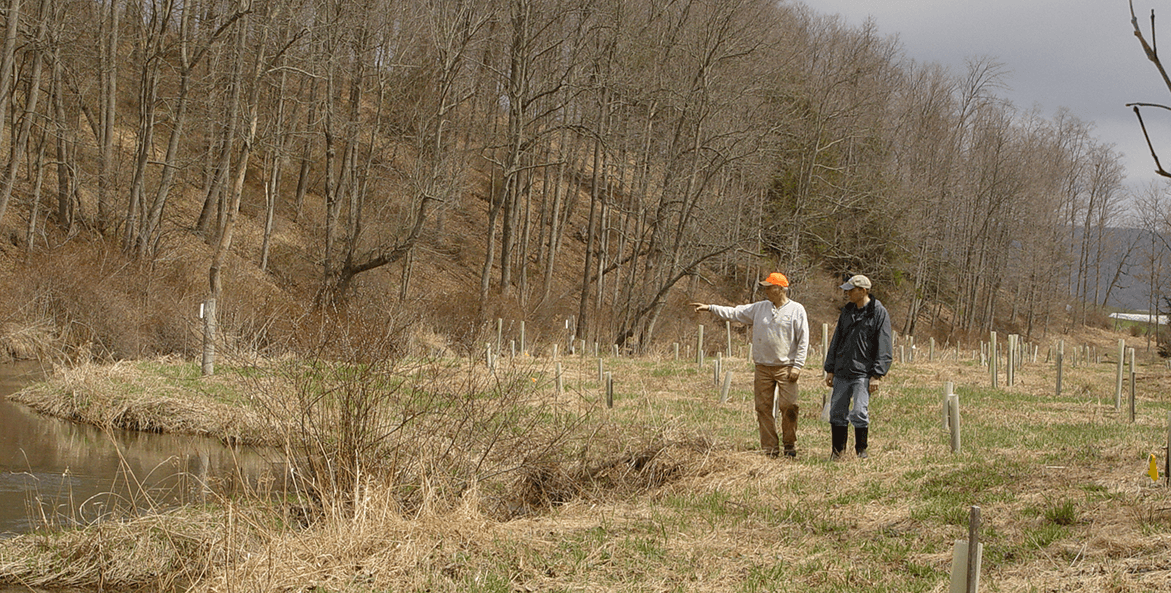 Planting trees to protect Elk Creek in Centre County has given landowner Chip Brown more bang for the buck by improving habitat for fur, feathered, and finned wildlife enjoyed by Pennsylvania hunters and anglers.

“Shortly after buying the property in 2005 and starting habitat improvements, I was watching two does most of the deer season, only to find out a neighbor shot them across the creek, on my side of creek,” Brown says.

That’s when Brown remembered a postcard about streamside buffers, he’d received from the Chesapeake Bay Foundation (CBF) and called restoration specialist Frank Rohrer. “I thought, what a great way to do something for the stream but also get it so thick down there you couldn’t see the deer on my side,” Brown says. 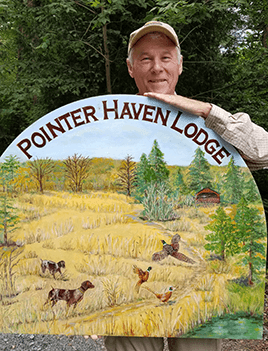 Brown and wife Diane own Pointer Haven Lodge on 109 acres in Rebersburg, PA, 30 miles east of State College. It is a haven for enjoying the sporting life. They hunt deer and gamebirds, fish, and shoot trap.

Establishing a buffer along Elk Creek, was a struggle at first, thanks to the local deer population.

“We had heavy deer browsing and weed pressure in there,” Rohrer remembers. “But Chip was very determined to make this a success and continued to work on noxious weeds and to replant trees.

Chip took it upon himself to build extensions on the four-foot tree tubes. It was just enough to keep it out of the reach of the deer.”

The buffer had to be revamped several times. “One thing we learned is that deer like certain species of trees,” Brown adds. “The original buffer was about 450 and we are approaching 800 to 900 trees and tubes along the stream.”

Elk Creek is a Class A wild trout stream, meaning it supports a population of naturally-produced trout. Such streams are considered the “best of the best” for trout fishing in Pennsylvania. But the creek is also impaired and in an area of farming practices and grazing that allows cattle in the stream.

Brown’s efforts have not gone unnoticed.

“I’ve worked with an Amish neighbor and English neighbor,” he says. “They are in the grant cycle for some additional non-profit and government work on the stream and some feeder streams that come into Elk Creek,” Brown adds. “As a result we are protecting around 700 acres of the upland areas that feed into Elk Creek.”

Partnerships have made good things happen for Elk Creek.

Through CBF, Brown enrolled three acres in Pennsylvania’s Conservation Reserve Enhancement Program, which pays some buffer installation costs and annual rent. The U.S. Fish & Wildlife Service removed 35 acres of invasive plants. A grant from the U.S. Department of Agriculture Natural Resources Conservation Service helped pay for stream work. Mudsills stabilize the bank, the stream width was narrowed to speed up the flow, and shade cools the water in the summer.

The Chesapeake Conservancy provided stream monitoring before and after restoration. 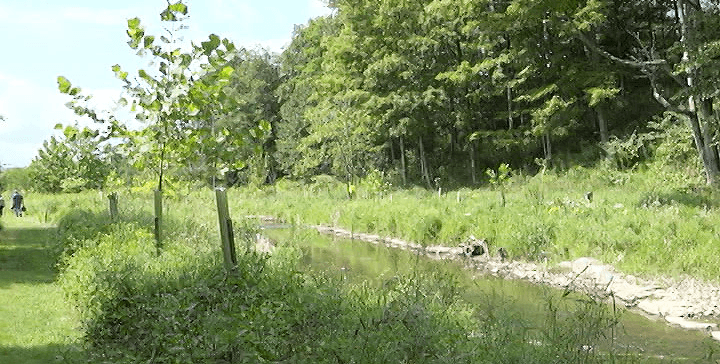 The streamside buffer along Elk Creek at Pointer Haven Lodge in Centre County continues to mature.

“We’re already seeing some pretty nice trout that any fisherman would be happy to get a tight line with,” Brown says. In the creek this past spring, students identified 47 different aquatic bugs that trout feed on.

Pointer Haven teams up annually with CBF, Trout Unlimited, and others to host 7th graders from Penn’s Valley High School for a five-station field day. Through CBF the students later visit the Chesapeake Bay to better understand the interconnection between Elk Creek and the Bay, and how their water quality affects the overall Bay water quality.

Brown bought the property to develop it with switch grass and other upland habitat so he could train bird dogs. It is an interest he has had since college. German shorthaired pointers Lucy, Coco, and Oreo are never far away as Brown walks the property.

“Where you have grass, you’ll have pheasants,” Brown says. “We have at least 15 acres of switchgrass, some upland thickets, and cattails as great winter cover for pheasants. Good woodcock habitat is near the stream.”

Food plots of sorghum, corn, and soybean were planted for the deer and for pheasants that they release.

“If you own bird dogs you are always looking for an opportunity to train your dogs and they have to point birds that are out there,” Brown says. Though there haven’t been any nests on the property, Brown says more birds are making it through the winter. “It’s nice to see a pheasant rooster in June that was released in January,” he adds.

“When you have a piece of land, you have to be a good steward of it,” Brown says, “and certainly I tried to do my part here.”