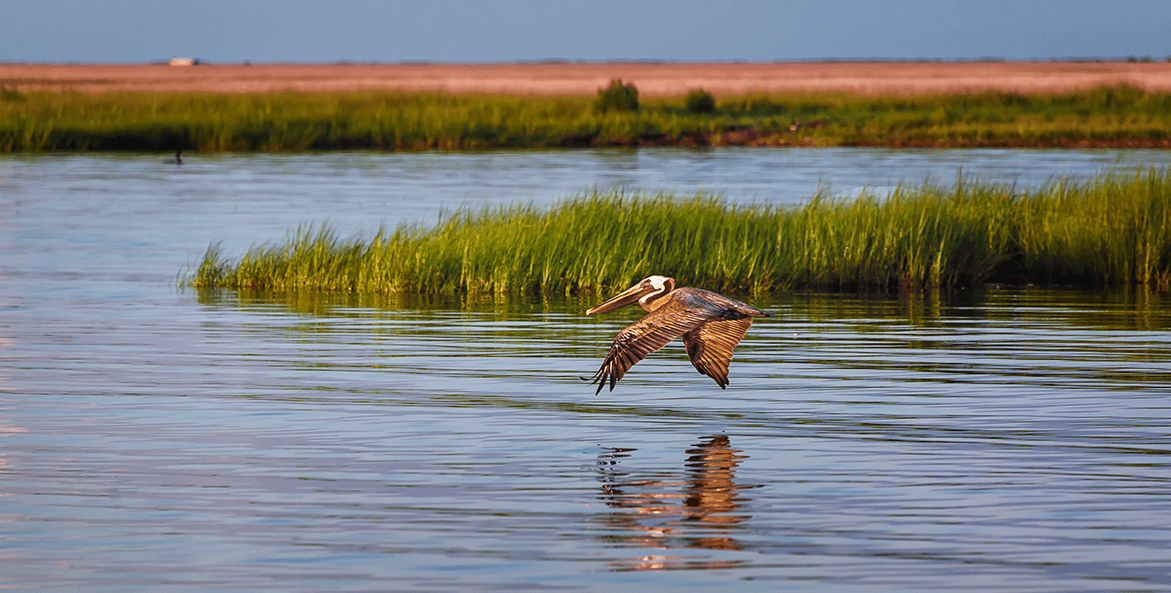 A pelican skims the surface of the water as he flies above a Smith Island, Virginia marsh.

Piece by piece, the Trump administration is quietly unraveling protections for our water and air. It all adds up to bad news for the Bay.

Take one brick out of a foundation, it’s barely noticeable. Take enough bricks out, the entire building can crumble. That’s what’s happening to the rules that protect our nation’s water, air, and natural resources—and it’s really bad news for the Chesapeake Bay.

Actions taken by the federal government in the past year alone will strip protections for thousands of miles of wetlands and streams across the watershed, allow more air pollution that harms our health and our climate, and create a rulemaking system for environmental protections that limits the consideration of science and doesn’t consider climate change at all. And those are just the big ones.

How does this happen? Changes to federal regulations.

As CBF’s Federal Legislative and Policy Manager, I’m a policy nerd. But I know for most people, it can be tempting to hear the word “regulations” and immediately zone out.

Regulations are the rules that agencies—like the Environmental Protection Agency (EPA) and the Department of the Interior—use to implement the laws written by Congress, including the Clean Water Act. In other words, if laws set the goal (i.e., clean water), regulations outline the details necessary to make it happen.

Despite the powerful role they play, regulations are typically a lot easier and faster to change than laws because doing so doesn’t require congressional approval. And they usually don’t get the same amount of attention that legislative changes, like the federal budget, or other big-ticket policy issues do. Instead, they happen out of the spotlight and often hide behind wonky titles (just a few examples—Emission Guidelines for Greenhouse Gas Emissions from Existing Electric Utility Generating Units; Revisions to emissions guideline implementation regulations; Revisions to New Source Review Program—wow!)

That makes them potentially dangerous, because they can make huge, real-life changes while getting lost in the shuffle. There have been so many regulatory changes recently that are bad for the Bay, it sometimes feels like the wolf is at the door. And while each small change might not seem like a big deal, they add up to real damage (I honestly can’t cover them all here, but you can get a full rundown and stay updated by visiting our regulatory page).

Still, while agencies have a lot of discretion, regulatory changes do have to go through a rulemaking process. By staying educated and involved, we as citizens can make a difference.

So as we enter a new decade and the 2025 deadline for the Chesapeake Clean Water Blueprint for restoring the Bay looms, it’s a great time to take a step back, look at how some of the recent changes add up for the Bay, and how we can fight back.

Losing Protections for Streams and Wetlands

Regulatory change: Repeal and replacement of the Clean Water Rule, also known as Waters of the United States,” or “WOTUS.”

What it is: In 2015, EPA established the Clean Water Rule to clarify protections for wetlands and small, seasonal, streams. The regulation was based on a thorough analysis of scientific evidence and was developed over a period of 200 days, following over 400 public meetings and over one million public comments.

Current status: EPA and the U.S. Army Corps of Engineers repealed the rule in the fall of 2019. We expect the agencies will soon announce a replacement rule.

UPDATE: On January 23, 2020, the Trump Administration unveiled a new definition of "Waters of the United States" that unravels safeguards in place since the landmark law was enacted in 1972. The new rule slashes federal protections for wetlands and waterways that are essential to restoring the Chesapeake Bay.

Why it matters: The new rule will affect an estimated 18 percent of ephemeral streams and 51 percent of wetlands nationwide. In Delaware alone, over 1,000 miles of streams and almost 200,000 acres of wetlands would be vulnerable to destruction.

This is really bad for the Bay. Streams and wetlands play a critical role in supporting the waters and diverse wildlife in the Bay watershed. They soak up storm surges, trap polluted runoff, and help slow the flow of nutrients, sediments, and chemical contaminants.

The Bay suffers from too much nitrogen. This excess nitrogen causes algae blooms that, when they die, consume oxygen leading to a reduction or lack of dissolved oxygen that is harmful to oysters, fish, and blue crabs. Approximately one-third of the nitrogen entering the Bay comes from air pollution, much of it in the form of nitrogen oxides (NOx) from power plants, cars and trucks, and industrial sources. In addition, excess emissions of carbon dioxide (CO2) are contributing to climate change which is also negatively impacting the Bay. EPA committed to cutting air pollution as part of the Chesapeake Bay Clean Water Blueprint, but these regulatory changes are setting back progress.

What it is: Established in 2015, the Clean Power Plan was the first-ever regulatory program to tackle carbon pollution from power plants.

Why it matters: If implemented, the Clean Power Plan would have cut carbon pollution from the power sector 32 percent below 2005 levels by 2030. In addition, we estimate implementation of another part of the prior regulations, the New Source Review program, would have kept 98,606 tons of nitrogen oxide (NOx) emissions out of the Chesapeake Bay each year. EPA’s replacement rule is woefully inadequate in its approach and will do little to achieve reductions in CO2 emissions from power plants. Some experts suggest that it may even lead to increases in emissions as compared to having no plan in place.

What it is: The programs regulate how far vehicles must travel on a gallon of fuel and the amount of pollution that can be emitted from vehicle tailpipes.

Current status: In September of 2019, EPA and the Department of Transportation withdrew California’s authority to develop its own GHG and Zero Emission Vehicle programs. Within the watershed, Delaware, Maryland, New York and Pennsylvania have adopted similar programs. We expect the two agencies to announce their replacement CAFE and emissions standards under a new rule soon.

Why it matters: If the 2017 and later CAFE standards were implemented, they would have cut highway emissions of NOx an estimated 904 tons in 2020 and 6,509 tons in 2030. In addition, under the administration’s proposal, vehicle CO2 emissions will increase an estimated 713 million metric tons over the lifetime of vehicles produced from model year 1979 to model year 2029.

The restoration of the Chesapeake Bay relies, in part, on reducing air pollution from power plants and the transportation sector. The repeal and replacement of the Clean Power Plan and the administration’s changes to the automobile CAFE and emissions standards will ultimately result in more NOx and more CO2 in the watershed.

Regulatory change: Proposed changes to the way regulations are developed.

What it is/current status: The Trump administration has introduced proposals that will restrict the types of science that can be considered in developing regulations, including seminal reports like Harvard’s Six Cities Study, which linked air pollution to reduced life expectancies. The proposals also change how agencies consider the costs and benefits (such as human health benefits) of environmental regulations.

Why it matters: If these proposals are finalized, federal agencies will not be able to protect the environment and human health to the degree that they could prior to the Trump administration.

Why it matters: There are numerous pieces to this proposal that weaken the review process and limit citizens’ involvement in issues that will impact their lives. Perhaps the most devastating change is the CEQ’s flat refusal to consider climate change when making decisions about major federal actions, like natural gas permits. Given all that we know about the impacts of climate change to the Bay—sea level rise, warming temperatures and extreme weather and the impacts they have on wildlife—turning a blind eye to the effects that these projects will have on climate change is downright irresponsible.

This is where citizens like you, and organizations like CBF, come in to hold the government accountable.

When an agency develops or changes a regulation, it has to provide an opportunity for interested stakeholders to submit comments. CBF has been submitting comments at a lightning pace and we are super grateful to you—our members and fellow lovers of the Bay—for submitting your own comments. We also meet with decision makers directly – we sit down with them and lay out how their proposals will impact the Bay. We do this to try to influence the outcome and STOP these changes.

Comments also help us build the record. Once a bad rule is finalized, there are only a few options for recourse. One of them is litigation, but by law, you can’t challenge a regulation unless you have engaged in the regulatory process when given the opportunity. So, we build the record.

Finally, when we have no other recourse, we get some coffee, sit down with CBF’s litigation department, and figure out a strategy for challenging the most egregious regulations.

To protect the Bay, we hope to restore the regulatory programs that have been cut—and maybe even improve them. You can count on us to keep watching, submitting comments, meeting with the administration, and litigating—and to let you know when something’s just not right. Stay tuned, there are several important proposals on the horizon. Thank you for reading and getting involved!