Communities Rise to the Climate Challenge 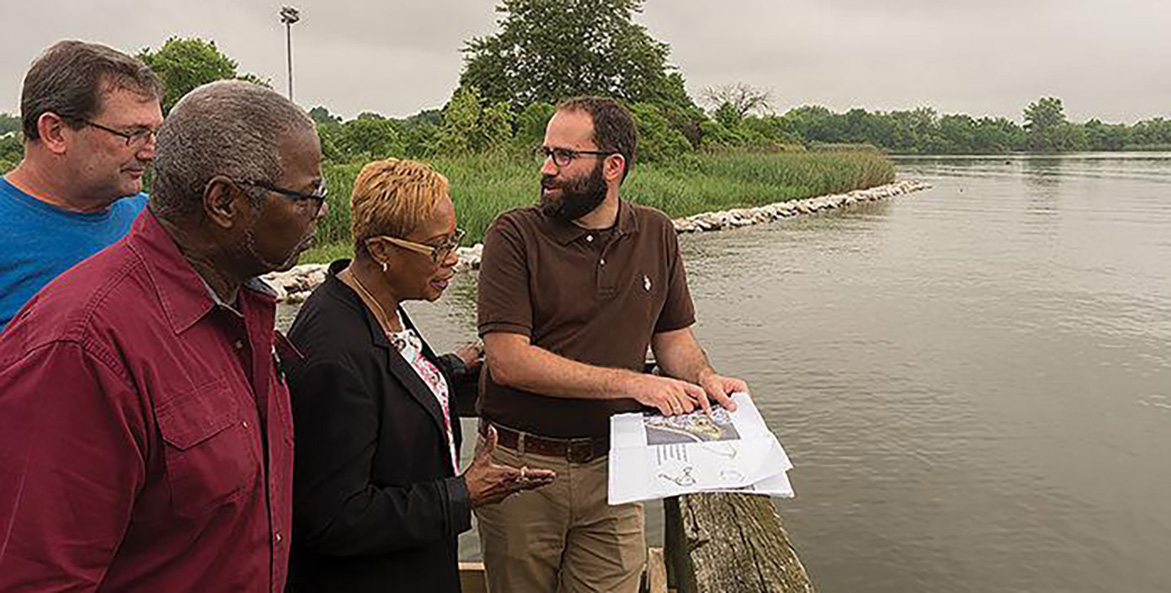 The sediments dredged from the bottom of Baltimore Harbor are a dark, soupy slurry that resembles black mayonnaise. Pollutants from the city’s industrial past long prevented the material’s use, but a growing scientific understanding of its toxicity—coupled with the gradual accumulation of cleaner sediments in the harbor—is generating new ideas to repurpose it for good.

In at least one case, it may help Baltimore County adapt to rising sea levels. The Fleming Park project, located in the historic Black community of Turner Station near the harbor’s mouth, proposes using dredged sediments to rebuild marshes and upland areas along the park’s shoreline.

The project aims to both protect the park from increasingly frequent tidal flooding and reconnect the community with its waterfront. “The area once thrived with stores, churches, beach life, and high-paying jobs fueled by the nearby Bethlehem Steel mill,” said Carmera Thomas-Wilhite, CBF’s Baltimore Program Manager. “But as the mill declined and finally closed in 2012, many residents lost their jobs. They’re on the front lines not only of the city’s economic changes, but also at the front lines of sea-level rise and flooding because of where they sit in the harbor.”

Turner Station Conservation Teams, the local nonprofit spearheading the project, has been examining the possible use of dredge material for shoreline revitalization for more than a decade. The group approached CBF for technical assistance to help get the Fleming Park project off the ground, and last November it earned a $500,000 grant from the Department of Transportation to conduct a feasibility study. The study, which is contingent on county approval, would include soil testing to make sure the sediments are safe, as well as engineering assessments to determine how much dredged material would be needed.

Eventually, the park could serve as a green jobs incubator, a jumping off point for environmental outreach and education programs, and an example for shoreline revitalization projects in other areas.

“The harbor’s resiliency plan is addressing stormwater and the way it’s moving through different properties, but it’s not always reimagining the harbor with a softer edge,” said Thomas-Wilhite. Instead of armoring shorelines with hard materials like riprap that do little to stop flooding from sea-level rise—which often comes up through storm drains—the Fleming Park project would create a “soft” edge with marshes that help soak up water.

Thomas-Wilhite continued, “That is something we’re hoping to do with this project that would be a model for projects going forward.”