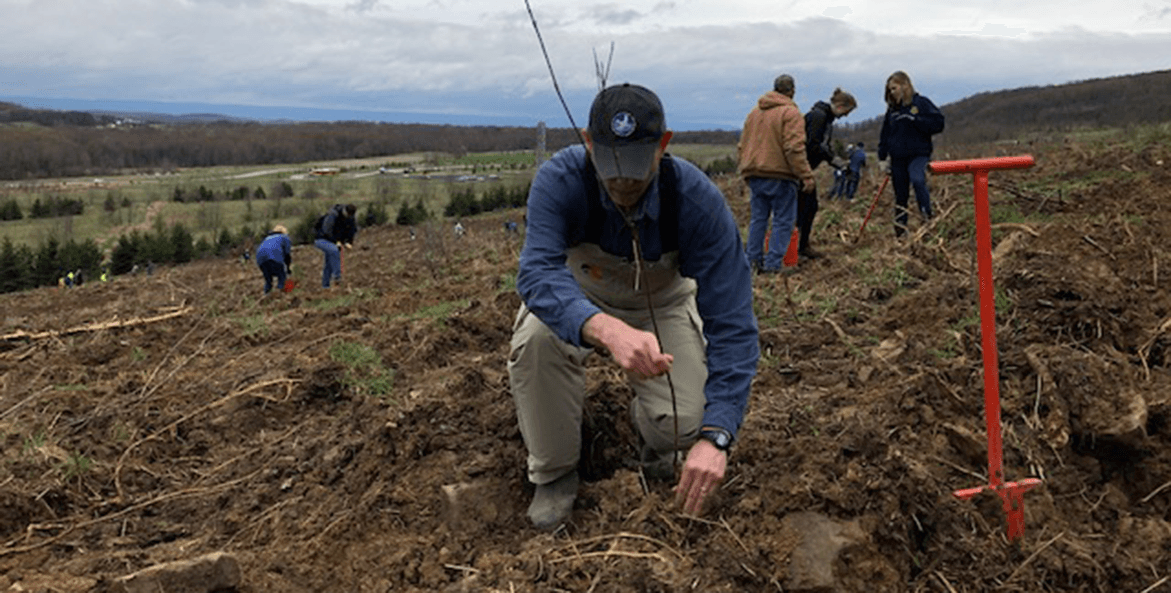 Like the scars left by bulldozers that tore through its compacted, earthy shell, impressions left by time spent on abandoned mine land are deep and lasting for those who were there to help it heal.

“It was really depressing to at first see the scarred, steep, barren hillside that couldn’t hold soil in place in a heavy rain, nor support any wildlife habitat, provide shade, or any of the other benefits of a forest ecosystem,” says Kelly O’Neill, CBF’s Agricultural Policy Analyst in Pennsylvania.

She and colleagues planted trees in what had been hard earth near Moshannon State Forest in Clearfield County in the spring of 2019.

“I was glad to be a part of reclaiming this land by planting a variety of native tree species that I hope are growing well now,” she says.

Elsewhere that spring, Caitlin Glagola planted saplings on a bare mountain that overlooks the Flight 93 National Memorial near Stoystown, PA. Unfortunately, COVID-19 restrictions forced cancellation of the Flight 93 planting this past spring as the effort relies on volunteers.

“I believe we have a duty to restore the sites we as humans have scarred, polluted, and destroyed,” Glagola says. She is CBF’s Watershed Coordinator in central Pennsylvania. “Planting trees, along with alleviating soil compaction and planting wildflower seeds, is a great way to help speed up the process of ecological succession and restore the landscape back to a dynamic, resilient, and healthy forested ecosystem.

Reforesting abandoned mine land at Stoystown, Moshannon, and elsewhere is a mission supported by the Keystone 10 Million Trees Partnership. CBF coordinates the partnership’s ambitious effort to plant 10 million trees in Pennsylvania by the end of 2025.

For spring 2020, the partnership distributed 18,400 trees for abandoned mine lands and the trees were planted successfully through contracted work.

The partnership has worked with the Pennsylvania Department of Environmental Protection (DEP), the Pennsylvania Environmental Council, and the Susquehanna River Basin Commission to provide trees to help rebuild forests on abandoned mine land. Adding trees helps to heal the land and reduce polluted runoff into local waters and the Chesapeake Bay.

Those who planted trees on the hill above ground hallowed by the tragic events of Sept. 11, 2001, were inspired by the experience.

“It was quite emotional being there to plant trees and honor the people who lost their lives on that tragic day,” says Frank Rohrer, CBF’s Restoration Specialist in Pennsylvania. “I felt, and sensed from others, pride in what we were doing and a sense of accomplishment, knowing that the trees we were planting would be a long-lasting tribute to the folks who were aboard Flight 93.”

DEP says Pennsylvania’s earth has given up more than 15 billion tons of coal. While coal mining was a backbone of the Commonwealth’s economy, it also laid bare large tracts of mountain forests and left a legacy of pollution. According to a recent report by DEP, 5,559 miles of Pennsylvania’s rivers and streams are impaired by abandoned mine runoff.

“Acid mine sites can have soil minerals containing heavy metals, such as sulfur, manganese, iron, and aluminum that can be toxic to terrestrial and aquatic wildlife,” adds Harry Campbell, CBF’s Science Policy and Advocacy Director in Pennsylvania. “Restoring the soils and planting trees can reduce the bioavailability of these other toxic compounds.”

Much of the land mined throughout Appalachia, especially before the 1970s, was inadequately or only partially cleaned up, threatening water quality and creating safety hazards for nearby communities.

“In places where the mining companies went out of business and the towns lost a lot of their jobs, there is no money left for them to do reclamation,” says Brenda Sieglitz, CBF’s Keystone 10 Million Trees Partnership Manager. “We can go back in there and provide the trees and help their landscapes get new life.” 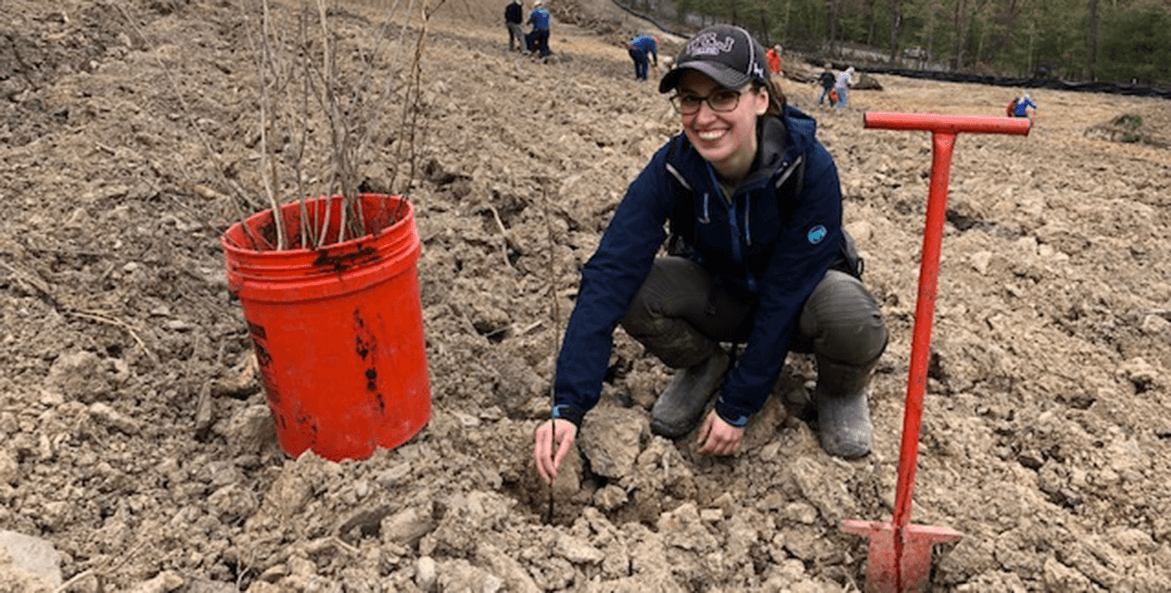 “This land was devastated many years ago when people didn’t understand the importance of a healthy ecosystem,” Kelly O’Neill adds. “Now we realize that the bare soil needs to be covered with native species of trees and other vegetation so that a variety of wildlife species may thrive. Those trees will also help improve the soil health, so water may infiltrate rather than running off and causing erosion.”

Cleanup practices used to involve capping the mines, packing down the dirt, and seeding the area with non-native grasses. The strategy of revitalizing old mine sites changed when the Appalachian Regional Reforestation Initiative (ARRI) was established in 2004 by the federal Office of Surface Mining Reclamation and Enforcement. The new approach is to re-establish native Appalachian forests that existed before mining activities.

It can be a massive undertaking as about one-third of the estimated 750,000 acres of abandoned mine lands nationwide are in Pennsylvania.

Reforesting mine lands is a significantly different process than planting streamside forest buffers on agricultural lands and in urban areas, where much of the partnership’s work has focused. Plantings on farmland or near urban parks require 200 trees per acre. Reforested mine sites can take upwards of 680 trees per acre.

Trees have a difficult time rooting in the hard-packed ground of old, barren mine sites that often resemble moonscapes.

Before planting, workers must first break up the earth. They use large bulldozers, dragging pieces of equipment called ripping shanks to create a pattern of deep furrows. This type of site preparation is typically done in the fall, which allows the soil time to settle before planting occurs in the spring.

The types of trees are carefully selected to maximize survival and create a diverse forest. The mix might include quaking aspens, various kinds of oak, white pine, and black cherry, as well as understory shrubs and trees like silky dogwood, black chokeberry, and American hazelnut.

“Occasional replanting may be necessary,” Frank Rohrer says, “but the survival is usually excellent and abundant natural regeneration is often present.

Working in the furrows on the hill at Stoystown provided a great reminder of the profound effects humans have on the landscape — both good and bad.

“I could see the Tower of Voices in the background and was constantly reminded of the 40 courageous lives and heroes of Flight 93, and how their legacy and bravery live on to this day,” Caitlin Glagola remembers.

“Trees, too, leave a great legacy on our landscape and our society,” she adds, “living on for many years and even long after the lives of those that plant them.”