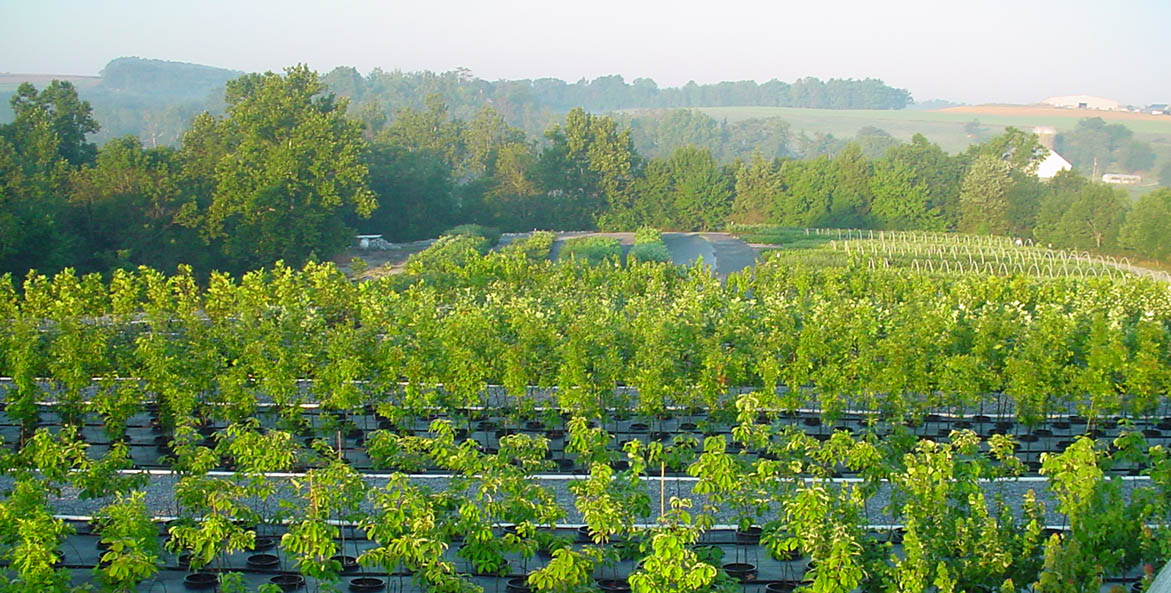 Significant purchases for the Keystone 10 Million Trees Partnership will pay off for businesses and clean water.

Success of the Keystone 10 Million Trees Partnership’s lofty goal of planting 10 million trees in Pennsylvania by the end of 2025 will depend on many hands and many trees. So CBF, which coordinates the Partnership, is planning ahead and preparing to spend about $2.6 million on 710,000 trees, shelters, and stakes to supply the effort for the next two years. Through an agreement called forward contracting, businesses submitting winning bids to supply the trees and resources will get economic boosts from guaranteed sales and the diversity of the plants will be expanded.

CBF issued a request for proposals (RFP) for 210,000 trees, stakes, and shelters for 2021 and 500,000 trees for 2022. Winning bids for the trees and supplies will be announced in July. RFPs for trees have been issued for single years since 2018, but forward contracting two years ahead is unique for CBF.

“Growers are going to sign a contract for a guaranteed thing,” Bill Chain, CBF’s Senior Agriculture Program Manager in Pennsylvania, said of the forward contracting. “There’s opportunity for them to have payment upfront and regularly through that growing period. So, they are minimizing risk. The economic viability of the grower is advanced by our action, and we’re right here at the right time, doing this.”

There is also an economic ripple effect. “Not only will forward contracting impact growers who work directly with us, but there will be secondary economic impacts,” says Brenda Sieglitz, CBF’s Keystone 10 Million Trees Partnership Manager. “The contractors that our partners may pay to do the planting work, the maintenance contractors caring for these planting sites in the future will benefit. There are a lot of businesses that offer peripheral support to this industry that through this will see that in coming years there will be ample projects that they could potentially bid on.”

Forward contracting is a win for the Partnership as well. “CBF is going to get trees for a good price and the species they want,” says Gregg Robertson, Government Relations Consultant for the Pennsylvania Landscape and Nursery Association (PLNA). The agency represents garden centers, wholesale nurseries, greenhouses, and landscape contractors.

“It’s going to benefit everybody and reduces the risk on both sides,” Robertson adds. “Our nurseries will be able to grow them, make a reasonable profit on them, and be sure they are going to get sold at the end of the season.”

For CBF, the latest RFP represents more than your basic tree purchases. “It’s leadership with values and shifting those values in the industry,” says Molly Cheatum, CBF’s Restoration Manager in Pennsylvania. “The idea is to shift this nursery industry to think more like a triple bottom line business.”

CBF responded to requests by statewide organizations and are asking for trees that are hard to find.

“One of the things we are doing with the forward contracting is to get growers to grow these trees that there is a demand for,” Cheatum says. “We are increasing the diversity of native tree selection in the state, which is huge.”

Bill Chain sees the selection of trees as a legacy gift to Pennsylvania. “They are diverse in being able to siphon off nutrients and hold back sediment,” he says. “But they are also pollinators that contribute to wildlife habitat.”

“We like to see our plantings have a mix of a minimum of 10 species per acre,” Sieglitz adds. “Those 10 species spread out among 200 trees gives us a great ecological wildlife benefit.”

A spectrum of native species is good for people, too. “We’re also trying to bring back the native, fruiting plants like the pawpaw, elderberry, and persimmon,” Cheatum adds. “They have health benefits.”

Some native plants can be good for the pocketbook.

“People often don’t think about fruit-bearing trees and shrubs other than the orchard varieties, but there are many wild varieties available,” Sieglitz says. “We have a partner doing a lot with elderberry for use in consumer end products. The landowner could harvest those fruit and nut bearing trees and make an income.”

The cost of trees is just one consideration in choosing winning proposals.

“We’re trying to shift the industry toward growing more locally and improving the local economy,” Molly Cheatum says. “But not only in shifting where they are growing the trees, but trying to get businesses to think more ecologically, economically, and community-focused.”

Bidders get points for conservation and sustainability plans on their own landscape. Cheatum mentioned a grower that takes care not to cause ecological damage to wetlands downstream as they grow their stock.

Seed origin is important. “Getting to the heart of where the trees are coming from helps us make sure we are getting the correct native variety and reducing the risk of pests,” Cheatum says.

Growing trees in Pennsylvania from seed to shipping is a plus for a grower. “Some practices start here, take them away and then bring them back,” Cheatum says. Growing trees in one location reduces the carbon footprint.

There is also a ranking for community projects by bidders. Cheatum noted that some provide jobs to the local Plain Sect community. “These businesses are thinking community-wise, ecologically, and they are making money,” she says. “That’s where we want our money to go.”

Selection criteria also gives points toward nonprofits in order to help build the workforce and support less-advantaged populations. Points are also given to women, veterans, members of underrepresented groups, and small businesses.

“At these numbers of trees, forward contracting is important if growers need to upscale to meet capacity,” Robertson says. “Without it, growers wouldn’t be as willing, given the 2008 recession, and they are conservative by nature. They don’t want to over-plan, to throw away trees or chip them up.”

Sieglitz said some growers have already purchased additional property and stock in hopes of procuring contracts. “For those who have been thinking about going into business or diversifying, this will be a good opportunity for them to do so without taking on financial risk,” she says.

“Because we are doing a three-part payment with 30 percent upfront, it would allow growers who are interested in expanding their operations to put that money toward the investments they need to expand to meet our deliveries,” Sieglitz adds.

She sees the security of forward contracting as a jobs initiative. “Economically, it also allows growers to retain or even add employees as they expand their operations,” she says.

The security of CBF’s forward contracting made the latest RFP attractive to a conservative industry still affected by the housing crisis of 2008, when there was little need for nursery stock and services.

“We were a little overconfident in the early 2000s and there was a lot of plant material available. Many of the larger nurseries were highly leveraged and they decided to borrow money,” Robertson says. “We lost a lot of nurseries that had been in the business for generations. The ones that remained did so because they were fiscally very conservative.”

Robertson says the industry, as with other agriculture, is a roll of the dice. “It doesn’t matter what you are growing, you are dealing with nature and you are dealing with markets that may change,” he adds. “To the extent you can provide any sort of stability or certainty to that marketplace, that’s going to benefit buyers and sellers.”