Don't Forget Your Meat Tenderizer, Jellyfish Have Invaded the Chesapeake 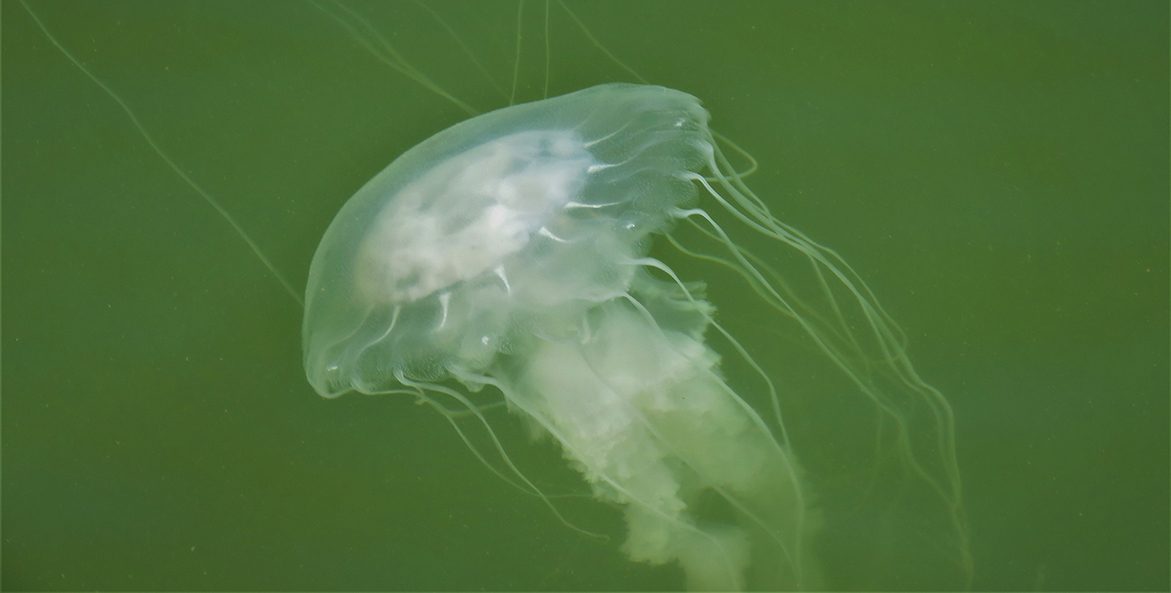 Sea nettles, Chrysaora quinquecirrha, are one of three jellyfish species found in the Chesapeake Bay.

As if we needed another thing to worry about in 2020, sea nettles (jellyfish) have taken over a large portion of the Bay.

Headed to the Bay? Better pack the meat tenderizer or baking soda in your beach bag. No, we’re not kidding.

From Cape Charles, Virginia, all the way up to Annapolis, Maryland, sea nettles (jellyfish) are everywhere this year. While it’s still undetermined if they’ve in fact increased in numbers this year, it sure seems like it compared to recent memory.

What brings them further up the Bay?

Unlike some other species of jellyfish that transition between the Atlantic and the Bay, sea nettles are a true Bay native—they never leave. We spoke with Dr. Raleigh Hood, a biological oceanographer and professor at Horn Point Laboratory, and it seems to be that a variety of factors push them further North.

For one, it’s been a dry year compared to the onslaught of rain the Bay region has received in years past. This limited rainfall means less fresh water washing into the Bay from its many tributaries, keeping the salinity of the water higher further up the Bay and allowing for perfect conditions for sea nettles (they prefer 10–20 Practical Salinity Unit [PSU]).

It’s also been HOT. If you’ve been in the Bay recently, it almost feels like bath water. Along with sea nettles’ very narrow range of salinity, they also have a narrow temperature range—about 79–86° F. The current Bay conditions are giving nettles the perfect conditions to grow their territory this year.

Impact on the Bay ecosystem

The jury is still out on how an abundance of sea nettles impacts the Chesapeake Bay ecosystem, but scientists know they play a significant role in the planktonic food chain. Along with plankton, sea nettles also eat small fish, worms, and crustaceans. Their tentacles are covered in stinging cells called nematocysts, which stun or kill prey. The nettle uses its oral arms, which hang from the center of the bell, to move food to its mouth.

When oysters are in their floating larval stage—during summer months—they are prone to predation by nettles and comb jellies (a non-stinging, distant cousin to the jellyfish also seen in the Bay this time of year). Although both eat larval oysters, the sea nettle spits them out unharmed and actually helps protect baby oysters by eating the oyster larvae-loving comb jellies.

To the chagrin of all of those that love a good summer Bay swim, it turns out nettles have few natural predators (sea turtles being one), so their abundance is more affected by rain and heat. According to Dr. Hood, once the water temperature cools below about 59° F, the sea nettles will lose their ability to swim, sink to the bottom of the Bay, and dissolve—typically in October.

What to do if you get stung

According to Seattle Children’s hospital, baking soda is the way to go. They explicitly recommend not using vinegar on Chesapeake nettle stings. Their advice is to rinse the area with a mixture of Bay water and baking soda for 15 minutes to stop the stingers from stinging if still attached to the skin. Then, remove small stingers by scraping or shaving the area.

Another tried and true method? Meat tenderizer according to our staff. The papain enzyme found in most meat tenderizers helps break down the protein found in jellyfish venom to reduce swelling, pain, and itching. But keep in mind that neither of these remedies have been scientifically tested on our local breed of sea nettles. Over 100 varieties of jellyfish flourish worldwide, and research suggests that many of their stings react differently to the same treatment agents.

So next time you go swimming, first check the NOAA probability map and while in the water, keep your eyes peeled on the water around you to avoid contact. Oh, and don’t forget the meat tenderizer just in case.