Are There Sharks in the Chesapeake Bay? 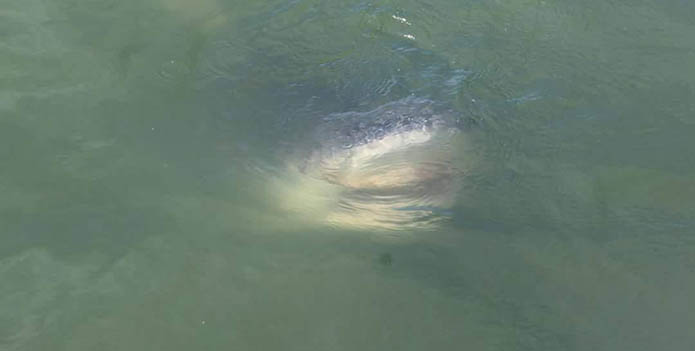 This bull shark was spotted in Tangier Sound in September of 2016.

The best way to beat the summer heat? A quick jump in the Bay! But how likely are you to hear the Jaws theme song once you make the plunge?

According to the Chesapeake Bay Program, there are at least 12 species of sharks found in the Bay. While some are quite abundant, others are very rare. The five most common sharks in the Bay include the sandbar shark, bull shark, sand tiger shark, smooth dogfish, and spiney dogfish.

You may have heard of the bull shark before, as many shark attacks have been attributed to them and their aggressive nature. But they are only an occasional summer visitor to the Chesapeake Bay (reaching as far north as the Patuxent River) and are not a significant threat to human safety as long as they’re not provoked. In fact, the appearance of these top predators is a sign of a healthy, rebounding ecosystem.

Other common sharks like the sandbar shark and the smooth dogfish are much like the people of the Chesapeake Bay region: they love to munch on blue crab (they also eat other Bay critters like rays and large fish). In fact, the Bay is one of the most important nursery areas on the East Coast for young sandbar sharks.

Scared of a bite? Don’t fret! According the Maryland Department of Natural Resources, there has never been a recorded shark bite in the Chesapeake Bay. You’re actually more likely to die from a lightning strike than a shark attack.

But when swimming in the ocean, Coastal Bays, or even Chesapeake Bay, folks should keep in mind that they are entering the habitat of sharks. Here are some tips:

If you see a shark in the Bay, after moving a safe distance away, please make sure to report it to Maryland Department of Natural Resources or the Virginia Department of Wildlife Resources.