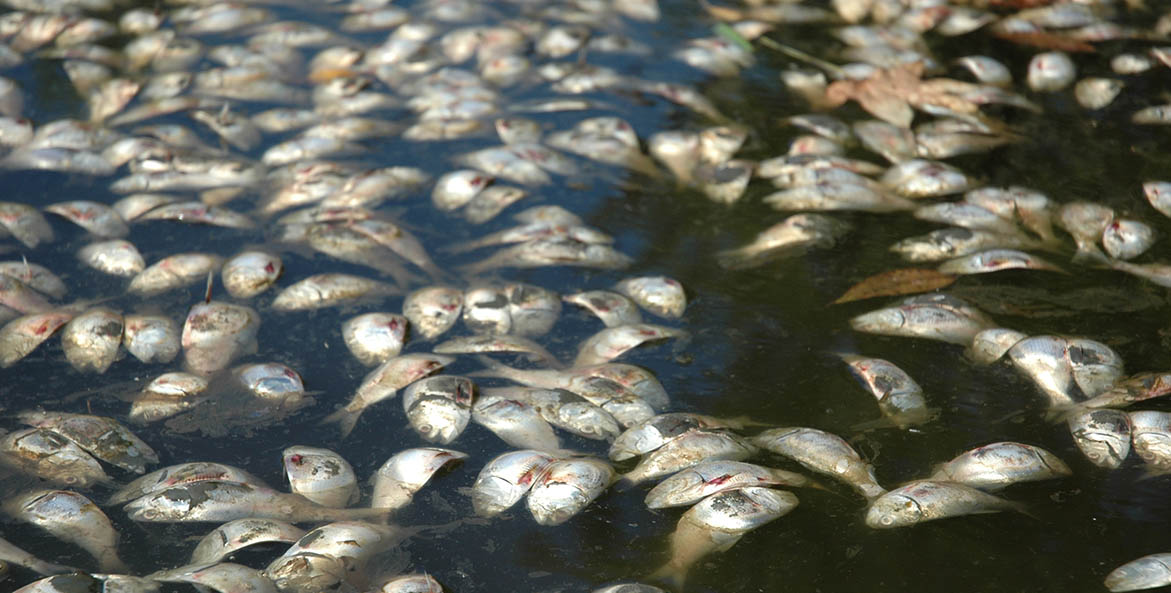 Dead zones and algal blooms, which rob our waters of oxygen, often result in devastating "fish kills" like this.

Each year during the summer, an area of water with low oxygen levels—known as a “dead zone”—forms in the Bay. We asked Dr. Beth McGee, CBF’s Director of Science and Agricultural Policy, about this year’s dead zone and what it means for the Bay.

What is a “dead zone” and why does it matter for the Bay?  What are some potential effects on fish, wildlife, and humans?

Just like air, water contains oxygen. A dead zone is an area of water where oxygen levels are too low to support aquatic life. These areas can form in both the Bay’s mainstem and its tidal rivers, typically in deeper water near the bottom during the summer months. While not a direct threat to humans, dead zones can by just that—deadly—to fish, crabs, oysters, and other aquatic animals that literally suffocate when there is not enough oxygen in the water.

What does the latest dead zone report for the Bay show this summer?

The Maryland Department of Natural Resources released their most recent report about the extent of the Bay’s dead zone on July 27. Monitoring data through the early part of July, which is typically the month when the dead zone reaches its largest extent, showed the dead zone in Maryland’s portion of the Bay’s mainstem covered a volume of 1.35 cubic miles of water. That’s consistent with researchers’ predictions of a slightly smaller than normal dead zone this year.

What trend are we seeing long-term in the Bay’s dead zones, and how does this year fit into that trend?

Over time, the Bay’s dead zones are getting smaller, but there can be significant variation from year to year due to changes in weather. For example, more rain during the spring months can wash more pollution into rivers like the Susquehanna, the Bay’s largest tributary, leading to a bigger dead zone. This year’s dead zone is in line with the average size recorded since 1985, though it is much smaller than last year’s dead zone, which followed a period of record-setting freshwater flows into the Bay in late 2018 and early 2019.

What does this year’s dead zone, as well as the long-term trend, tell us about the health of the Bay?

Shrinking the dead zone is one of the primary goals of the Chesapeake Clean Water Blueprint, the federal/state partnership to reduce pollution and restore the Bay to health. It’s encouraging to see that this year’s dead zone dropped back to average levels following last year’s larger than normal dead zone, but its persistence shows that the Bay is still out of balance and we still have a lot of work to do to reduce pollution.

What are the primary factors influencing the size of the Bay’s dead zone, and how can we help improve them?

The Bay’s dead zone is driven largely by the amount of nitrogen and phosphorus pollution that reaches our waterways. The pollution feeds blooms of algae in the Bay downstream. When the algae die, they sink to the bottom and are decomposed by bacteria—using up oxygen in the process. While weather (rain and snow) have an influence on these pollution loads, so do human activities. The best way we can reduce algal blooms and dead zones is to implement the Blueprint by putting in place best management practices that control pollution from urban and agricultural lands, as well as wastewater treatment plants. This includes things like planting trees as buffers along rivers and streams, improving soil health on farms, and reducing the amount of hard surfaces in cities.