Blue Crabs: How Are They Doing? 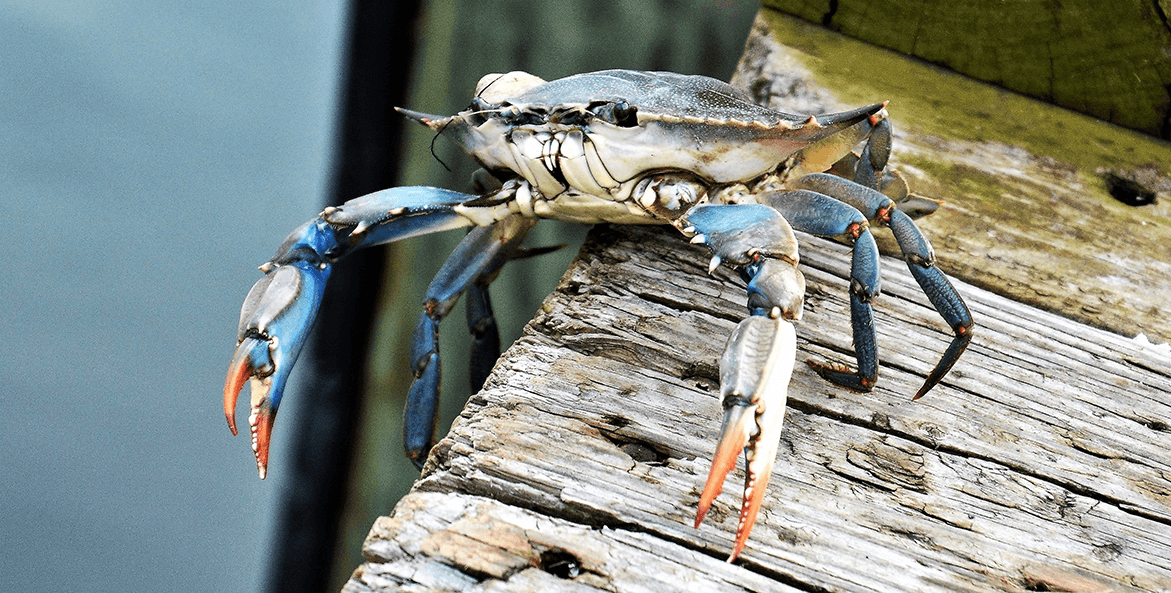 Blue crabs are known far and wide as a symbol of the Chesapeake Bay region. We asked Chris Moore, CBF’s Senior Regional Ecosystem Scientist, for an update on the current status of this ecologically important (and delicious) crustacean.

Blue crabs are possibly the most iconic Chesapeake Bay species. Known as the "beautiful swimmer," the blue crab is one of the more resilient of Chesapeake Bay species, but it faces constant challenges to survive: predators, dead zones of low oxygen, vanishing habitat, and at times cold winters, to name a few.

Blue crabs support one of the Bay’s most valuable commercial fisheries and a large recreational fishery. The also serve many important roles in the Bay food web. As larvae they are preyed upon by numerous filter-feeders, such as menhaden. As they grow older, crabs feed upon a variety of smaller bivalves that live on the Bay floor. Eventually, many crabs are then preyed upon by larger fish species.

What do we know about the current status of blue crabs in the Bay?

Each winter, Maryland and Virginia partner on a winter dredge survey, which produces an estimate of the number of blue crabs in the Chesapeake Bay and its tributaries. This is one of the most comprehensive surveys of any species we have in the Chesapeake Bay. The survey was started in 1988, which provides over 30 years of data on the trends in the blue crab population. The survey is usually conducted December through March with the results being released around late April.  Beginning in 1997, a comprehensive review of those results is completed annually by the Chesapeake Bay Stock Assessment Committee and released in early July.

The blue crab population fluctuates annually based on a variety of factors, including reproductive success, weather, and predation. In general, the population has been more robust since a new Bay-wide management plan was agreed to in 2008. One of the best indicators of this increased abundance has been the fact that we have been above the target abundance for adult female blue crabs twice since 2008, after exceeding it just once between 1990 and 2008.

First, the long-term trend tells us that the blue crab population will respond positively to management actions. Second, although things are much better than they were, there’s still room for improvement.

There are a number of positive effects of a healthier blue crab population. First—and what is probably on the minds of most people living in the Bay watershed—is the benefit that there will be more crabs to catch and eat. From an ecosystem perspective, blue crabs of all sizes serve as forage (food) for a wide variety of fish, birds, and, yes, even other blue crabs (blue crabs are quite cannibalistic). Some of the more common Bay species that eat blue crabs include red drum, croaker, blue catfish and cobia. In fact, cobia are such voracious predators of blue crabs they are sometimes referred to as “crabeaters”.

Blue crab populations are influenced by a variety of factors, from water quality to predation to habitat availability and even hurricanes. Especially for young and female crabs, underwater grasses represent one of the most important habitats for foraging and protection. Crab habitat is also affected by what is commonly termed “dead zones”— areas of little or no oxygen that rob blue crabs of both food sources and areas to hide from predators.

Improving water quality and restoring habitats such as oyster reefs are two things that also will help the Bay’s blue crabs. Reducing the levels of nutrients reaching the Bay from farms and lawns, and better managing polluted runoff before it gets into rivers and streams, will help mitigate weather extremes, improve water quality, and contribute to a healthier and more vibrant blue crab population.