Oysters: How Are They Doing? 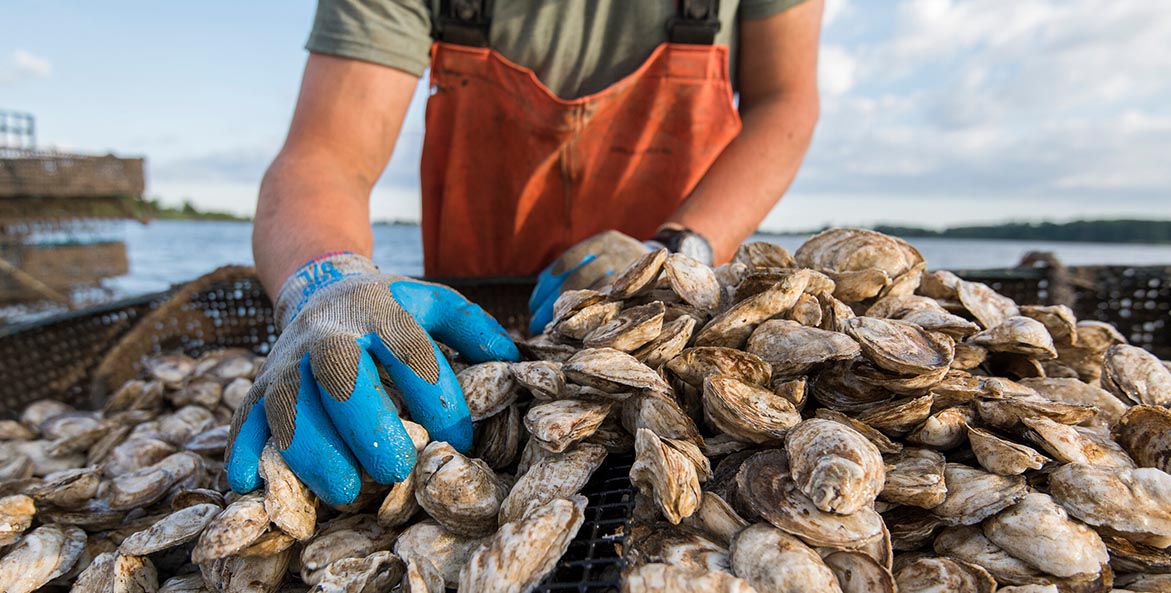 An oyster farmer sorts through a fresh batch of oysters.

Oysters are one of the watershed's favorite delicacies and key in our efforts to save the Bay. We asked Allison Colden, CBF’s Maryland Fisheries Scientist, for an update on this important (and delicious) bivalve mollusk.

What are oysters and why are they important for the Bay?

Oysters are a critical component of the Chesapeake Bay ecosystem, known as a keystone species. The reefs oysters form provide important habitat for the Bay’s fish, crabs, worms, and other organisms. Oyster are also prolific filter feeders that remove light-blocking algae from Bay waters, facilitate removal of excess nutrients, and improve water quality for other organisms.

What do we know about the current status of oysters in the Bay?

Currently, oyster populations in the Bay are at a small fraction of their historical population size. Over the years, overharvesting, pollution, and disease have contributed to the oysters’ decline.

Earlier this summer, Maryland’s Department of Natural Resources released an update to its 2018 oyster stock assessment for the state’s portion of the Bay that showed the number of market-size oysters (larger than three inches) in 2020 was about 400 million, compared to approximately 300 million in 2018. We’re still concerned the increase in market-size oysters may be temporary, though, because the estimated number of oysters less than one year old is the sixth lowest recorded since 1999—about 275 million oysters. The reality remains that oysters in the Bay are at perilously low levels compared to historic populations.

What are the long-term and short-term trends we are seeing with oysters?

Unfortunately, oyster populations have remained at low levels for many years. In some areas, populations are continuing to decline. The exceptions are areas in which large-scale oyster restoration has been carried out in an effort to bring back oyster reefs and restore their function in the ecosystem. In 2014, Maryland and Virginia each committed to restoring oyster populations and reef habitat in five rivers in each state by 2025. In areas where these efforts are taking place, we are starting to see the benefit of increasing oyster populations and stable or growing reef habitat. In Maryland, restoration efforts are now complete in two out of five rivers and Virginia has completed restoration in one river.

What does the current status of oysters, as well as the long-term trends we are seeing, mean for the health of the Bay? What are some potential effects on fish, wildlife, and humans?

More oysters equal better water quality. Without oysters, the quality of the Bay ecosystem suffers. Without oyster filtration clearing the water for light to penetrate, bay grasses and macroalgae can struggle to grow. Without oyster reef habitat that provides refuge from predators and ample prey to feed on, juvenile fish and crabs may not survive to adulthood. Without a thriving oyster population, the seafood industry that has relied upon Chesapeake Bay oysters for hundreds of years will continue to struggle. The good news is that when we bring back oysters, all these benefits come back with them.

What are the primary factors influencing oysters, and how can we help improve them?

Pollution, habitat loss, overharvesting, and disease are the primary factors limiting oyster recovery in Chesapeake Bay. Full implementation of the Chesapeake Bay Clean Water Blueprint is the primary means by which we can achieve improved water quality, hopefully leading to fewer and smaller dead zones and smothering sediment that threaten oyster survival. Until oyster populations improve enough to replenish oyster reefs on their own, we will need to continue restoration efforts by placing shell and juvenile oysters on the bottom to kickstart the process. It is important to always recycle your oyster shells and support restaurants that participate in shell recycling programs as shell is one of the biggest limiting factors in oyster restoration.