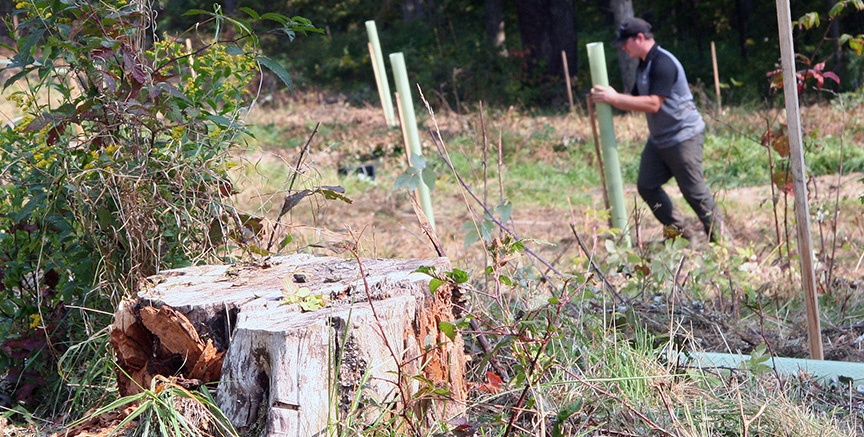 Only stumps remained after five acres of the North Harford Maple Farm were taken by eminent domain for a now cancelled pipeline project.

After trees were clear-cut for a now defunct pipeline, a Pennsylvania maple farm is being restored.

Maples and oaks planted on a hillside in Susquehanna County, Pennsylvania are sweet examples of the protective and healing powers of trees.

In 2016, the Holleran family refused to permit the Constitution Pipeline to cut through their property near New Milford. A large portion of the family’s maple syrup business in northeastern Pennsylvania was about to be tapped out. The Hollerans began the fight for their property, but five acres of their North Harford Maple Farm were taken by eminent domain.

Crews, accompanied by federal marshals wearing bulletproof vests and carrying semi-automatic weapons, cut down about 560 trees to make way for the pipeline. The downed trees, many of them hundreds of years old, littered the hill for a full year. Stumps remain today.

As the Hollerans’ lengthy legal battle continued, the state of New York blocked the pipeline by not issuing permits. The pipeline project was out of gas. 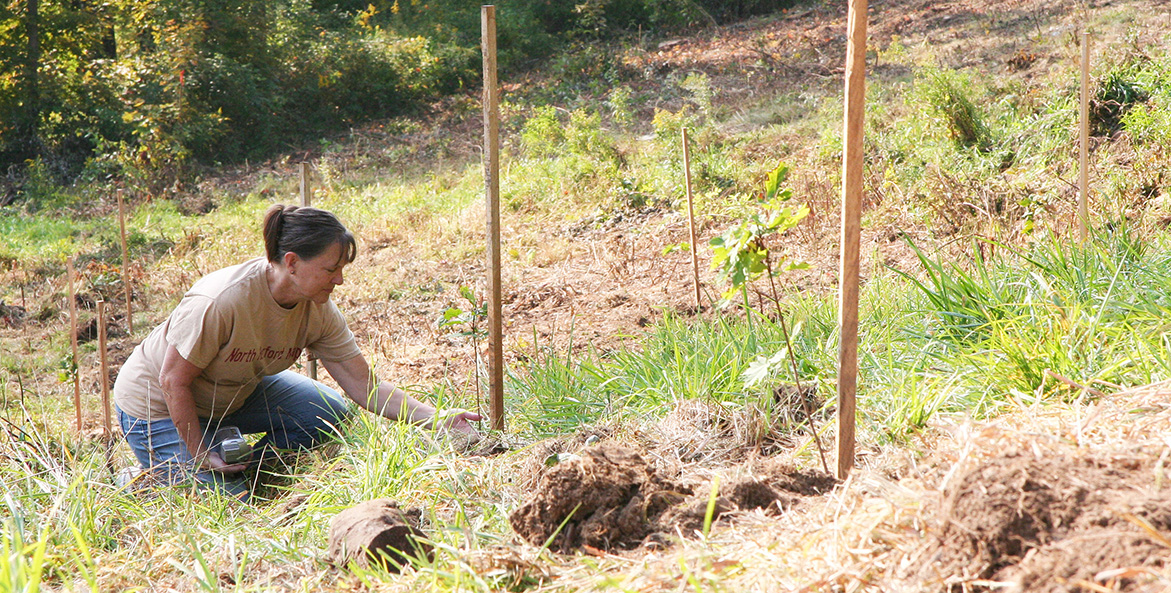 Williams Companies, the Oklahoma energy giant who was running the project, abandoned the Constitution Pipeline. A court vacated the eminent domain and the Hollerans and farm co-owners, the Zeffer family, got a settlement and their scarred property back.

200 red maples, sugar maples, and red oaks provided by the Keystone 10 Million Trees Partnership, coordinated by CBF, were planted to replace what was not returned to the family—their precious trees.

“This is a wonderful thing for us to get this planted and restore the trees,” said co-owner Catherine Holleran, whose family has owned the farm for 70 years. “Hopefully for the next generation, the maples will be back, and we can use those again.”

According to Holleran, maple trees can take 40-50 years to mature and reach a minimum diameter of 10 inches before they can be tapped.

“The partnership is proud to provide the sugar maples to replace the precious resource that was lost in 2016. But these replacement seedlings will take decades to make up for the ecosystem services those large ancient trees provided,” says CBF’s Brenda Sieglitz, who manages the Keystone 10 Million Trees Partnership. “Those benefits include water filtration, clean air, carbon sequestration, and economic resources through their local sugar maple business. Protection of our tree resources is as important as planting new trees.” 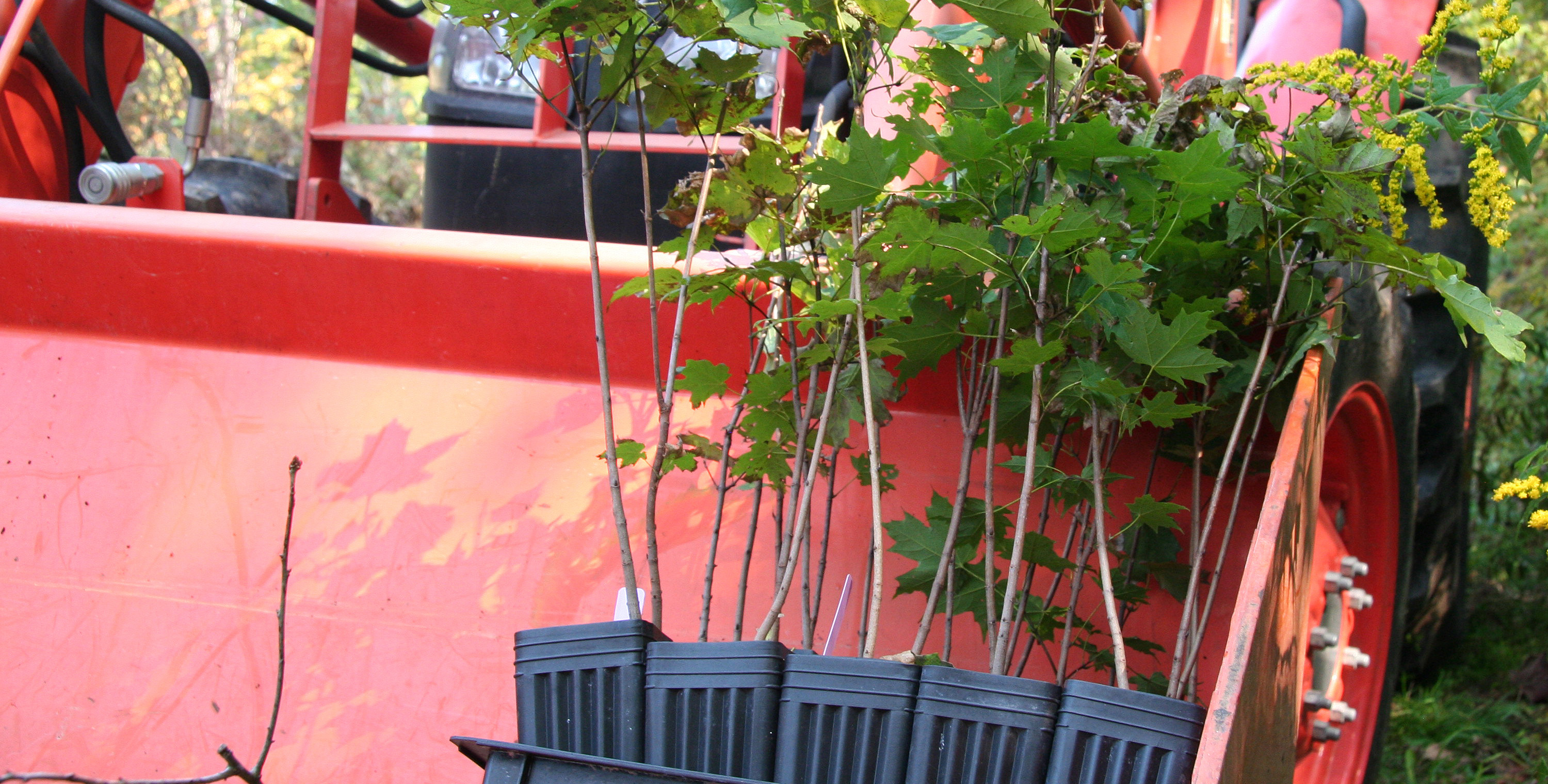 The partnership was launched in 2018 and has 147 partner groups. Its ambitious goal is to plant 10 million trees in the Commonwealth by the end of 2025.

“We are planting trees on this portion of the farm to try to re-establish close to the stand of forest that was here before it got cut,” says Nathan Harpster, Watershed Specialist for the Susquehanna County Conservation District. “The family was using this hillside as a maple grove for syrup, so we tried to plant as many sugar maples as we could.”

Harpster coordinated the effort and said a watershed forestry grant from DCNR went to pay Hickory Hill Restoration of Montrose, PA, to do the planting within the five-acre swath.

“It’s wonderful that we had places and resources that we could reach out to that would help to do this planting,” Holleran adds. “I don’t know how we would ever do this on our own. We have people that were interested just to come today to see the replanting of trees. This is a great day.”