Global Pandemic or Not, We Won’t Stop Putting Oysters in the Bay 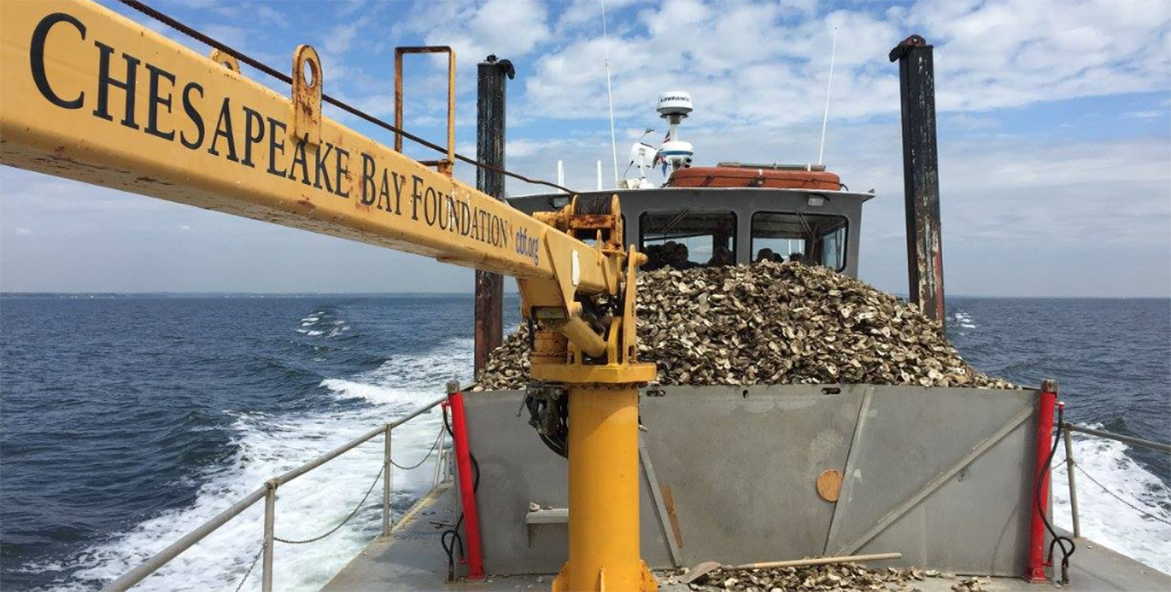 CBF's oyster restoration vessel, the "Patricia Campbell," motors across the Bay with 4 million oysters on its deck to be planted in the Little Choptank River on a sanctuary reef in the spring of 2016.

In the face of unprecedented challenges, we worked with partners to complete one of the world’s largest oyster restoration projects in the Little Choptank River

It was roughly five years ago when I found myself on the deck of the Patricia Campbell, CBF’s one-of-a-kind oyster restoration vessel, heading back across the Bay after a day of planting 4 million baby oysters on a sanctuary reef in the Little Choptank River. It was the first warm day of spring as I recall, and CBF staff and volunteers aboard were basking in the newfound sun and the utter satisfaction of a rewarding day on the water off Maryland’s Eastern Shore.

Now, a little less than five years and one global pandemic later, the Little Choptank oyster restoration project is one of the largest in the world. Despite the unprecedented challenges that COVID-19 brought, the vital work of putting water-filtering oysters back in the Bay continued, and late last summer, the Little Choptank project was completed. With 2 billion baby oysters on roughly 358 acres of restored reefs, the Little Choptank oyster sanctuary is even larger than the National Mall in Washington, D.C. And of those 2 billion, CBF alone seeded 64,130,986 spat-on-shell (or baby oysters)—the largest amount CBF has ever placed in a single sanctuary to date.

Restoring the Bay is intrinsically tied to restoring its native oyster population. In addition to providing critical habitat for iconic Chesapeake critters like rockfish and blue crabs, oyster reefs do much for water quality, with one adult oyster able to filter and clean up to 50 gallons of water a day. But after years of overharvesting and pollution, the oyster population across the Bay is just a tiny fraction of what it once was. That’s why this work is so important.

The Little Choptank River joins Maryland’s Harris Creek and Virginia’s Lafayette (as well as an additional bonus tributary, the Eastern Branch of the Elizabeth River in Norfolk) as a restored river in terms of large-scale oyster restoration. The remaining rivers to be restored under the Chesapeake Bay Watershed Agreement Goal are the Tred Avon, Upper St. Mary’s, and Manokin Rivers in Maryland, as well as the Great Wicomico, Lower York, Lynnhaven, and Piankatank Rivers in Virginia.

Karl Willey, manager of CBF's Maryland Oyster Restoration Center (MORC) and captain of the Patricia Campbell found the Little Choptank River one of his most interesting projects. “The Little Choptank is the furthest distance away from MORC than any of the targeted tributaries that CBF has contributed to. When the Patricia Campbell motored into the Little Choptank, it felt like we went back more than 100 years, with very little development. Nothing but treelined shorelines and watermen working the bottom for crabs.”

Finishing the work in the Little Choptank, however, was no easy feat. “As soon as we became aware of the pandemic in early March of last year, we took immediate action to change our oyster restoration operations to ensure the safety of staff and volunteers,” said Doug Myers, CBF’s Senior Maryland Scientist. “What we didn’t do is halt the program. Instead, we worked within safety guidelines and continued planting millions of water-filtering oysters in the Bay. We’re so thankful to our dozens of volunteers who were able to assist our efforts during these trying times by helping to pick up and clean recycled shells.”

One such volunteer, Jim Ridgell, is a native Marylander and dedicated CBF volunteer, coming out week after week to our Oyster Restoration Center in Shady Side, Maryland. For more than a decade, Ridgell has been helping clean shell, load up oysters, or whatever else needs doing. Last year, though his volunteer time with us slowed due to the pandemic, it did not stop. "It's not about the oysters so much," Ridgell said, "It's about helping the Bay—something that's given me so much in my life. It's about giving back to something you love.” On that day five years ago on the Little Choptank, one of Ridgell’s tasks included shoveling oysters onto a conveyer belt, which ran to the bow of the Patricia Campbell where they were then gingerly spread across the water. After his work was done, he stood on deck staring out at the flat, endless Bay stretched out before him. Muddied hands by his side, comforting hum of the diesel engines at his back, he said “there's just something about being on the water . . . you're in a different world.” We couldn’t agree more.