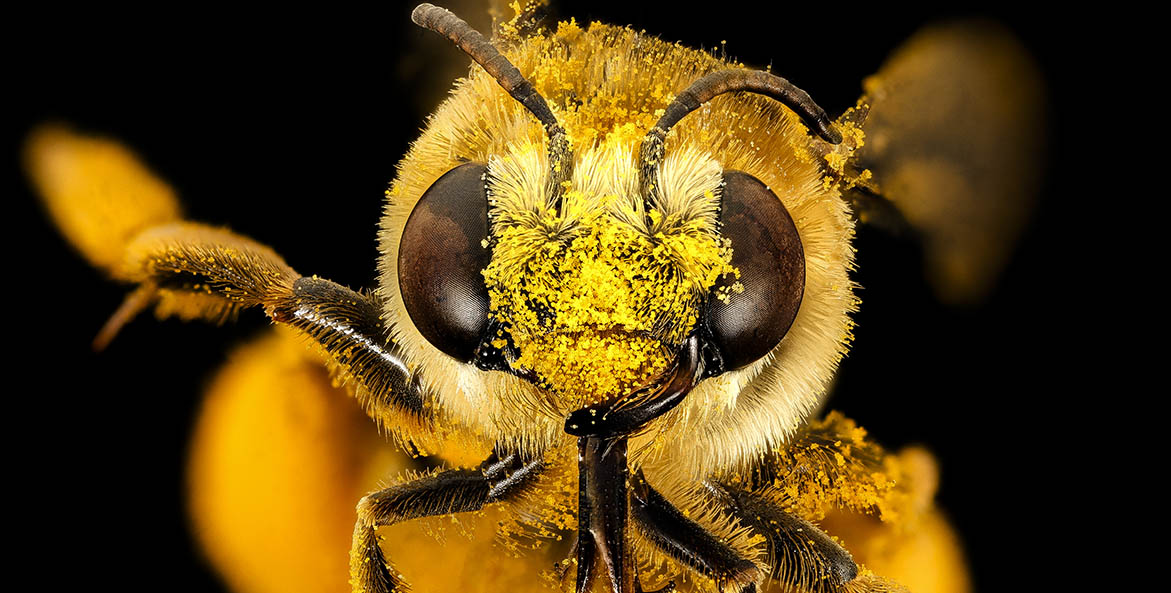 “The fact is,” says Achim Steiner, Executive Director of the United Nations Environment Programme, “that of the 100 crop species that provide 90 percent of the world’s food, over 70 are pollinated by bees.” The bushy hairs on the hind legs of this Deep South Svaatra (S. petulca), are designed to carry dry pollen, which it moves from plant to plant. This cross-pollination process is critical to our food production.

Bees are critical to our culture, economy, and environment. So why are we losing them at an alarming rate?

On a predictably gray February day, I find myself in front of a squat, non-descript building just west of Bowie, Maryland, with the words “Bee Lab” etched in colorful mosaic tile above the door. I’m here to meet Sam Droege, a wildlife biologist at USGS Patuxent Wildlife Research Center, who has been studying bees and nature most all of his life. “Paperwork is my job, looking at bees is my hobby,” says Droege within moments of meeting.

Inside the Bee Lab, stacks upon stacks of what look like pizza boxes line the walls. Each box contains roughly one hundred bees pinned with a scannable code that points to an electronic catalogue with an abundance of bee information. Droege and his team of interns and volunteers have been collecting and documenting this information for years—Droege started in the early 2000s. All told, the team has captured more than half a million bees and identified thousands of them down to the species.

“For me it was not a choice,” says Droege about his life’s work. “It was an operating way of life. I’m going to look at bees if you pay me or not. I go to weddings or funerals and I bring my [bee] net. I just enjoy it. And I really know in a much deeper way the animals. I know them intimately and that, to me, is really important.”

As one of the few experts intricately studying, identifying, and documenting bees in the United States, Droege receives samples of them from all over the country—Massachusetts, South Dakota's Badlands, and even the now-submerged Holland Island in Maryland. “This is it,” Droege gestures proudly around the open room to the hundreds of boxes lining the walls, the microscopes, computers, and papers spread across desks, and the half dozen young students documenting the bees. “There are very few people out there that can identify these bees.”

A Window Into Nature

As an animal that’s been around for more than 250 million years, bees have played a remarkable role, not just in our environment, but in our culture. Homer, Shakespeare, Yeats all spoke of the bee’s admirable work ethic and sweet nectar. Jars of honey have been found fully intact in ancient Egyptian tombs. Even the enzymes from bees’ honey were used as a soothing ointment on wounds during World War I. Spanish cave paintings dating back to 15,000 B.C. showed pictures of bees carved into rocks. These small but mighty creatures have fascinated humanity for eons.

Today the obsession continues. “I sit on the back deck, and they just hover over me,” says former CBF Virginia Field Specialist Robert Jennings who spends hours on his porch in Nelson County, admiring the pollinator extraordinaire. “I can hear their wings and they chase each other . . . . I actually remember, as a boy, petting a bumble bee. They’re pretty docile.” Jennings is fascinated by bees and has been teaching a course called Bees, Trees, and Clean Water for the past four years. In it, he discusses how bees are critical to pollinating almost every native plant out there, and how those plants are integral to reducing polluted runoff to our waters.

“Bees capture people’s imaginations,” says another bee enthusiast (and former teacher of Droege) CBF’s Clagett Farm Manager Michael Heller. “I can lie in front of the hive and watch them bring pollen in. And it’s just fascinating. You think, ‘wow, that’s skunk cabbage that’s blooming now or those pussy willows are blooming.’ By watching the bees come in and out, you get a feel for what’s going on in the world. They’re a little window on nature. And they’re critters that for some reason we just fall in love with.”

“The Little Things that Run the Natural World”

That’s what prominent naturalist E.O. Wilson said about insects—and for good reason. Bees, in particular, are integral to our environmental, agricultural, and economic systems. While honey bees and native bees differ (the European honey bees are colonizers and live together in a hive system while most natives are solitary and nest underground), they both have critical pollinating power.

When a bee collects nectar and pollen from the flower of a plant, some of the flower’s pollen sticks to the hairs of the bee’s body, which it then transfers to the next flower it visits and so on and so forth. When this happens, fertilization is possible. Think about that squash or tomato or eggplant on your plate—all are only made possible by bees.

As one would expect, native bees are far more important for pollinating native plants. And native plants, like cover crops clover and hairy vetch that build and promote healthy, carbon-sequestering soil, are key to a healthy Chesapeake landscape and Bay. “Native bees are really crucial for the native plants that we need for our Chesapeake landscape,” says another beekeeper and former CBF colleague Audrey Swanenberg, “for the rewilding aspect, for biodiversity, for everything else—for why we treasure this place.”

What’s more, about one in three mouthfuls of food we eat are delivered to us by pollinators—the majority of which are bees. The United Nations Environment Programme even estimates that between $235 billion and $577 billion worth of annual global food production is only made possible through direct contributions by pollinators. In Maryland alone, there are 460 different native species of bees—that we know of—and they are primarily responsible for pollinating roughly 75 percent of the state’s plants.

A World Without Bees?

“The bees are dying.” “The insect apocalypse is here.” “What is killing America’s bees?” It’s hard to avoid the alarming headlines of late. According to a study published in Biological Conservation, 40 percent of insect species, including bees, are undergoing “dramatic rates of decline” around the world and in just a few decades, 50 percent of insect species could be lost forever. Though some have questioned the science in this study, there is no doubt about it: Bees face overwhelming threats. Climate change, insecticide use, including the very harmful neonicotinoids, and, most importantly, habitat loss and degradation—all have devastating consequences for bees across the globe.

“The native populations are dropping,” says Heller, “and the native bees are magnitudes more important. They do so much more for pollinating and for farming . . . If native bees are having problems, that tells us we’re doing something to the environment that we have to be very careful about. They are an indicator of the health of the habitat.”

Droege shares a similar view: “Look at the entire world now and look how much of it has been paved. It’s happening.” A paved world means no habitat, no place for bees to grow and thrive. “If you replace woods or meadows with pavement . . . you’ve permanently disappeared that piece of land,” Droege continues. “Think about how the region is growing. [We’re] removing big chunks of land and making it into some kind of hardened landscape that has no value at all.”

When asked if he could imagine a world without bees, Droege is silent. And then, after a pause: “One could say 75 percent of the plants would disappear and different chunks of the environment would collapse. It’s sort of analogous to the problem of taking a coral reef and replacing it with what happens with an algae-based system. The corals die and then algae comes in, and what we would lose is this rich plant biodiversity—there would be something there but [it would be] just this kind of shadow [of what it once was].” It’s certainly not a world I would want to live in.

Still, Droege, ever the optimist, offers a final piece of hope: “Bees are tiny though, so they can hold on in pretty small areas. We can find most of the bees that were found 100 years ago in this region, and we’re gradually [adding more back to that] list.”

Take a look at our recent webinar on "Creating a Backyard Buffet for Birds, Bees, and Butterflies" for more helpful tips.