Blue Crabs: How are They Doing? 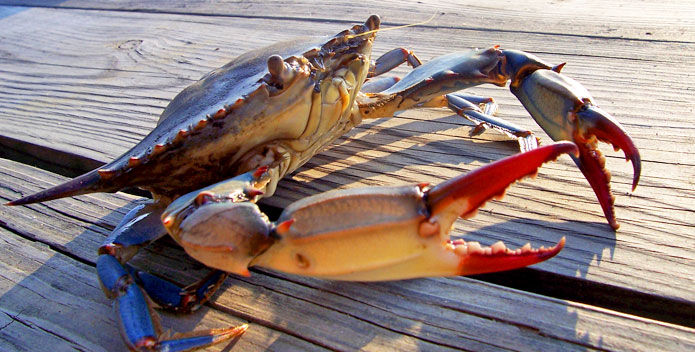 Long-term, blue crabs in the Chesapeake Bay are doing better than they were. But a record low number of juvenile crabs this year raises the need for caution. Chris Moore, CBF's Senior Regional Ecosystem Scientist, breaks down the numbers and what they mean.

Blue crabs are known as the "beautiful swimmer," and there are a number of positive effects of a healthy blue crab population.

First—and what is probably on the minds of most people living in the Bay watershed—is the benefit that there will be more crabs to catch and eat. Blue crabs support one of the Bay's most valuable commercial fisheries and a large recreational fishery.

From an ecosystem perspective, blue crabs of all sizes serve as forage (food) for a wide variety of fish, birds, and, yes, even other blue crabs (blue crabs are quite cannibalistic). Some of the more common Bay species that eat blue crabs include red drum, croaker, blue catfish and cobia. In fact, cobia are such voracious predators of blue crabs they are sometimes referred to as "crabeaters".

How do we measure the current status of blue crabs in the Bay?

Each winter, Maryland and Virginia partner on a winter dredge survey, which produces an estimate of the number of blue crabs in the Chesapeake Bay and its tributaries. The winter dredge survey is one of the most comprehensive surveys of any species in the Bay, dating back more than 30 years to 1990.

The survey is conducted by randomly sampling approximately 1,500 sites in the Bay and its tributaries with a depth of at least 5 feet. This work is usually completed from December through March when crabs are in semi-hibernation along the seabed. After the data are compiled and analyzed, the results are released around late April. Beginning in 1997, a comprehensive review of those results is completed annually by the Chesapeake Bay Stock Assessment Committee and released in early July.

The 2021 winter dredge survey showed a 30 percent decline in the total crab population, from an estimated 405 million to 282 million. The decline is primarily due to a steep drop in juvenile crabs to their lowest level since the survey began in 1990, though a reduced number of adult males also contributed. However, the number of adult females, the segment of the population we look at most closely to gauge the overall health of the population, increased from an estimated 141 million to 158 million, a number within the margins considered to be a healthy stock.

In the short-term, the 2021 dredge survey results aren't entirely outside the normal range of annual population fluctuations, but the extremely low estimate of juvenile crabs raises the need for caution.   Crab harvests are very dependent on the survival of young crabs from one year to the next, creating instability in the fishery.  The reduced abundance of juveniles and males could make crabs scarce later this summer and into the fall—impacting not only people who like to eat crabs, but also the commercial fishery.

Long-term, the blue crab population has been more robust since a science-based Bay-wide management plan was agreed to in 2008—a trend that tells us the blue crab population will respond positively to science-based management actions. One of the best indicators of this increased abundance has been the fact that numbers have surpassed the target abundance for adult female blue crabs twice since 2008, after exceeding it just once between 1990 and 2008.

The blue crab population fluctuates annually based on a variety of factors, including weather, predation, and harvest. We can help blue crabs on two fronts: continuing wise, science-based management and doing all we can to reduce pollution.

On the management side, the extremely low estimate of the juvenile population in 2021 highlights the need to continue to protect spawning females and to consider precautionary measures to protect juveniles so they can grow to maturity and spawn.

Reducing pollution to improve water quality and habitat, as outlined in the Chesapeake Clean Water Blueprint, is also critical for blue crab survival. Underwater grasses represent one of the most important habitats for young and female crabs, providing food and protection. The Bay's grass beds are vulnerable to pollution that decreases water clarity and blocks sunlight, as well as rising water temperatures and high flows of water from extreme storms linked to climate change. Crabs are also affected by the Bay's "dead zones"—areas of little or no oxygen that rob blue crabs of both food sources and areas to hide from predators.