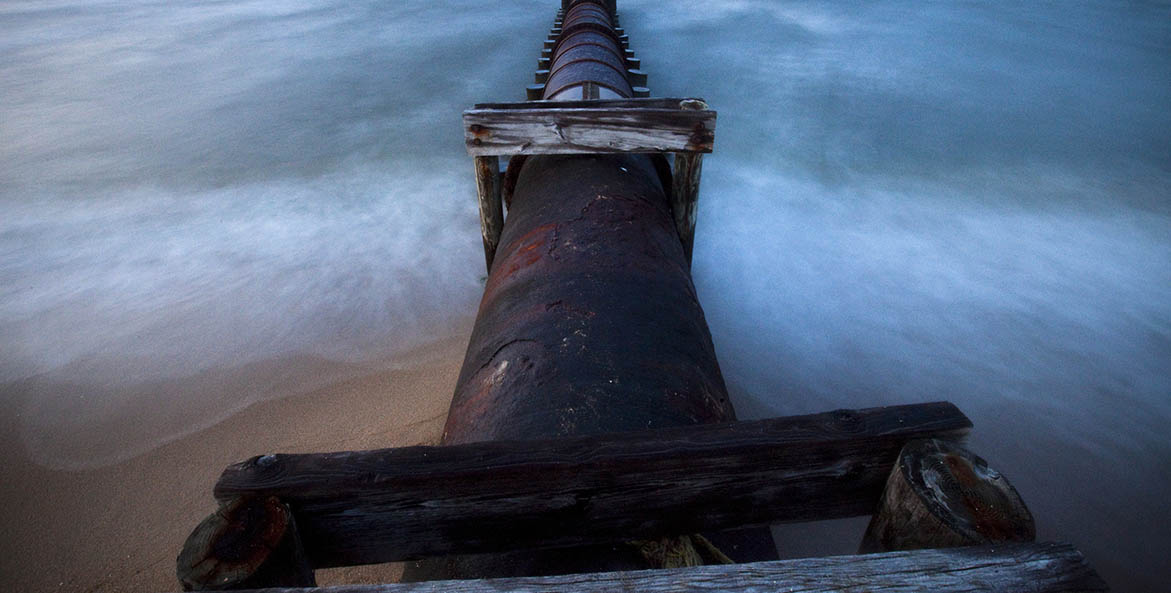 Waves break against the opening of a storm drain that runs from the Ocean View beachfront directly into the Chesapeake Bay in Norfolk, Virginia.

Virginia has a big opportunity

The following was first published in the Virginia Mercury.

The August special legislative session brings Virginia the greatest opportunity in years to invest in infrastructure that will restore the environment, improve public health and create green jobs. Legislators will determine how Virginia will use approximately $4.3 billion in federal funds from the American Rescue Plan. Conservation groups across the commonwealth urge legislators to invest just a fraction of that money in clean water infrastructure projects that will create vast long-lasting benefits.

Richmond, Alexandria and Lynchburg have long been grappling with outdated combined sewer systems. An unfortunate legacy of the 19th century, these systems are designed to mix raw sewage and stormwater in times of heavy rainfall and send the overflow—millions of gallons of untreated human sewage—into the James and Potomac rivers. This overflow pollutes rivers with nitrogen and phosphorus as well as bacteria including E. Coli, creating health threats for swimmers, paddlers and others who spend time on the river.

All three cities are making steady progress towards modernizing their combined sewer systems. They have detailed plans to finish the job, but the work is hard and expensive. Gov. Ralph Northam's support of a $125 million investment in this work is an important step forward, but more remains to be done.

Without additional federal and state funds, lower-income residents could face challengingly higher sewer bills. That burden could be substantially alleviated by a total appropriation of $250 million in federal funds to combined sewer system upgrades in these cities, particularly if allocated based on each city's scope of work and the financial needs of each community. This step would also eliminate a public health risk and support new jobs.

In rural areas, homeowners not connected to public wastewater treatment rely on septic systems. When they get old, failing septic systems back up toilets, create stinky soggy patches in the yard and leak sewage into the environment. This increases bacteria in waterways, making it dangerous to swim or local eat oysters and other seafood.

Fixing a septic system can cost thousands of dollars, well beyond the financial reach of many families. Gov. Northam has committed to using federal dollars to begin addressing this problem. We believe a $100 million investment of federally provided funds would help thousands of families take care of this health hazard, clean up waterways and even boost local businesses that install septic systems.

We don't often think of trees as infrastructure, but they play an outsized role in Virginia neighborhoods. Consider how on a hot August day just one tree can provide a cooling oasis of shade. Research shows that in Richmond and other cities, neighborhoods with fewer trees can be more than a dozen degrees hotter than tree-covered areas. These hot spots are often the legacy of disinvestment due to redlining, a now-outlawed practice that denied loans to predominantly Black neighborhoods. The resulting extreme heat can be dangerous for residents, leading to ambulance calls and even death.

As extremely hot days increase due to climate change, Virginia is losing about 56,000 acres of trees annually, according to current estimates, just within the Chesapeake Bay watershed. Increasing and expanding tree cover can help cool neighborhoods while adding green space for neighborhood enjoyment. Trees reduce polluted runoff to waterways and help address local flooding. Investing $50 million in the Department of Forestry's Urban and Community Forestry Program would make a huge difference for neighborhoods while supporting local jobs in planting, mulching and maintaining trees.

The availability of federal funding has also created an opportunity to upgrade the infrastructure needed to meet Virginia's longstanding commitments for Chesapeake Bay restoration by 2025. Legislation passed earlier this year requires many Virginia wastewater treatment plants to make upgrades to significantly reduce the pollution they discharge into rivers. Gov. Northam has indicated his support for substantial funding for this work. We urge an additional $200 million in federal funding to help plants complete these projects.

Cities and counties are also hard at work updating stormwater infrastructure to alleviate flooding and keep polluted runoff out of local rivers, streams, and the Chesapeake Bay. While Virginia's Stormwater Local Assistance Fund provides grants, funding has always fallen far below what is needed. An additional $80 million investment in the program would help localities accelerate this work to protect local streams and push Virginia forward to meet Bay restoration goals.

With unprecedented federal funding coming to Virginia, legislators have an historic opportunity as they meet this August under the leadership of Speaker of the House Eileen Filler-Corn, Senate President Justin Fairfax and President pro tempore Louise Lucas as well as House Appropriations Chair Luke Torian and Senator Finance Chair Janet Howell. We urge them to seize this opportunity to make progress on serious, often-neglected infrastructure needs for the environment and the health and well-being of residents.