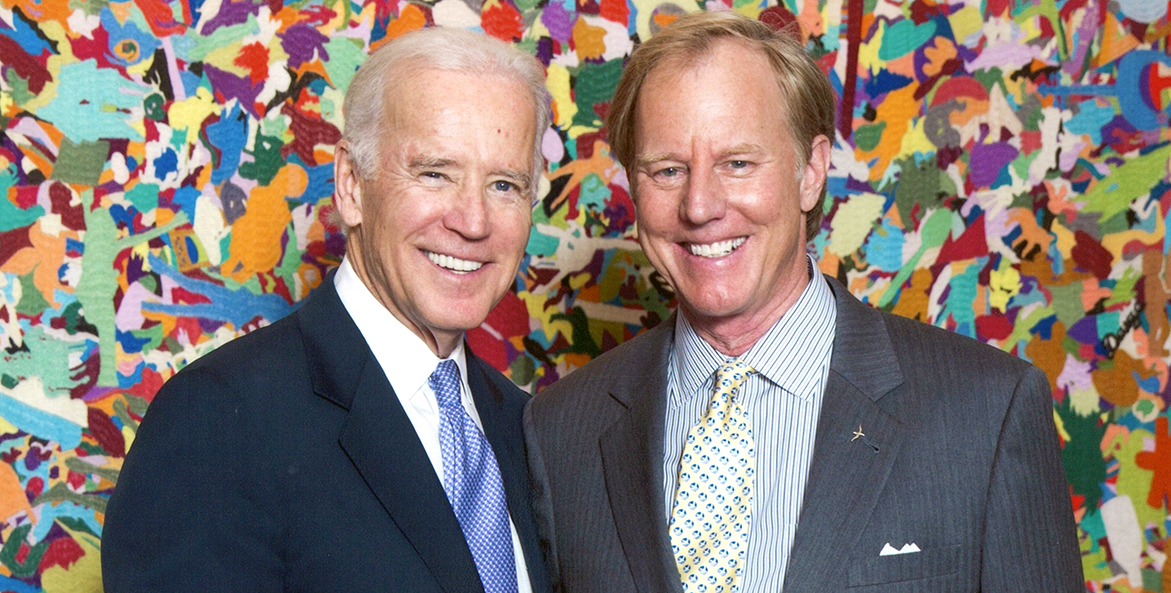 CBF President Will Baker with then Vice President Joe Biden at an event in Baltimore.

If the heady years of the 1980s delivered a robust scientific roadmap to Bay restoration, it was a legal victory in 2009 that at last committed the federal and state governments to its implementation. In a settlement with CBF and its partners, the U.S. Environmental Protection Agency agreed to establish legally enforceable limits on Bay pollution. All six states that share the watershed, and the District of Columbia, agreed to create plans that meet those limits and implement them by 2025.

This landmark agreement, the Chesapeake Clean Water Blueprint, followed more than two decades of failed, voluntary Bay Agreements between the states and EPA. Progress is real despite enormous pressure from population growth, climate change, and other challenges. Pollution is declining, and the low-oxygen dead zone in the Bay is shrinking over time. Yet even now, the road to restoration remains a steep, deeply pitted, and often winding one.

"During Will's time at CBF, the watershed population grew by half, and pollutant loads were cut by a quarter," says Ann Swanson, Executive Director of the Chesapeake Bay Commission. "But the pollutant loads must be cut by half. So big challenges remain and CBF must press hard to stay the course."

Baker is still pushing. Much of the pollution reductions to date occurred at so-called "point sources" like wastewater treatment plants, after efforts by CBF and partners successfully advocated for funding technology upgrades and more stringent permits to curb pollution flowing out of pipes. Now, the focus is on the essential task of reducing "nonpoint" pollution flowing off the land in the form of fertilizers and manure—much of it from Pennsylvania—by mobilizing resources for farmers to install conservation practices. But the "spot on the wall" remains the same: reducing pollution to levels that science says will support a healthy, functioning Bay ecosystem.

"There's an unrelenting fashion and commitment to what he's trying to do," says Donald Boesch, Professor and President Emeritus of the University of Maryland Center for Environmental Science and a member of CBF's Board of Trustees. "People may offer criticism of his style, but I don't think anyone seriously questions his targeted pursuit of the goal. He wants to get this done. It's a deep, deep feeling that he has."

The feeling is infectious. To hear Baker speak about the Bay and the need for its restoration is mesmerizing, says Jeff Benoit, former President and CEO of the national conservation organization Restore America's Estuaries (RAE). Baker was among the founding members of RAE in 1995, which has since brought together an alliance of 10 major coastal conservation groups to conduct and advocate for coastal habitat restoration.

"Really from the get-go he was part of creating the vision of providing unity among these organizations that were all trying to do the same thing, and leveraging their ability at the national level to do even more than all of the great things they were doing individually," Benoit says. "It was the catalyst behind the estuary habitat restoration movement across the U.S. That's a remarkable legacy that he helped create."

Partnerships remain a priority Baker champions at CBF. The Making History Campaign, launched in 2018, is entirely focused on mobilizing broad partnerships to multiply and accelerate efforts to reach the Blueprint's 2025 pollution reduction targets. Its ambitious goals include adding 10 billion oysters to the Bay to act as natural filters for the water; planting 10 million trees in Pennsylvania in priority areas that buffer pollution before it reaches streams; and raising one million voices to advocate for funding and policy priorities necessary to meet the Blueprint targets.

Baker has always had a unique ability to connect with donors and members because he is one himself. Ever since his first days with CBF, Baker has given generously to what has become his life's work. He has also inspired extraordinary giving from his friends and family. These personal investments helped kickstart and strengthen CBF's restoration, environmental education, and advocacy. The impact of his decades of generosity and partnership-building was never more evident than this fall, when donors surprised Baker by contributing over $3 million to sustain CBF's work through the newly created William C. Baker Building a Better Future Fund.

To this day, as he has for the past 45 years, Baker works tirelessly for Bay restoration, says Truman Semans, the board member who first recruited him to the Bay's cause. From the moment he climbed down from the tree, Baker changed the future of the Chesapeake Bay and the lives of so many who depend on and care for it.

"The facts are that he's mentored me and taught me more about the Bay, and what its needs are and what its challenges are, than I have him. And I think we've been so fortunate to have him," said Semans.