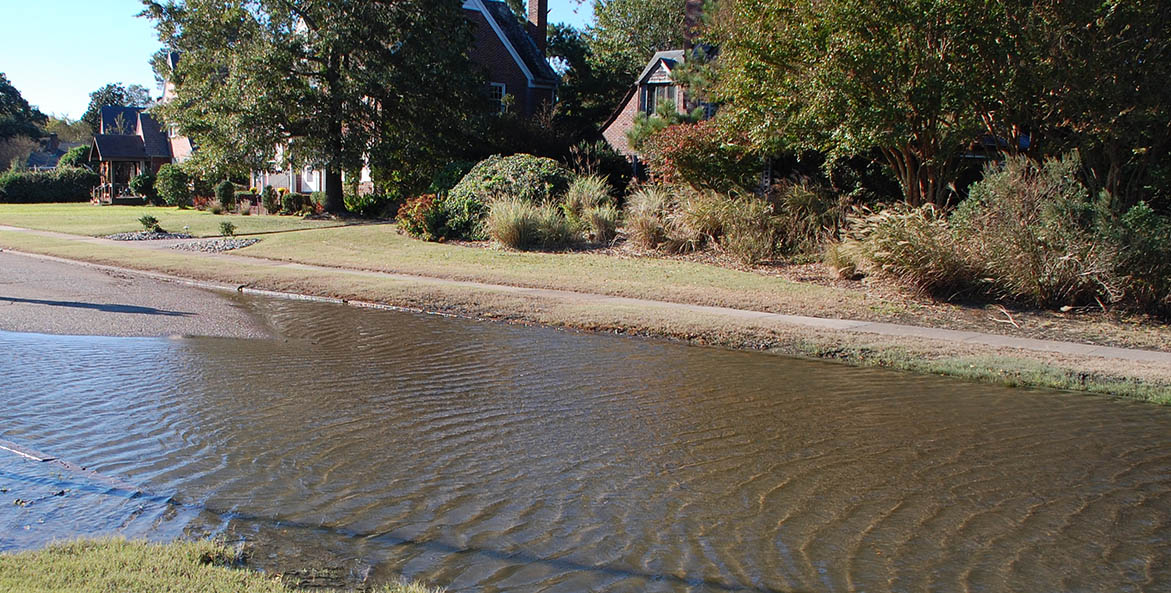 The following was first published in The Virginian-Pilot and the Daily Press.

Those are also at the top of our list. Healthy waterways are part of this region's way of life, and crucial for the tourism and seafood industries.

But these same waters can also pose a threat. Local kids miss school when streets are too flooded for the bus, small businesses and homeowners repeatedly foot the bill for water damage, and heavy rains and high tides cause traffic nightmares.

Fortunately, there is an efficient way to both prevent flooding and reduce pollution to waterways: strong investment in nature-based resiliency projects.

Virginia has spent decades without dedicated state support for this work. All that changed last year, when Virginia financed the Community Flood Preparedness Fund with revenue from participation in the Regional Greenhouse Gas Initiative (RGGI).

In the first year, Virginia secured about $100 million that is now kick-starting projects to control flooding across Hampton Roads and Virginia. The fund will support projects similar to a federally funded effort now under construction in Norfolk's Granby Village and Chesterfield Heights communities, where high water has long blocked roads, eroded shorelines and isolated neighborhoods.

The work underway is using different approaches to address these problems, including living shorelines, oyster reefs and water-absorbing pavement. A new Resilience Park will provide a tree-lined space with sports fields and community gathering spots, as well as restored wetlands and a tidal creek.

Full disclosure: One of us runs MEB, the Chesapeake-based construction firm managing this project, while the other has long worked in environmental protection in Hampton Roads. Together, we can attest that resiliency projects support local jobs and create long-term benefits for the economy and health of the Chesapeake Bay.

Long-term solutions to flooding can capitalize on natural processes. Think of how a marsh, wetland or forest soaks up rainwater unlike concrete or asphalt. Natural solutions include creating living shorelines of marsh grasses rather than using hardened riprap, rebuilding wetlands rather than filling them in, and planting trees along roadways.

By absorbing rainfall, these features prevent rains from washing pollution into waterways. They also create habitat for coastal wildlife, from blue crabs to blue herons.

There are also big economic benefits from nature-based resiliency projects protecting homes and businesses. Research shows that salt marshes can reduce annual flood losses for homeowners by more than 20%. Coastal wetlands have prevented hundreds of millions of dollars of damage from a single storm.

RGGI provides a dedicated revenue stream to support these efforts in Virginia. This market-based program creates an economic disincentive for power plants that emit greenhouse gases contributing to climate change. These emissions also add to air pollution, which contributes about one-third of the nitrogen pollution that reaches the Chesapeake Bay.

Nearly half of the revenue from RGGI goes to Virginia's flood fund, which prioritizes nature-based projects. The other half is dedicated to upgrading energy efficiency in the homes of Virginia families who couldn't otherwise afford it. This smart allocation supports measures like replacing HVAC systems or sealing air leaks, which ultimately save Virginians money on utility bills.

Having a dedicated funding source is key. In 2016, legislators who wisely set up a Virginia fund for coastal resiliency ran into a problem: The program went years without any investment from the state. Ending Virginia's participation in RGGI would mean funding for resiliency work would have to compete against countless other priorities.

Youngkin and other elected leaders can focus on protecting us from flooding, ending pollution to waterways, and creating jobs through reliable investment in resiliency projects using nature-based solutions. Virginia should stay in RGGI. We simply cannot afford to press reset on funding flood protection. Our economy, well-being, and quality of life depend on it.