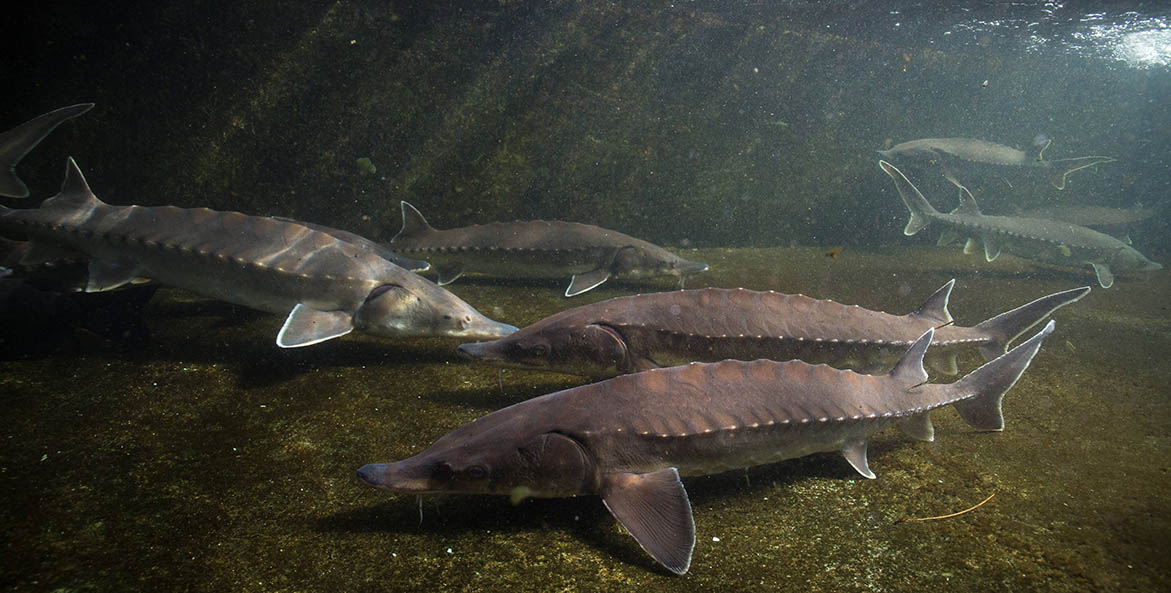 Atlantic sturgeon (Acipenser oxyrhynchus) require a clean bottom substrate, free of sedimentation, for the successful development of their eggs.

Captain Ken Slayzk felt a rush of excitement as he pulled a net into the CBF education boat. Inside was something he hadn't seen before on Virginia's James River.

"We noticed a fish that was only about six inches long, and it was just different," Slayzk recalls about the 2004 trip. "At that point, scientists didn't even know if there was a population of sturgeon spawning on the James River. Seeing a six-inch sturgeon indicated that was true—they were spawning."

It was a breakthrough moment in the Chesapeake Bay watershed. Just five years earlier, nearly every fisheries scientist in the region believed Atlantic sturgeon were locally extinct in the Bay. The species, which can grow to more than 10 feet long and over 700 pounds, had been overfished for their caviar during the early 1900s causing the population to plummet. In the years after, pollution and habitat loss were thought to have killed those that survived. In 1998, to protect those that remained, the Atlantic States Marine Fisheries Commission established a coast-wide moratorium on harvesting the fish.

But Slayzk's catch proved sturgeon weren't just visiting the James, they were reproducing.

Matt Balazik, a fisheries biologist with Virginia Commonwealth University, who studies the James River sturgeon population, said the juvenile discovery enabled scientists to access funding for more in-depth research. In 2012, Atlantic sturgeon were formally listed as an endangered species in the Chesapeake Bay.

Today, scientists are able to better catch, track, and tag sturgeon. Researchers have now studied more than 1,000 fish during the sturgeon's fall spawning season in the James.

Secor says he has yet to catch a juvenile in the Maryland river system, but the presence of adult sturgeon in the rivers and the Bay underscores their resilience. The species is prehistoric. The fossil record indicates types of sturgeon were present more than 240 million years ago.

"We now know they're in the James, York, Rappahannock, Nanticoke, Potomac, and elsewhere," Secor said. "What a great thing that we still live in Jurassic Park."

Sturgeon scientists have several theories about why sturgeons are being found more often in the region. One prevalent theory is that we're tracking them better. The second is tied to improving environmental conditions.

For the previous decade, Bay watershed states have been working together to reduce sediment and other types of Bay pollutants under the Chesapeake Clean Water Blueprint.

This is important for sturgeon. Sturgeon lay adhesive eggs in clean water on gravel bottom. Too much sediment prevents sturgeon eggs from sticking.

Another threat to sturgeon is blue catfish, an invasive species introduced in the James River in the 1970s as a sport fish. The species has since proliferated throughout the Bay.

"I don't know how you get that genie back in the bottle," Secor said about the spread of blue catfish. Doug Myers, CBF's Maryland Senior Scientist, urges recreational anglers to target blue catfish and kill them if caught.

Sturgeon fans like James Riverkeeper Jamie Brunkow remain optimistic about the future of Atlantic sturgeon in the Bay. "They've become a mascot for us in a lot of ways. We're seeing a noticeable improvement in water quality and for a fish like this one to come back at the same time, it's great."

The comeback of Atlantic sturgeon in the Bay is fragile.