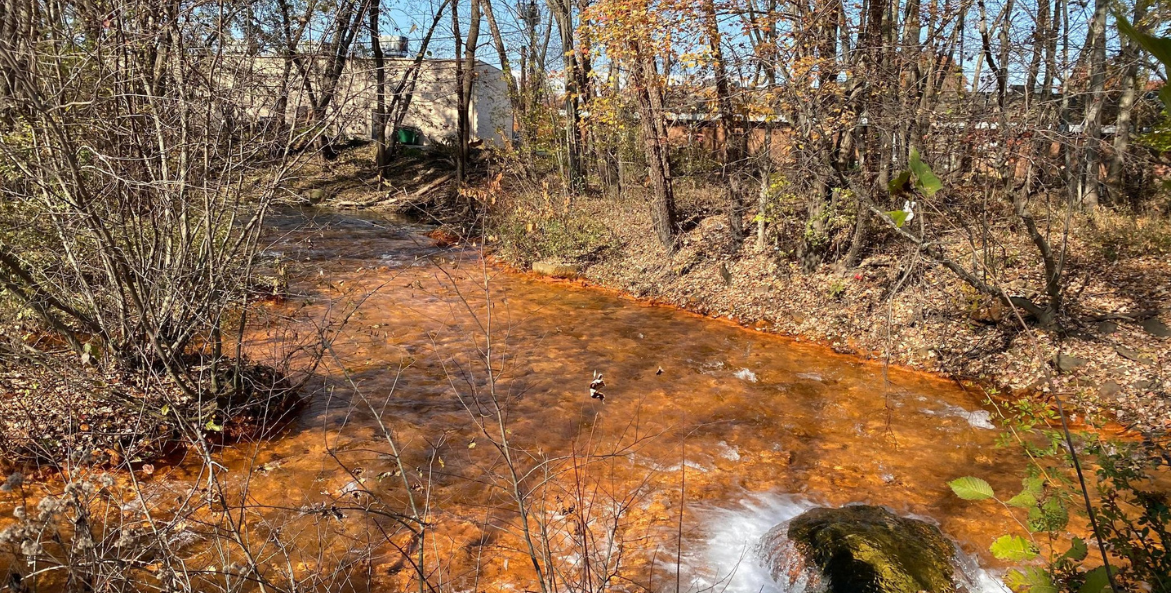 Acid mine drainage is water that flows through abandoned coal mines, interacts with rocks inside the mines, and then flows out through seeps, tunnels, and drilled holes. In local waterways, the streambeds are stained a rusty orange from the excessive iron deposits in the water.

The legacy of coal mining is a key source of harm to Pennsylvania’s headwaters.

As it ambles southward out of Cambria County toward Altoona, the headwaters of Kittanning Run are like other coldwater fisheries in Pennsylvania. The stream is clear and supports diverse aquatic life.

But less than a mile downstream and within the Allegheny mountains of Blair County, the Kittanning turns ugly.

Here, the legacy of coal mining, which dates back in Pennsylvania to the 1700s, is still visible today. Acid mine drainage (AMD), highly acidic groundwater that carries toxic heavy metals, flows out of the mountainside and into the stream. For the next five miles, the lifeless Kittanning runs over a bed of bright, rusty orange.

AMD is a major source of pollution across the Commonwealth.  The Department of Environmental Protection’s (DEP) latest report on impaired waters indicates that 7,356 miles—up from 5,500 miles in 2020—are impaired from AMD. It impacts an estimated 1,305 stream miles in Pennsylvania’s portion of the Chesapeake Bay watershed.

Mine discharges and acidic runoff from coal refuse piles, unreclaimed abandoned mine lands, and abandoned silt basins that are not actively mined are the main causes of such damage. 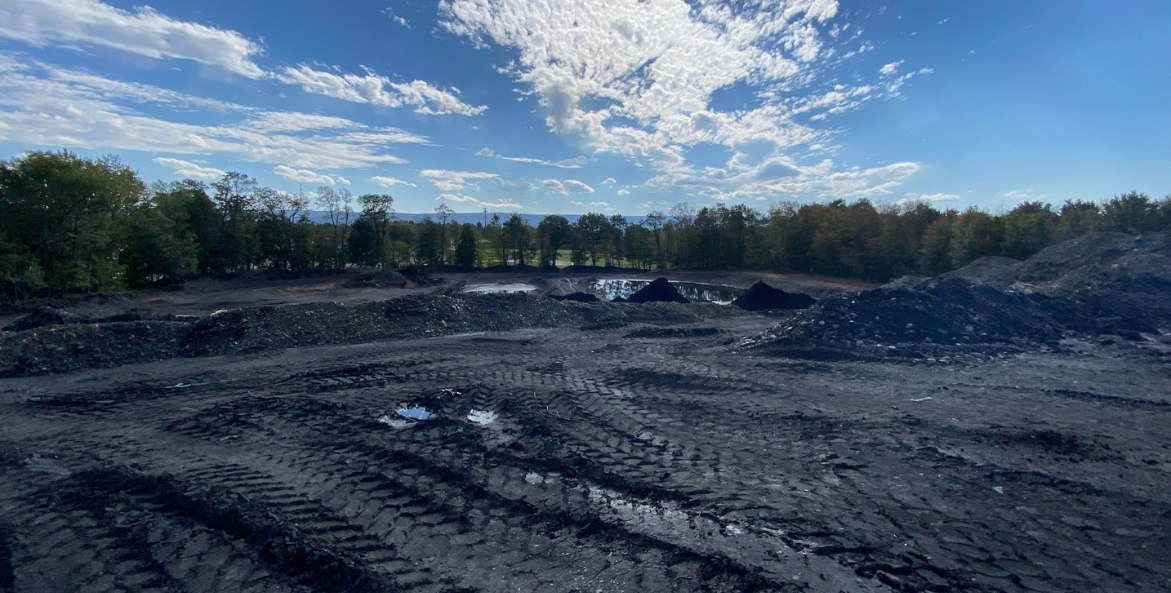 Mine discharges and acidic runoff from coal refuse piles, unreclaimed abandoned mine lands, and abandoned silt basins that are not actively mined are the main causes of this toxic brew.

What is Acid Mine Drainage?

AMD is water that flows through abandoned coal mines, interacts with rocks inside the mines, and then flows out through seeps, tunnels, and drilled holes.

The scale for pH levels is 0-14. It is a measure of how acidic a basic liquid is. The average pH level of fresh water is 7, which is neutral, neither acidic nor basic. Fish can survive in the 6-8 range. AMD can have a pH as acidic as 2. To put it in perspective, DEP says AMD is 100,000 times more acidic than neutral water.

In Kittanning Run, AMD is laden with toxic metals, including iron, aluminum, and manganese. The pH level of its water, on its best day, is a 2 or low 3. The rusty orange of the streambed is iron dropping out of the water and staining the streambed.

“You can walk in it and not even slip,” Katie Semelsberger says of the Kittanning. “There is nothing that grows in it.”

Semelsberger is Land Manager of the Altoona Water Authority (AWA), which purchased 2,459 acres from Cooney Brothers Coal in August of 2020. Half of the funding came from the state Department of Conservation & Natural Resources. AWA acquired the Kittanning and the property as resiliency against drought.

“We have suffered drought events in the past and we supply lots of people. It can be nerve-wracking in the summer when you see the reservoirs get so low. There is a lot of flow coming off of that mountain,” Semelsberger says.

Kittanning Run has been diverted around the AWA water supply and joins Glenwhite Run, and the two become Burgoon Run. The total length of impaired waters is 12 miles.

The DEP is funding reclamation of abandoned mine land that is now AWA property, backfilling and replanting dramatic, mountainous slopes after taking out a dangerous high wall left by mining. The agency completed another land reclamation project there when Cooney Brothers Coal still owned it.

Reclamation of the property includes planting about 180,000 trees, some of those supplied by the Keystone 10 Million Trees Partnership, coordinated by CBF. The partnership has planted trees on other abandoned mine lands near the Flight 93 National Memorial in Somerset County, and Moshannon State Forest.

“We also didn’t want to see anything else happen that would impact the watershed even more,” Semelsberger adds. “We consider ourselves stewards of our watershed and we want to take care of it. Part of the reason DEP is doing the reclamation is to stop a lot of the runoff and erosion that would go into the stream.” 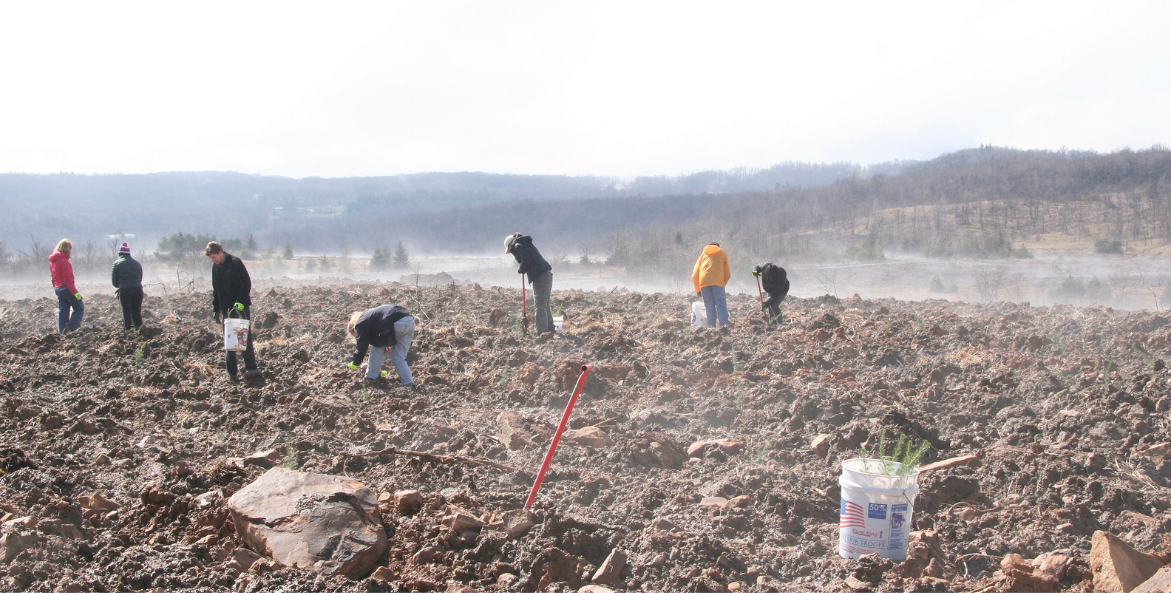 Reclamation of the property includes planting about 180,000 trees, some of those supplied by the Keystone 10 Million Trees Partnership, coordinated by CBF. Students from Bryn Mawr College are helping with the effort.

A Widespread Problem for Pennsylvania Waters

Bobby Hughes, Executive Director of the Eastern Pennsylvania Coalition for Abandoned Mine Reclamation (EPCAMR), says of the Commonwealth’s 67 counties, past mining impacts 43.

The Western Pennsylvania Coalition for Abandoned Mine Reclamation was created before the EPCAMR and has a similar focus and mission.

EPCAMR supports the reclamation and cleanup of abandoned mine land and any waterways that are polluted from mines that were abandoned before enactment of the Surface Mining Reclamation Act of 1977.

Prior to the Act, mine operators were not as heavily regulated by law to mitigate the negative effects of their operations on the land and to the water.

“We have documented 5,000-plus discharges,” Hughes says. He adds that there could be thousands more that are unaccounted for until local citizens inform the state of their locations, which places them into the abandoned mine land inventory system.

“I don’t know if many other states have done such a comprehensive inventory of AMD. Some states don’t know where all of their discharges are,” Hughes says.

“What we are trying to do is get a handle not only on their location, but whose property they fall on, what kind of flow there is coming from them, and the type of chemistry the AMD has,” he says.

“Once we have that information, we can make much more informed decisions about the type of passive or active treatment system options and costs to treat, operate, and maintain the systems chosen.” 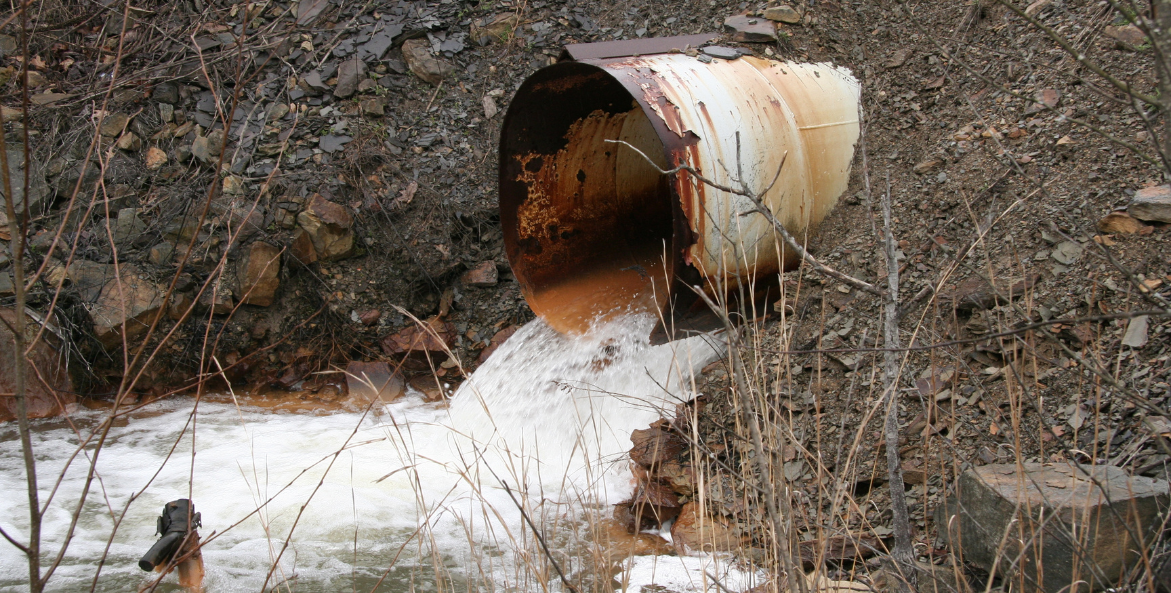 In Kittanning Run, AMD is laden with toxic metals, including iron, aluminum, and manganese.

Documenting the diversity and severity of so many AMD discharges, with sustained support, helps devise treatments.

“Most AMD discharges do not stop flowing,” Hughes says. “Some of them could be tens of thousands of gallons per minute,” Hughes says. “That is a significant amount of water that could be treated and have the potential for reuse. If we don’t know flow or chemistry, you don’t know how to size a plant, how much land will be needed, or if active treatment is needed. Those are going to be different based on every discharge.”

An example is the sampling of Kittanning Run under way now.

The AWA received a three-year Growing Greener grant from the DEP to conduct sampling  to create a baseline, determine the best method for cleaning the stream, and apply for more grants.

The basic goal of treatment is to raise the pH level of impaired waters and to remove metals.

DEP says that active treatment systems require equipment, maintenance, and addition of chemicals to the water. Passive systems for smaller discharges may use chemicals as well as a biological element, such as routing water over limestone channels to a constructed wetland designed to buffer and precipitate metals found in the mine water.

The funding challenge for treating AMD received a boost last November when the bipartisan federal infrastructure bill passed and secured $11.3 billion in new funding to tackle abandoned mine lands nationwide.

Pennsylvania is estimated to receive nearly $4 billion over the next 15 years to address contamination and pollution caused by its coal mining legacy. The Commonwealth’s annual funding could be around $250 million. According to the DEP, funds earmarked for Pennsylvania represent the biggest sustained investment in cleanup and reclamation of abandoned mine lands ever.

On March 30, U.S. Senators Bob Casey (D-Pa.) and Mike Braun (R-Ind.) introduced the Safeguarding Treatment for the Restoration of Ecosystems from Abandoned Mines (STREAM) Act with U.S. Representatives Matt Cartwright (D-Pa.) and David McKinley (R-W.Va). The Act would set aside up to 30 percent of a state’s abandoned mine land funding to treat AMD for use over a longer period of time.

“Building and installing AMD treatment systems without securing the long-term financing and funding to keep them running doesn’t make sense,” Hughes says. “We need a long-term solution that keeps the systems running, so our children and grandchildren can have clean water that we did not. The STREAM Act could create sustainable jobs and investments and put people to work in our often-underserved communities.”

Back in Blair County, Kittanning Run isn’t the only stream to suffer from AMD, but it’s the only one still impaired by it. Six passive AMD treatments using a series of ponds, limestone channels, and aeration cleaned up Glenwhite Run.

Like the Kittanning is now, the Glenwhite was once uninhabitable. It  now supports trout and provides clean water to AWA customers.