When the Student Becomes the Teacher 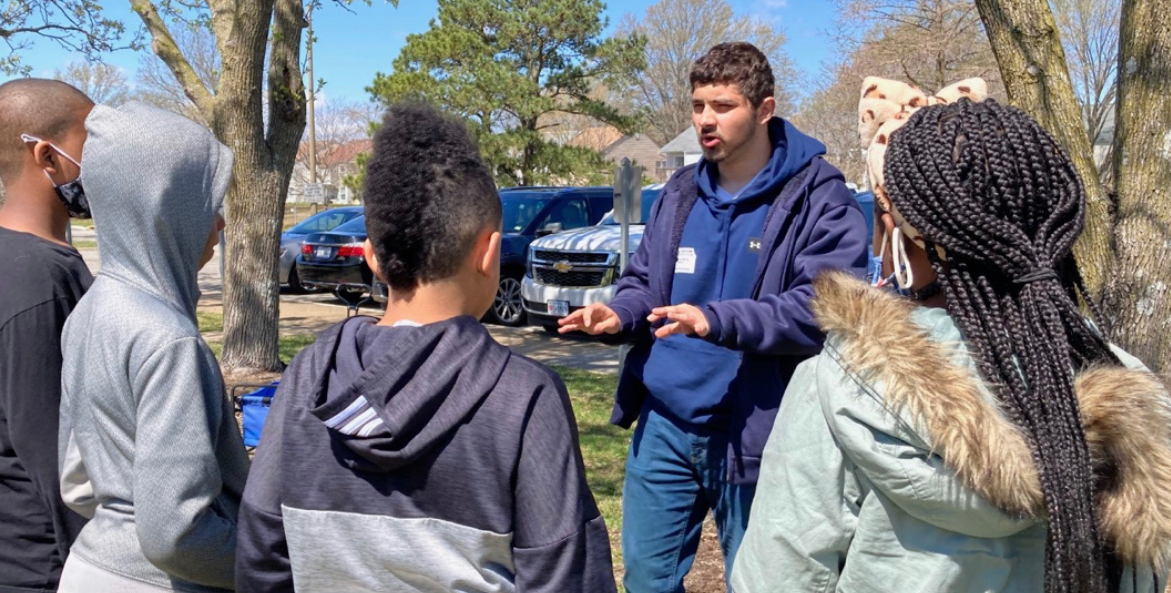 As CBF holds a celebration today marking the success of the Macon and Joan Brock Classroom, this is just one example of the many amazing ways our partnership with Virginia Beach City Public Schools is building the next generation of environmental leaders.

What happens when the student becomes the teacher? They just might go on to inspire elementary school students through environmental education, as high schoolers in the Virginia Beach City Public Schools (VBCPS) Environmental Studies Program did this spring.

“It was probably one of the greatest experiences I've ever had. I definitely did not go into it thinking it would impact me as much as it did,” said Adriana Yeiter, a student in the VBCPS program, which meets daily at CBF’s Macon and Joan Brock Classroom at the Brock Environmental Center in Virginia Beach. “It was so amazing growing bonds with the students as well as seeing them engaged and happy to learn about their environment in an outside setting.”

The unique opportunity is part of an innovative partnership between the public school system and CBF, in which juniors and seniors learn daily at the Macon and Joan Brock Classroom. They’re excelling through hands-on experiences, from restoring oysters in the Lynnhaven River to conducting field research on what the nearby forest tells us about climate change. This bond forged between CBF and Virginia Beach schools is inspiring the next generation of problem solvers while helping diversify the face of the environmental movement.

This spring the high schoolers broke more new ground by creating and teaching environmental education lessons in schoolyards to other students at six local elementary schools.

Experts from CBF and VBCPS worked together to prepare the high school students to develop and lead Meaningful Watershed Educational Experiences. While for decades CBF has trained teachers at schools across the region in environmental education, this was the first time CBF helped train students to teach other students.

“The high schoolers in the Brock Classroom are simply amazing. We treated them exactly the same as we treat teachers when we give environmental education trainings, and they got it right away,” said Cindy Duncan, CBF’s Virginia Professional Learning Coordinator. “By bringing these concepts to elementary schools, the students have become ambassadors for environmental education.”

The high school students developed and taught hands-on lessons to fifth graders, including identifying native plants and exploring photosynthesis and the parts of a plant.

Devin Castano
“We can't even begin to explain the connections we felt to these kids. They were all so engaged and interested in what a group of seniors had to say. They loved learning outside and I think it truly showed them learning can be fun.  … . It was liking teaching younger versions of ourselves to be the change the world needs.”

Jack Whelan-Gibbs
“Seeing the student's faces light up with excitement and inquiry after telling them plant roots have hairs on them was worth every struggle and problem during the planning of this. … “After each lesson, students would come up to my group and be begging for us to stay longer. Not only were the kids enjoying being able to apply their learnings outdoors, but they were also quite inquisitive, wanting to know as much as they could about their watershed and local environment.”

Latanya Hopkins
“At first, I was afraid of speaking to the children or speaking to anyone, but the kids helped me open up and be myself around them. As the internship continued, I felt amazing sharing realistic facts and details about the environment!”

Ava Mariano
“Teaching young students about the environment in an engaging and fun way was extremely rewarding and one of my proudest accomplishments.”