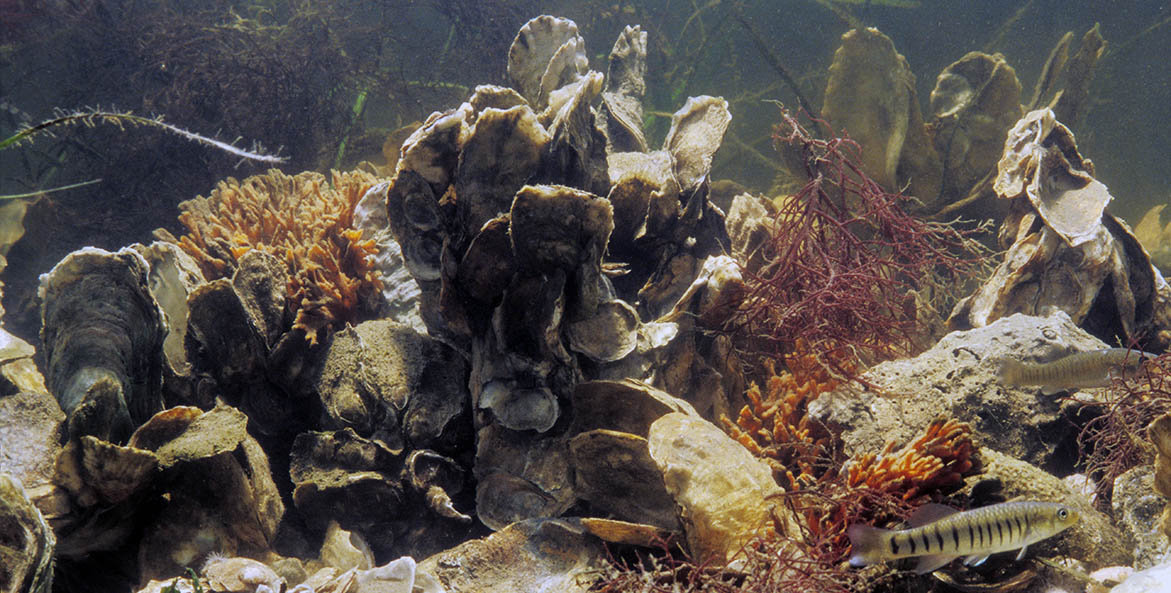 Oysters like things a little salty. So, what happens when the Bay gets fresh?

While investigating a series of "lumps" in the Potomac River last year, researchers uncovered a mystery. The underwater hills on the river bottom contained perhaps hundreds of thousands of bushels of old oyster shells. But how did they get there?

Oysters, like most marine animals, require a certain amount of saltiness in the water, a measure known as salinity. Estuaries like the Chesapeake Bay are formed where fresh water from rivers meets salty water from the ocean. As a result, salinity varies greatly throughout the Bay by location and season, with fresher water generally found in the upper reaches of the Bay and saltier water near its mouth.

"One thing we know about all critters that live in estuaries is that they are typically more tolerant of different salinity conditions," says Allison Colden, Maryland Senior Fisheries Scientist at CBF. "That's why you can find the same species of oyster that's in the Chesapeake Bay all the way from Canada down to Venezuela."

Still, oysters need a salinity of at least five parts per thousand in order to survive. That's why the lumps in the Potomac River are so perplexing. They're too far upstream, in a place where the water is too fresh, for oysters to live. Or perhaps at one time that wasn't the case. Other relic reefs have been found in in the upper Chesapeake Bay, too.

"Ancient oyster reefs can give us a glimpse of how climate has changed over the centuries," says Jackie Shannon, CBF's Virginia Oyster Restoration Manager. "We can see how and where oyster reefs have retreated or expanded in response to sea level and climate. We obviously can't test the water to see how salty it used to be, but ancient reef locations capture a moment in time where conditions have changed to support or inhibit oyster production."

So, what changed, and where did all the oysters go? Part of the story is the precipitous decline in the Bay's oyster population at large. Pollution, overfishing, and disease have left present-day oyster populations at just a fraction of their historic size. As sediment flowed off the land, it buried many of the reefs, turning them into the underwater 'lumps.' But the same changes to the watershed's landscape that led to excessive levels of pollution and sediment in the Bay may also have played a role in another change: salinity.

"I think the sheer amount of fresh water that's entering the Bay is a lot different than in the past because of the differences in land use," Colden says. "We've removed a tremendous amount of forested land. We've lost the majority of our natural filters—the natural infrastructure—that could capture that fresh water along the coast before it hit the Bay."

In a time with more forests and wetlands to soak in the fresh water, it's possible that conditions in the Potomac River were once much saltier, and friendlier to oysters, than they are now. And even if they weren't salty enough for oysters to successfully reproduce, it's also possible that productive reefs in other, saltier areas of the Bay were able to replenish the reefs in the upstream portions of the Potomac.

When oysters reproduce, the adults on the reef release sperm and eggs into the water, where they create larvae. The baby oysters are then largely at the mercy of wind and currents, until they settle down and attach to hard surfaces—usually other oyster shells and reefs—to grow.

"It could end up several miles away in a fresher body of water," says Karl Willey, CBF's Maryland Oyster Restoration Program Manager. "In the Potomac, the oysters could have been spawned in higher salinity and the currents could have rushed them all the way up and gotten into the upper reaches of the river."

Oyster restoration efforts in Maryland and Virginia, of which CBF is a part, are hoping a similar process will help reestablish reefs and rebuild the Bay's oyster population. Restored reefs, like those in Harris Creek on Maryland's Eastern Shore, could one day act as sources of baby oysters to replenish and build other reefs, Willey says. By the end of this year, large-scale restoration of reefs will be complete in nine out of 11 tributary rivers selected by the two states, and the remaining projects are on track to be completed by 2025. These oyster reefs are critical to filtering and cleaning our water as well as to providing vital habitat for fish, blue crabs, and other iconic Bay species.

These restored reefs are all the more important as climate change threatens to make conditions even more volatile for the Bay's oysters. More frequent, extreme storms, for example, could send gushes of fresh water into the Bay—creating rapid drops in salinity that can be fatal to oysters. Extremely wet weather in 2018 and 2019 led to oyster and clam deaths in the Bay and also caused problems for the hatcheries that produce oyster larvae for restoration and aquaculture.

"It's only going to get harder, so you have to control the quality and quantity of water entering the Bay now, through stormwater management, wastewater management, and land use," says Colden. "Because climate change is going to throw a wrench in everything. We need to hold the line on how much oyster habitat is available to us now."