To Unpave Paradise, Pull Up a Parking Lot 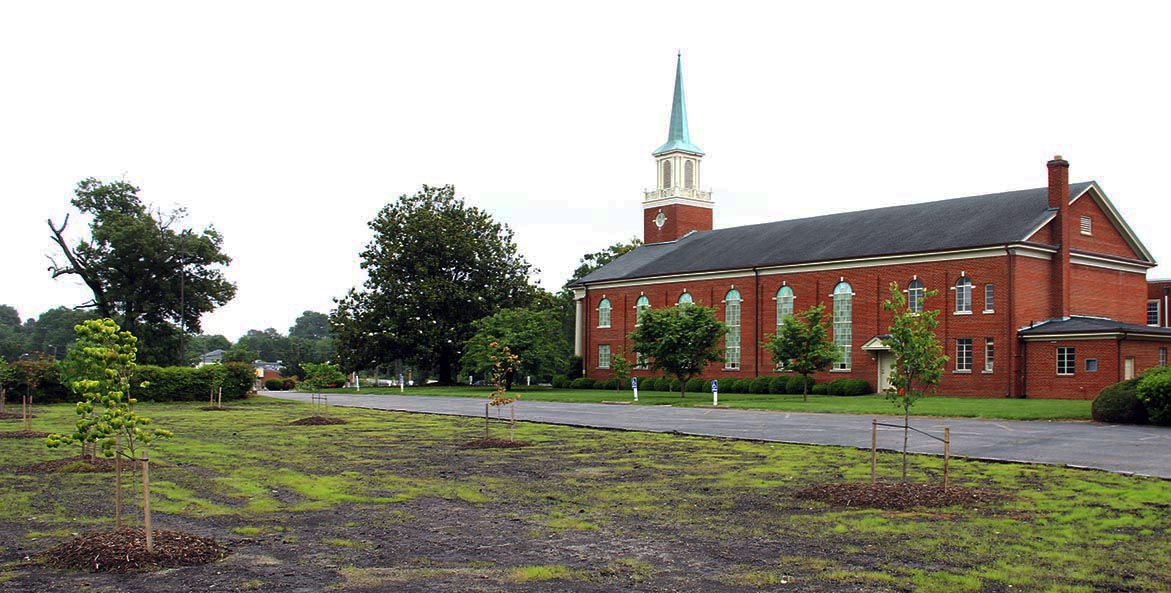 In the south side of Richmond, Branch's Baptist Church had a problem. With attendance lower than in the past, the expansive parking lots surrounding the church no longer filled up on Sundays. Because those same parking lots create polluted runoff during heavy rains, the church was required to pay about $600 per month in stormwater fees to the City of Richmond.

What's more, on hot summer days the asphalt surrounding the church absorbed and radiated heat. Research shows that paved-over, treeless stretches of Richmond can be up to 16 degrees hotter in the summer than leafier parts of the city. People living in those areas suffer disproportionately from extreme heat. City-wide, the issue has gained significant attention.

The church found a solution by looking to nature. Working with CBF, church members recently removed nearly 23,000 square feet of asphalt and concrete and are planting the once-paved areas with trees. The church grounds are now greener and more beautiful, and there are still plenty of parking spaces for congregants. Because the project significantly reduces polluted runoff to the James River, the city cut the church's stormwater fee in half, saving them thousands of dollars a year. 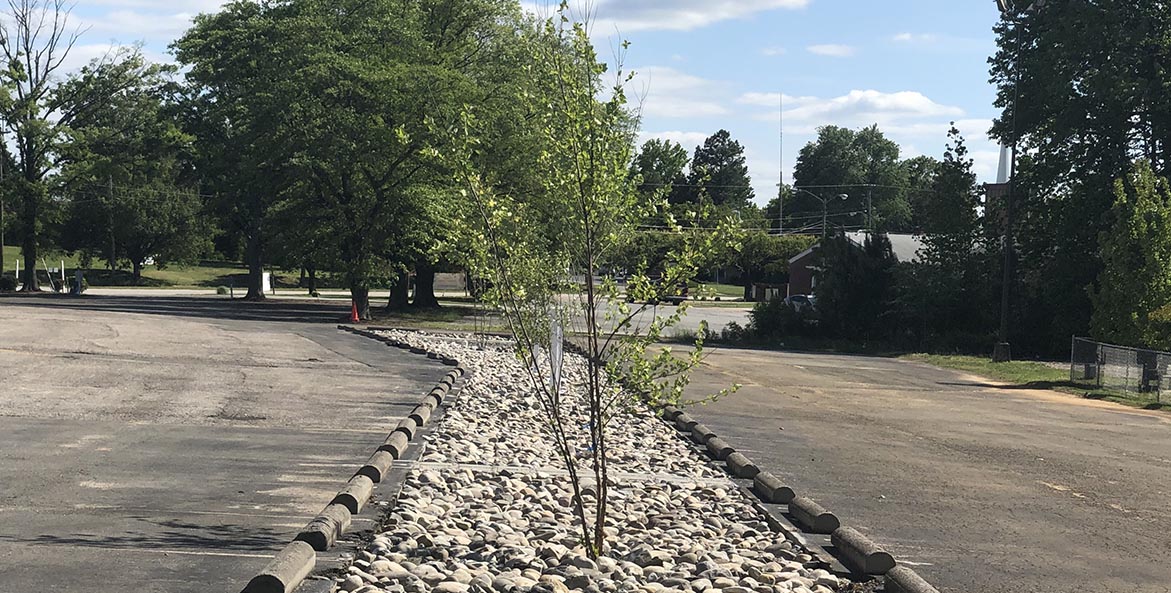 The new strip between parking spaces at Branch's Baptist Chuch in Richmond, VA keeps polluted runoff from flowing into local waterways with a series of rocky wells and trenches.

"We might have had different reasons for doing this project, but we had the same goal—to stop some of that stormwater runoff," said Jerry Smith, facilities chairman for Branch's Baptist Church. "I wanted us to pay less in stormwater fees, CBF was focused on the benefits to the environment. This was a win for everyone."

This isn't the first time Branch's Baptist Church has teamed up with CBF. In 2018, volunteers from the church and community worked with CBF to plant more than 100 trees on church grounds with help from a Virginia Department of Forestry grant.

This year's work at the church built on that effort. A National Fish and Wildlife Foundation Small Watershed Grant to CBF is supporting the Greening Southside Richmond Project, which is planting trees to reduce runoff and cool some of Richmond's hottest neighborhoods. As part of that project, the effort at Branch's Baptist removed asphalt and concrete from three areas: 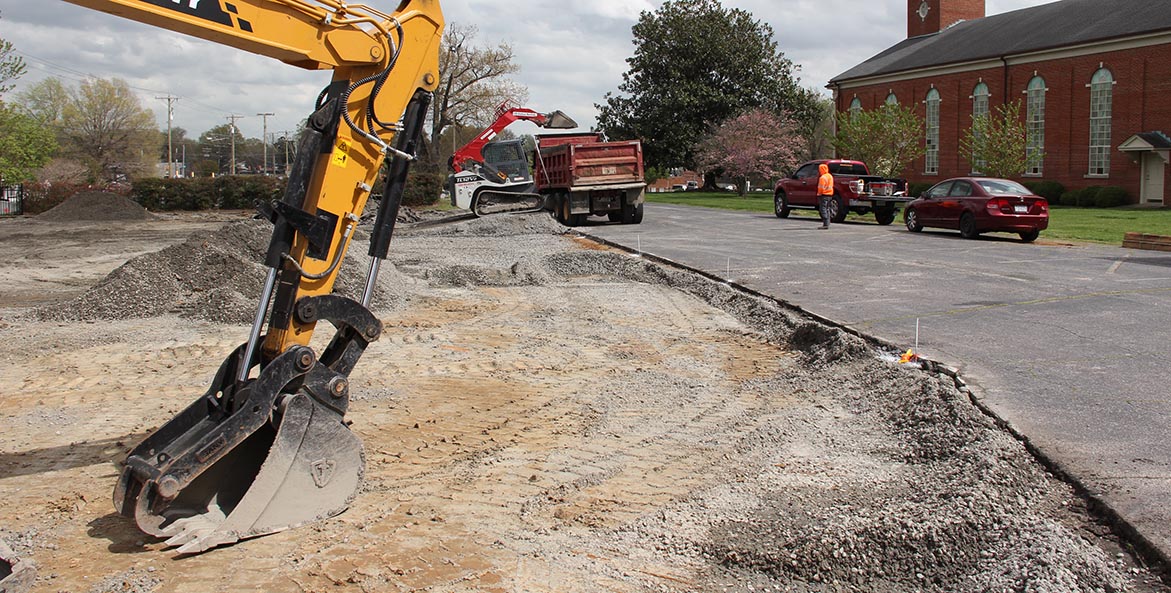 A backhoe and other heavy machinery breaks up the concrete and asphalt from the old parking lot at Branch's Baptist Church in Richmond, VA.

The parking lot transformation was an impressive process. Heavy machinery first broke up the concrete and asphalt and hauled it away. The poor, compacted soil beneath the pavement now had to be brought back to life.

A backhoe spread a four-inch layer of compost on the previously paved areas, mixing it with the compacted soil to a depth of 24 inches. Over the former basketball court, a one-inch layer of biochar was mixed in. This charcoal-like substance helps create healthy soil where plants can grow better.

Design work by AMT, an engineering firm, and construction by contractor Exact Stormwater Management, in coordination with the City of Richmond, ensured success. Richmond's Parks and Recreation Department completed the remediation work on the basketball court.

While the remediation of the basketball court was taking place outside, experts from the Virginia Department of Forestry led a workshop at the site attended by forestry and urban planning professionals, who were all interested in how to cool and beautify cities by planting trees in once-paved-over spaces.

While the transformation of the Branch's Baptist Church parking lot is a big deal for the church, it's still a drop in the bucket amidst the miles of concrete and asphalt in Richmond's southside.

But the newly planted trees are an inspiration for what's possible. By reclaiming unused paved areas and planting them with life-giving trees, the church is serving as an important model for how to create a cooler, greener, and healthier place for people living in south Richmond while also restoring the James River. 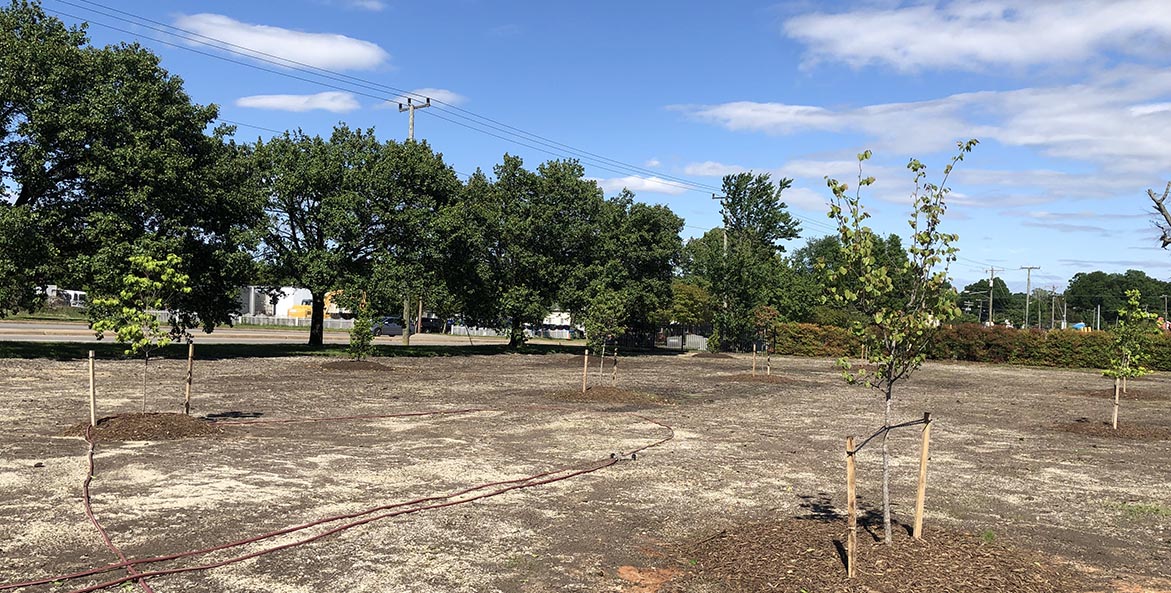 Old parking lot after the soil remediation and tree plantings.