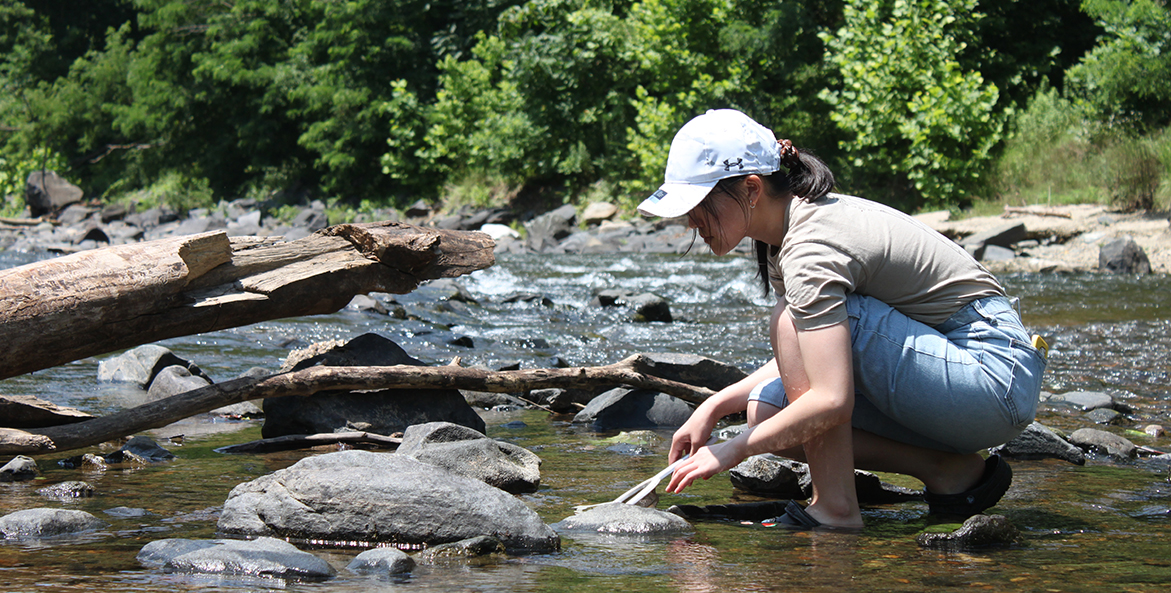 Jiayi Wang, a rising junior at Langley High School, surveys the Patapsco River for macroinvertebrates as part of a CBF Student Leadership course.

Kicking off a week-long exploration of the Chesapeake Bay, students connect the dots between climate change, communities, and water quality in Ellicott City, Maryland and beyond

It's a sunny day on the Patapsco River. Hot enough to enjoy wading knee-deep through the cool water. And hot enough that the 13 students combing the rocky riverbed move quickly to shade the dozens of strange and marvelous 'bugs' they pull from its depths. They make careful note of the fearsome hellgrammites and translucent crayfish. These denizens of the Patapsco's underbelly, known as macro-invertebrates, offer clues about the river's health. 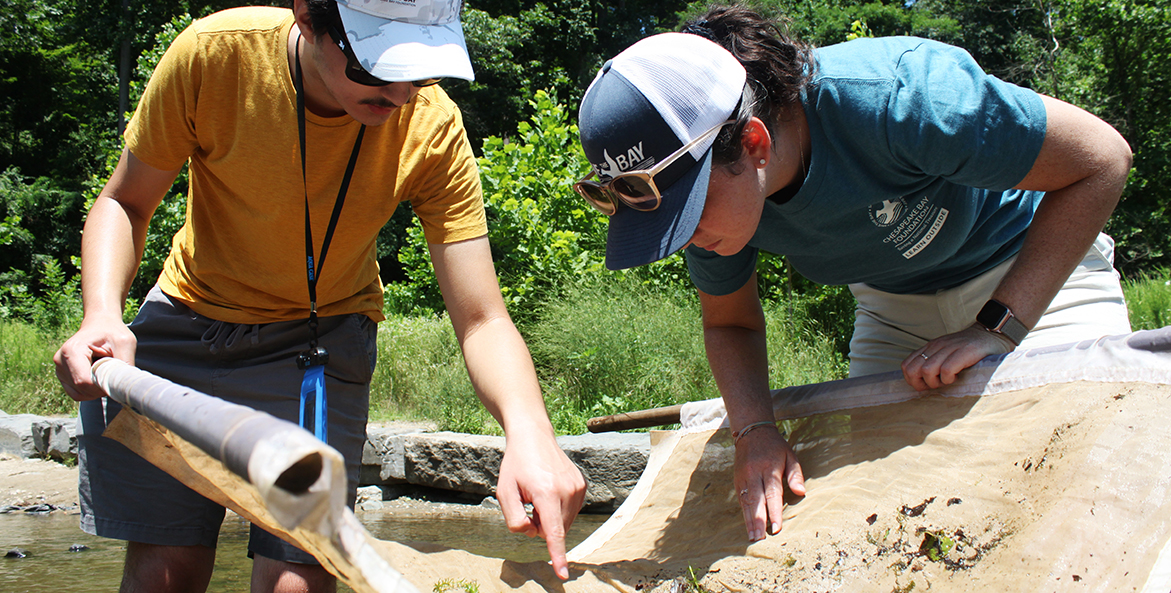 Wading into the Patapsco River at Patapsco Valley State Park, students and CBF educators use nets to survey for macroinvertebrates, the tiny aquatic 'bugs' that help indicate the quality of the water.

So, too, do the piles of thick logs and rocks tossed on its banks.

"What do you think put those logs there?" asks Jocelyn Tuttle, CBF's Maryland Student Leadership Coordinator, who is part of the CBF Education team leading the group on a week-long exploration of the Chesapeake Bay watershed in Maryland.

Storms. Big ones. After lunch, the group heads several miles downstream, where the Patapsco is joined by the Tiber River in Ellicott City, Maryland. The historic mill town has always been vulnerable to floods, but in recent years it has become a poster child for the type of extreme storms that are becoming more frequent and intense due to climate change. In 2016, more than six inches of rain fell over the city in just two hours. Flash floods swept down Main Street, washing away cars, pouring into restaurants, and ultimately killing two people. Two years later, it happened again. 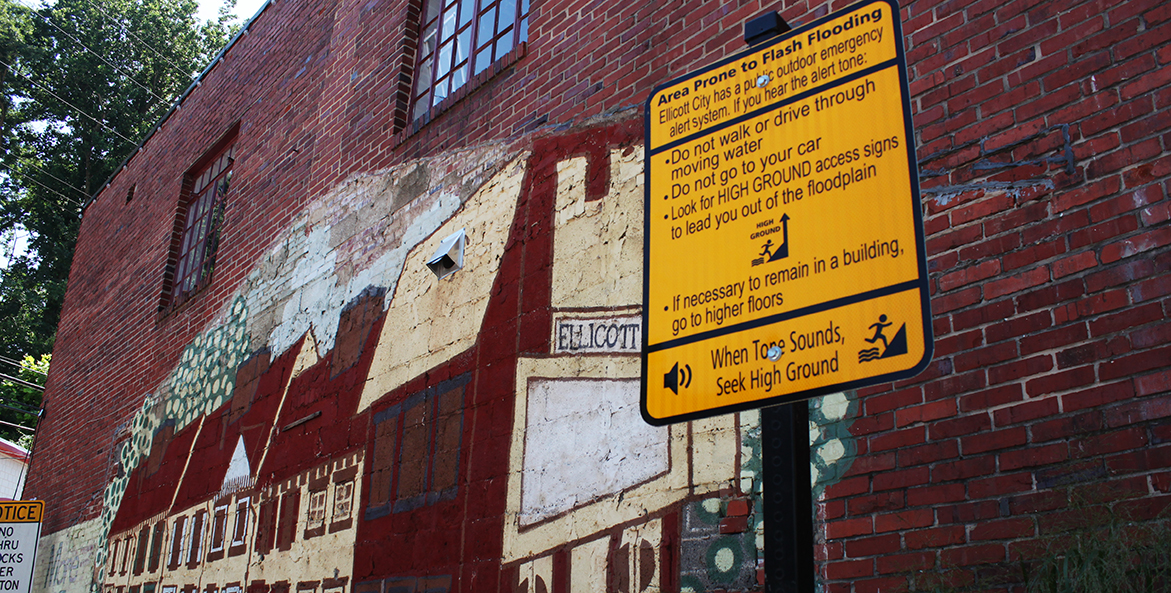 Signs in Ellicott City, Maryland warn passerby of the danger from flash floods, which swept through downtown in both 2016 and 2018 with devastating consequences.

The students pass storefronts still boarded up from the damage. A yellow sign warns that the area is prone to flash flooding. Other signs mark escape routes to higher ground up narrow alley steps.

"I took an environmental science course my junior year and we talked a lot about climate change," says Jake Sobltka, a rising senior at Northern High School in Chaneyville, Maryland. "It's definitely cooler to learn about it somewhere you can actually see it." 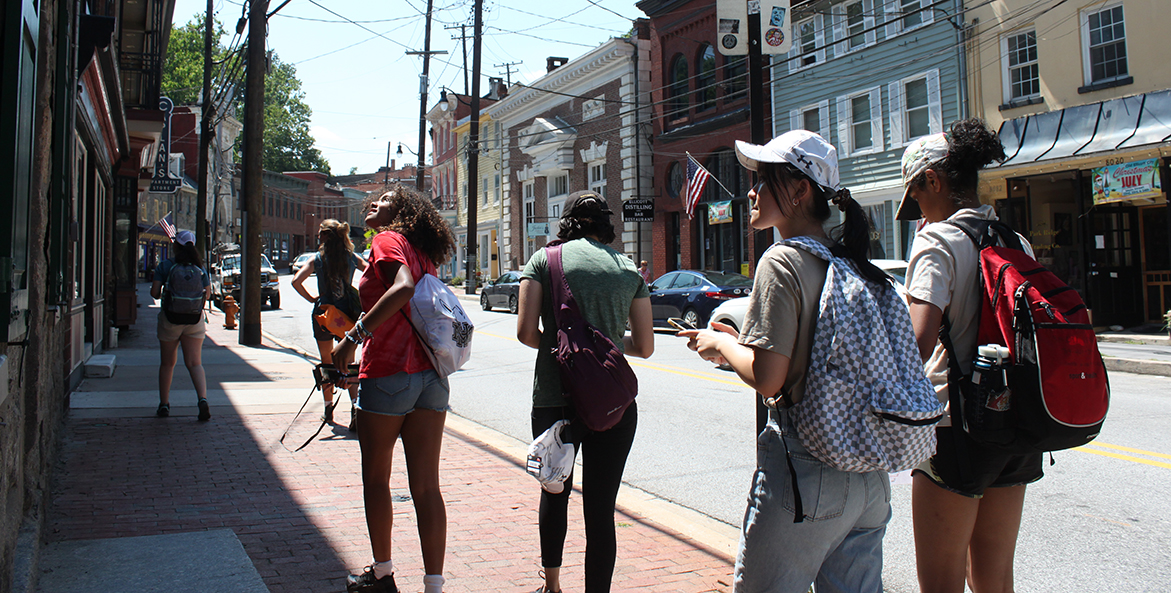 Students look for signs of the devastating floods that swept through downtown Ellicott City, Maryland in both 2016 and 2018–the kind of disaster that could become more frequent as storms intensify due to climate change.

Ellicott City is only the start. Over the course of the week, the students are exploring how climate change affects not only the communities who call the Bay watershed home, but also water quality and the critters that depend on clean water—like those hellgrammites and the fish that eat them. They're also finding out ways we can improve water quality and mitigate climate change at the same time. 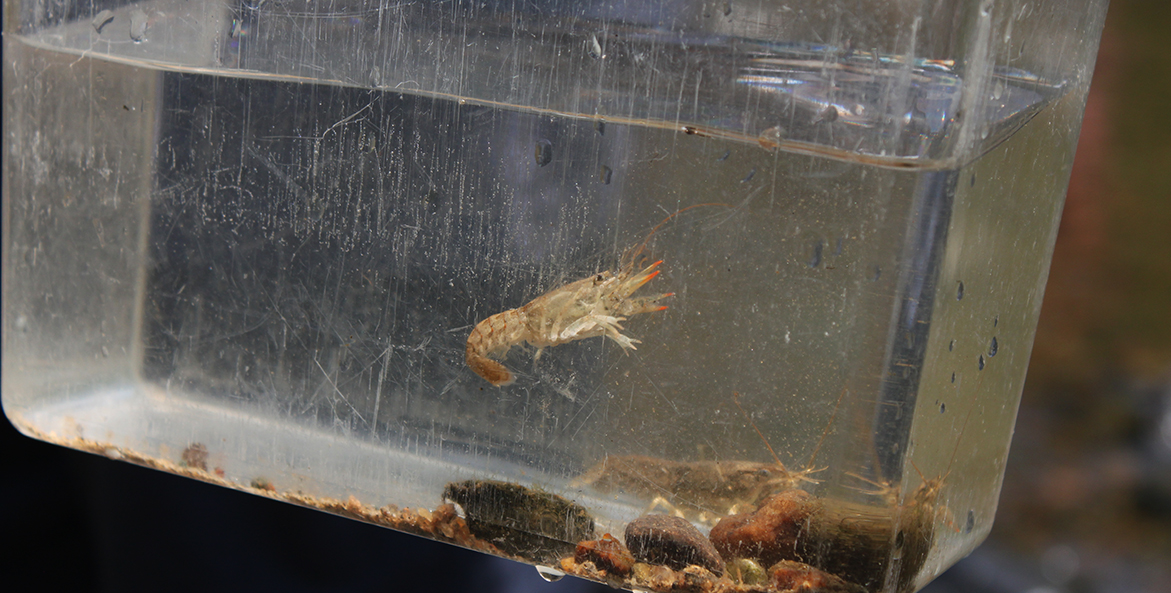 A crayfish, collected at Patapsco Valley State Park, is one of more than a dozen macroinvertebrates that students collected from the river to gauge the water quality as part of a CBF Student Leadership course.

For example, on the second day, they visit CBF's Clagett Farm, where managers employ conservation best management practices to build the health of the soil and raise native tree saplings to plant as buffers along streams. Both healthy soils and trees help capture nitrogen—a nutrient that can degrade water quality—and carbon dioxide, which contributes to climate change when it's released into the atmosphere.

"I didn't know planting something like white clover could help fix nitrogen and keep extra nutrients in the soil," says Sachi Verma, a rising junior at Langley High School in Northern Virginia. "And I have a lot of respect for the farmers for weeding all of those plants—there were a lot of us doing it just for the day, and it was still hard. They do it all the time."

"Being on a farm was very cool," says Aamnah Malik, who is also a rising junior at Langley High School. "Where we're from in Northern Virginia, we don't get many chances to be on a farm. It's pretty suburban. So, it's neat to see how it's all connected."

Connected all the way down to the Chesapeake Bay, where the students spent the final part of their week exploring the marshes and waters near CBF's Karen Noonan Memorial Environmental Education Center on the Eastern Shore of Maryland. In a poem written at the center, Ethan J. Defensor, a rising junior at The Park School of Baltimore, summed up the experience:

The good belly flop
The interactive learning
The shallow canoe
...a beautiful adventure. 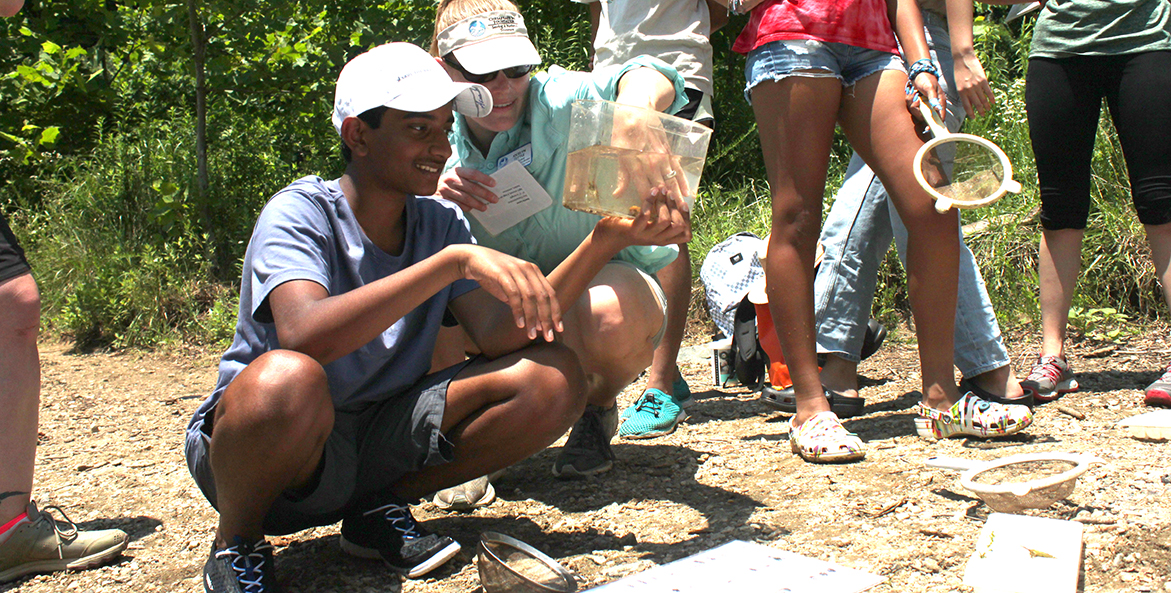