Two Jars of Water, and a Lasting Environmental Legacy for Pennsylvania 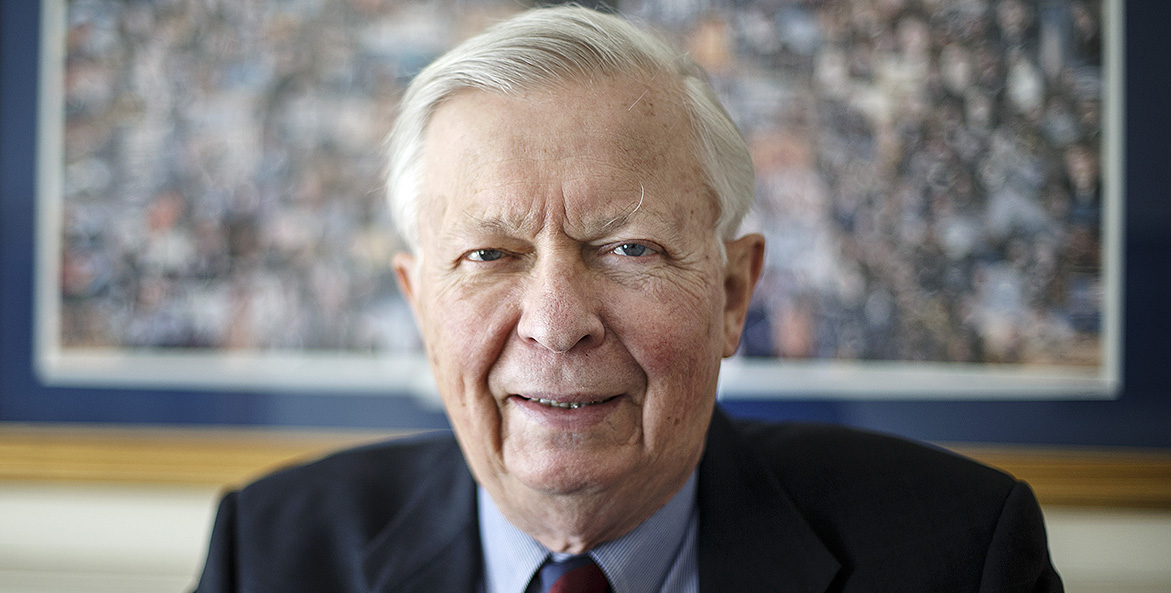 Franklin L. Kury was elected to the Pennsylvania General Assembly in 1966 on the promise of "clean streams and clean politics," and went on to author the state constitution's Environmental Rights Amendment. More than fifty years after it passed, he reflects on how the amendment continues to be a driver for protecting all Pennsylvanians' rights to clean water, air, and a healthy environment.

When the federal Clean Water Act was established 50 years ago to regulate pollution to the country's rivers and streams and set quality standards for surface waters, the Commonwealth of Pennsylvania already had a Clean Streams Law and an Environmental Rights Amendment (ERA) to its Constitution on the books.

As a Keystone State legislator, Franklin L. Kury drafted the ERA and was a principal co-author of the Clean Streams Law.

"Franklin Kury has left an amazing legacy for this Commonwealth," says Trisha Salvia, CBF Staff Attorney in Pennsylvania. "In 1966, his campaign slogan was 'for clean streams and clean politics.' A rare slogan today, but it was a promise he kept to the Commonwealth as this led to his landmark legislation. The amendment gives Pennsylvanians a Constitutional right to clean air, pure water, and to the preservation of the natural, scenic, historic, and esthetic values of the environment for citizens today as well as future generations."

His political life was ignited in 1966 by clean streams legislation, when his would-be opponent voted against an amendment that would bring the coal companies under the Clean Streams Law already on the books. 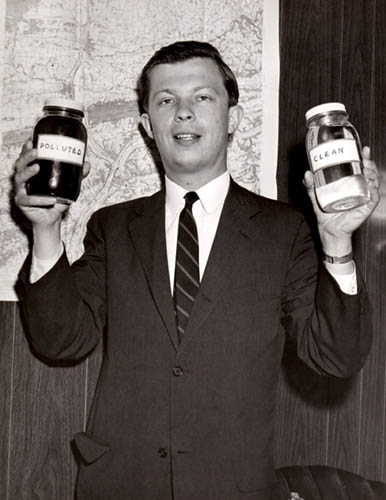 Franklin Kury with two jars of water taken from a creek near Sunbury, Northumberland County, during his 1966 campaign for the Pennsylvania legislature.

It was then that a picture taken by his wife Elizabeth, showing two jars of water taken from a creek near Sunbury, Northumberland County, changed the fortunes of Kury and clean water. One jar had dirty water in it, the other had clear water.

The image and the issue got Kury elected.

"My wife took that picture to illustrate the issue. I had no thought of a constitutional amendment at that time," Kury says. "I just wanted to get in there and do something about clean streams."

Representative Kury helped draft part of an overall restructuring of Pennsylvania's water law, and it was signed in 1970.

Kury, 85 and a retired attorney, grew up in Sunbury around the Susquehanna River, and now lives in Hummelstown, Dauphin County.

He fathered the Environmental Rights Amendment when the environmental tide in the Pennsylvania legislature was never higher.

"People woke up to the fact that they had been had, exploited by the different coal and steel companies and others," Kury says. "We passed 12 or 15 bills; more bills for the environment in that time period (1968-72) than any time in the history of the state before or since."

While serving on the House Conservation Committee, Kury read about the State of New York amending its constitution for a special provision on forest law, and the idea for an amendment hit him.

"With all these bills we were considering, bills could be repealed or amended, but a constitutional amendment will stay forever," Kury says. "I had a good course in constitutional law, in law school, and was also a smart-enough politician to know this was the time to do it."

His draft of an Environmental Rights Amendment to Pennsylvania's Constitution went through some changes as it was passed by the House and Senate. It was enacted on the first Earth Day in 1970 and ratified by Pennsylvania's voters by a 4-1 margin a year later on May 18, 1971.

"I feel good about my legislative experience," Kury says. "But this gives me the most satisfaction."

The Constitution of Pennsylvania, Article 1, Section 27: "Natural Resources and the Public Estate" reads:

The people have a right to clean air, pure water, and to the preservation of the natural, scenic, historic and esthetic values of the environment. Pennsylvania's public natural resources are the common property of all the people, including generations yet to come. As trustee of these resources, the Commonwealth shall conserve and maintain them for the benefit of all the people.

The University of Pennsylvania Carey Law School called it the strongest environmental amendment in the country.

New York passed an Environmental Rights Amendment in 2021. Advocates in Maryland are calling for an amendment as well.

The ERA declares the people's right to a clean environment and makes government the trustee of public natural resources.

"It means the average person has a right to a clean and healthy environment, and if they see a violation they have standing to go to court and challenge that," Kury says. "That has happened a number of times."

A trustee is defined as every state official.

Are the trustees of these resources living up to the Environmental Rights Amendment?

"I think in the legislature some members are very keen on it, others are not," Kury says. "As a body I'd say they're not. The overall sense we had to pass the amendment in 1971 is gone. It's dissipated."

Kury says the beauty of the amendment as it is written, is the trust provision and the right of the public.

"They have the right to go to court and challenge an action," he says. "That is lacking under any other circumstance."

Although climate change was not seen in 1971 as the threat it is today, the author says the amendment as written covers it.

"Climate change is an immediate threat to our survival," Kury says. "Nobody heard of it back then. I drafted it in broad language. Because we wrote it in a broad principle of law, it applies to climate change, as well it should. Climate change creates an unhealthy environment. So, it is very important that we use this amendment to fight climate change."

Kury's book, The Constitutional Question to Save the Planet: The Peoples' Right to a Healthy Environment, was published in 2021. He says the book's message is that the principles of Article 1, Section 27 can be the basis for stopping climate change and getting the government to act on the people's side, not the side of the fossil fuel industry

"The amendment is an effective tool to advocate for good conservation improvements or to defend against bad practices, especially in the fight for clean water and climate change," Trisha Salvia adds. "Pennsylvania is blessed to have a powerful Environmental Rights Amendment in our Constitution that lets its citizens fight to protect our natural resources for future generations."

Kury would like to see Pennsylvania's Environment Rights Amendment applied beyond Commonwealth borders and adopted into the U.S. Constitution.

"The U.S. Constitution is totally silent when it comes to the environment," he says.

"I'm very disappointed that we can't get that done. If this was in the federal Constitution, it would make a real change because American citizens could sue the government for not carrying out their obligations to the environment," he adds.

"The main thing is, if the countries of the world—United States, India, China, European Union—if we got together on the Article 1, Section 27 principles, we would not have to worry about our environmental future here on Earth," Kury says. "It's a tall order, but we've got a big problem. We have no choice but to try."