A New Year, a New Governor, a New Chance to Clean up the Chesapeake Bay 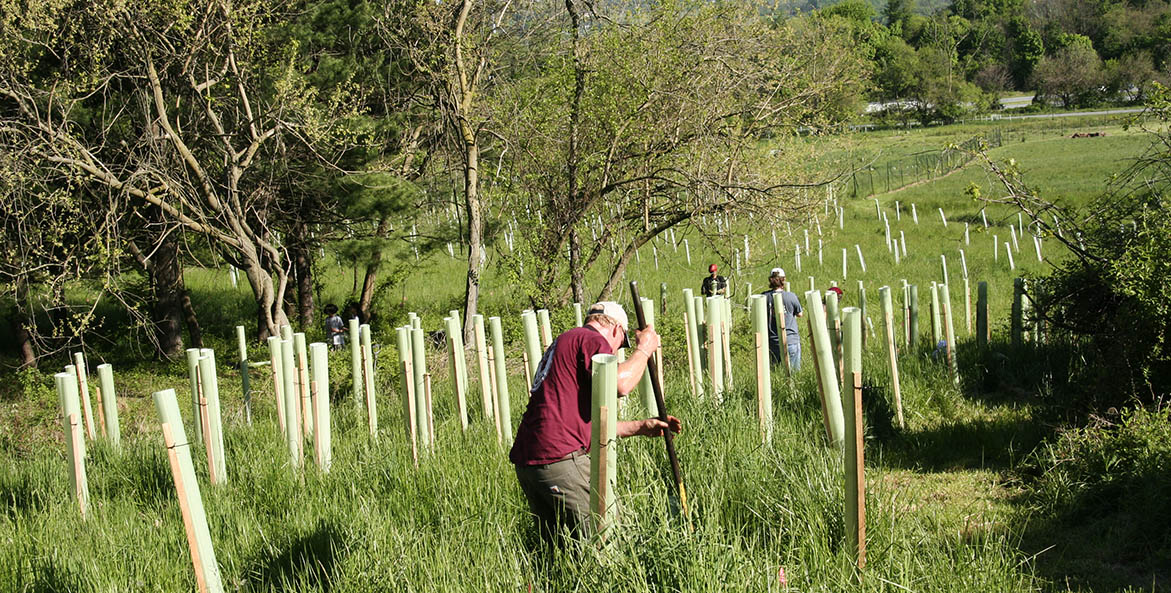 In Pennsylvania, more than 90 percent of remaining pollution reductions are expected from farms. Significant, sustained funding will be required to assist farmers in implementing conservation practices, including planting trees like these at the Horn Farm Center near York.

Sustained funding for clean water, more trees, and fewer cows in streams all are on the wish list for Pa. in 2023

This opinion piece was originally published in the Pennsylvania Capital-Star on January 20, 2023.

As one year ends and another begins, many of us have hope and optimism for the new year.

In these early days of 2023, the Chesapeake Bay Foundation (CBF) is encouraged that momentum in 2022 can bring us closer to cleaner rivers and streams in Pennsylvania.

Most notably, the state legislature voted last year to create the $220 million Clean Streams Fund. Over the coming years investments from the fund can restore and protect the rivers and streams we wade in, that supply drinking water, and that we rely upon for our health, well-being, and quality of life.

The hallmark of the fund is a new statewide cost-share program called the Agricultural Conservation Assistance Program (ACAP). It will help Pennsylvania’s 50,000-plus family farmers design and install conservation practices that keep soils and nutrients on the farm instead of the water.

Make no mistake, with roughly 28,000 miles of polluted rivers and streams statewide, and facing the rising challenges of climate change, Pennsylvania has a lot of work to do to get back on track and meet its pollution reduction commitments.

Here are a few things CBF would like to see happen in the new year, to accelerate the Commonwealth toward the clean water that is the constitutional right of every Pennsylvanian.

We urge the new legislative session, and new administration of Governor Josh Shapiro, to take the Commonwealth’s commitment to clean water to the next level and follow the Clean Water Blueprint for success.

In 2023, we look to the governor and General Assembly to increase sustained investments of financial and technical resources in the Clean Streams Fund and ACAP.

For years, efforts to reduce pollution into local waters have been woefully underfunded. The Commonwealth’s latest plan to achieve clean water (its Phase 3 Watershed Implementation Plan, or WIP) admits it will take an additional $320 million per year to achieve its Blueprint goals for reducing pollution.

As for Pennsylvania’s WIP, CBF calls on the Commonwealth for enhancements so that the plan fully meets pollution reduction targets. The third version of the WIP still does not include sustained funding and lacks the creditable pollution-reduction strategies to fully achieve the Clean Water Blueprint.

Landmark investments made in 2022 for clean streams are a significant down-payment to protect and improve our health, quality of life, and the economic viability of the family farm.

Long-term funding by the Commonwealth in a strong Clean Streams Fund can also reduce the impacts of polluted runoff from urban areas, clean up acid mine drainage, and help plant more trees along streams and streets.

More than 90 percent of the Commonwealth’s remaining pollution reductions must come from agriculture. It is a daunting challenge indeed.

But farmers have shown they are willing to invest their time, land, limited funds, and effort to clean and protect local rivers and streams. They need greater investments like those that will come from ACAP, if they are to finish the job.

All conservation practices would be eligible for ACAP cost-share funds. Among them, CBF would like to see more trees planted, and fewer livestock in streams.

CBF is especially proud of progress made by the Keystone 10 Million Trees Partnership, which planted its 5 millionth tree in October. It is a milestone toward the Commonwealth’s mammoth goal for forest buffers. Planting trees is among the most cost-effective methods for filtering and absorbing pollution before it reaches local waters.

As for livestock fencing, direct deposits of manure by farm animals standing in streams seriously degrade water quality, and threaten the health of animals and people. Livestock in streams can introduce pathogens to surface water, the source of drinking water for most Pennsylvanians. Herd health and milk and beef production are known to improve when livestock has clean water to drink.

Stormwater is another significant source of pollution and communities across Pennsylvania are finding ways to pay for and upgrade infrastructure and manage runoff. The Commonwealth should start doing its part by paying its fair share of stormwater costs for state-owned properties.

Capital Region Water in Harrisburg informed a Senate committee last January that the Commonwealth owes them $387,000 annually for assessments on state-owned properties beginning in October 2020. The Hampden Sewer Authority in Cumberland County testified it is owed more than $1.2 million since October 2015.

Public and private landowners, including businesses, churches, and the federal government, are paying to support stormwater improvements, as a result of federal and state mandates. The Commonwealth should so too.

Lastly, the Environmental Rights Amendment to Pennsylvania’s Constitution (Article 1, Section 27) states, in part: “The people have a right to clean air, pure water, and to the preservation of the natural, scenic, historic and esthetic values of the environment. Pennsylvania’s public natural resources are the common property of all the people, including generations yet to come. As trustee of these resources, the Commonwealth shall conserve and maintain them for the benefit of all the people.”

CBF looks forward to working with the Governor and legislators to uphold that right, and to leave a legacy of clean water for future generations.