More Than Just a Love of Oysters 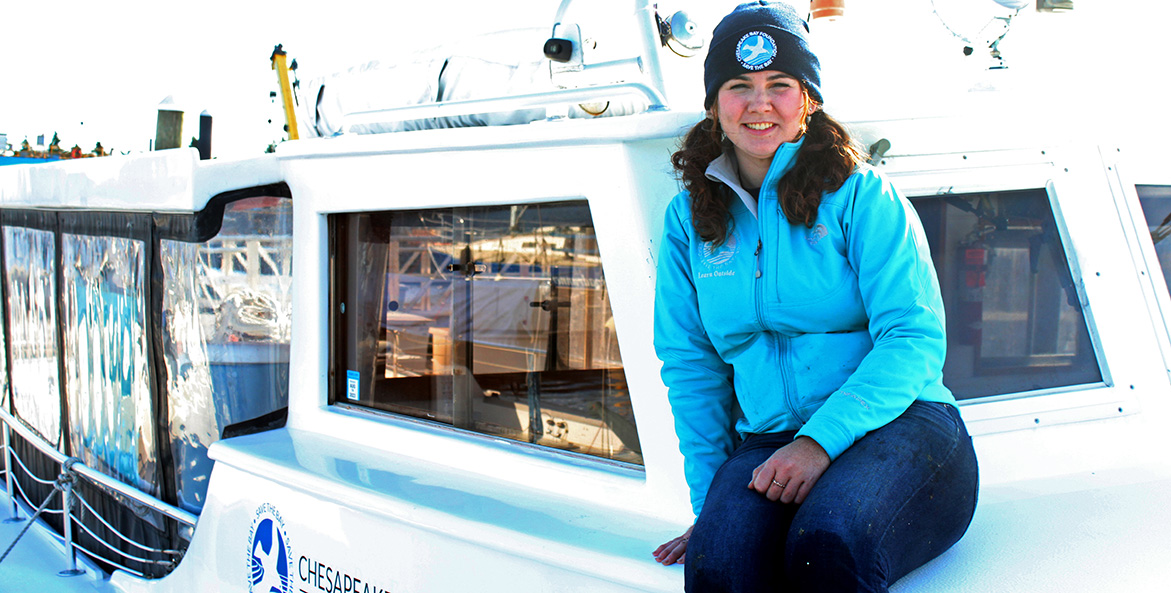 A former CBF student leader, Baltimore educator Jess Jenkins describes what brought her back to the Bay

It’s a chilly day in December as the volunteers arrive, all bundled up at Baltimore’s Downtown Sailing Center. The task is simple, pull all 60 oyster cages out of Baltimore Harbor, scrub off all the muck, and put the cages back in the water. Plenty of people would cringe at the idea, but these volunteers jump right into the work.

The cages hold one of the Chesapeake’s most vital soldiers, Crassostrea virginica, the Eastern oyster. One of the Bay’s keystone species, Eastern oysters are essential for Bay health. Oysters eat excess algae out of the water, improving water quality, clarity, and interrupting the eutrophication cycle. They also provide a great habitat for small Bay animals that provide a foundation for the food webs that support some of the Bay’s most famous and valuable seafood. In short, the Bay needs oysters to be healthy. But currently there aren’t enough of them.

One of our signature programs that helps restore the Bay’s critical oyster population is CBF’s oyster gardening program. Maryland and Virginia residents can sign up to raise the bivalves off their docks. Today’s cage cleaning aims to get those who do not live on or near the Bay or its rivers, especially in Baltimore City, involved in the process. Oysters grow best on top of one another, forming large three-dimensional oyster reefs over many generations. The close quarters make reproduction easier and thrust the oysters up into the nutrient-rich water column and away from the muddy bottom that might bury and suffocate them.

When oysters reproduce, their babies spend the first moments of their lives floating through the water as microscopic plankton. As the oysters grow larger, they need a hard surface to attach themselves to, as they will spend the rest of their lives stuck in just one place or “sessile.”

In order to recreate this natural resource, local seafood restaurants and oyster enthusiasts donate empty oyster shells for the baby oysters or “spat” to attach to. These “spat-on-shell” are then given to oyster gardeners to raise in cages for nine months. People aren’t the only ones who think oysters are a delicious clump of protein so the cages provide some additional protection from larger predators until the oysters grow bigger, with stronger shells.

After being in the cages for nine months here at Baltimore’s Sailing Center, the oysters will be taken out to a sanctuary reef underneath the Key Bridge around Fort Carroll to help clean and filter the Patapsco River and eventually the Bay. 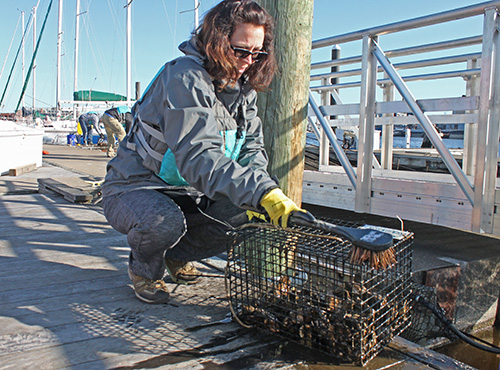 A volunteer scrubs an oyster cage during a cage cleaning event at Baltimore's Downtown Sailing Center.

For me this is more than just a love of Bay wildlife. My story began about 10 years ago at my grandparent’s house. The octogenarian couple live in Shady Side, Maryland, with one acre of unspoiled land that goes all the way to the Chesapeake Bay. The weathered house on Jack Creek with red crescent moon shutters has withstood several hurricanes and has no air conditioning.

It used to be protected by a barrier island, which I explored as a kid when my grandpa used to take us over there in his rowboat. There were trees, a little beach, and lots of bushes and shrubs. It was small but provided a necessary barrier between the often-unforgiving Bay and my grandparent’s house, especially during hurricanes.

Over the years that small barrier island got smaller and smaller until it disappeared entirely right before my eyes. Often, we think of environmental crises in terms of things that will happen far away or in the distant future, yet here was change happening right before my young eyes. I knew I had to do something.

I started a two-year oyster gardening journey with CBF as part of its Student Leadership Program. I picked up some spat, built four cages, and set up my oysters on the dock at my grandparent’s house. I raised them for nine months, all while keeping a video diary, creating how-to videos, and keeping a blog.

Fast forward through the rest of my high school career, several internships, a college degree, and three years at the National Aquarium and here I am.

As the Baltimore Harbor Program Manager and Educator, I work aboard the CBF vessel the Snow Goose in Baltimore Harbor teaching students about the life in the harbor, human impacts, the larger Chesapeake Bay watershed, and what they can do to help in their school communities. Working at CBF and managing the Baltimore Harbor Program is a full-circle moment for me and a dream come true. Not only do I get to spend every day outdoors and on the water, but I get to share my love of the Bay with people and help them to better understand and appreciate our local waterways.

Leaping from oyster cage to oyster cage during this chilly December day of oyster gardening, I dig through the muck left behind after scrubbing to find tiny, sometimes invisible-seeming critters on the dock. I point them out on Oyster Reef ID guides, showing their names to the volunteers.

“These little guys are called bristleworms, science name polychaete. They have an extra set of jaws called proboscis that they can shoot out of their mouths to catch food, like the monster in the movie Alien.”

“They feed on waste that oysters don’t need and then they themselves are a great food for small fish like gobies and blennies. And then those guys are great foods for rockfish!”

“Well then I’m on board with them!”

Every day I get to change people’s expectations about what the Baltimore Harbor is and can be. I get to watch students go from being afraid to touch the harbor water to interacting with fish and oysters. It’s an incredible feeling and just the latest chapter in my story of saving the Bay!