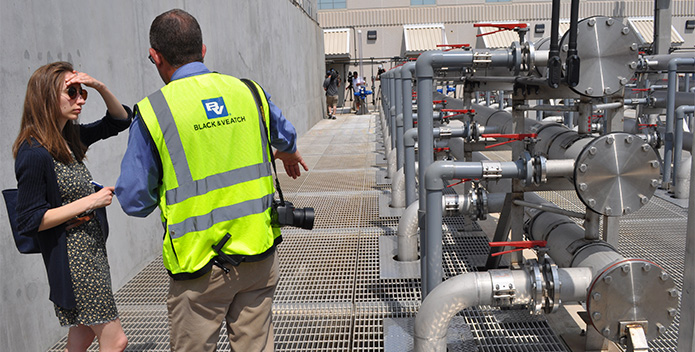 It's not often you see people this excited about a sewage plant.

But there was former Governor Bob Ehrlich standing in the hot sun in front of the Cox Creek Water Reclamation Facility in Anne Arundel County speaking glowingly about the benefits of the "flush tax." Beside him was equally enthusiastic County Executive Steve Schuh and other dignitaries.

"It was controversial at the time. We had some Republican and some Democrat opposition," Ehrlich said of the Bay Restoration Fund, derided at the time as the flush tax. "We knew in the end that despite the naysayers, we knew it would make Maryland better."

The speech-making was Wednesday at a ceremony to mark an upgrade to the Cox Creek plant. After years of design and construction, and $141 million in public dollars, the plant on Monday starting using state-of-the art technology to reduce further the amount of nutrient pollution flowing into the Patapsco River and the Chesapeake Bay.

You know what? I'm excited, too!

It wasn't so much the tour of the improvements at the plant. The upgrades looked like a bunch of new pipes to my untrained eye. Phipps explained the technology to the crowd: Membranes extract nutrients from the waste stream. There are 1,300 miles of membranes. They looked like platinum blond hair to me, these membranes. When the hair gets dirty with nutrients the high-tech system washes it with a kind of bleach. Okay.

But what is really interesting to me is these sorts of improvements at Maryland sewer plants are a large part of why the water in the Bay is getting cleaner. Ehrlich said he's noticed the change in recent years. "I spend a lot of time on the water," he said in his remarks. He said the water is clearer in the Bay than he has seen in years. Scientists agree, although they caution we have a long way to go before the Chesapeake is healthy again.

As Cox Creek and other large sewage plants are upgraded, especially the state's two largest plants in Baltimore, we should see more significant water quality improvements. Cox Creek is the 54th plant to be upgraded in Maryland out of 67 major plants. Baltimore's two massive plants are scheduled to be finished in the next six months. That work will double the nitrogen reductions from sewage plants in Maryland.

This is what the Chesapeake Bay Foundation (CBF) envisioned 14 years ago. We pushed for the flush fee in the legislature in 2004. We knew sewage plants were built mostly to take bacteria out of waste water. Nutrients such as nitrogen and phosphorus that are in human waste weren't sufficiently being removed from the effluent before it was discharged into local streams.

The Bay is sick from too many nutrients. We knew we had to reduce the nutrients discharged from sewage plants, farm fields, city streets, septic systems, and other sources. We also realized the cost would be enormous to upgrade sewage plants to reduce nearly all nutrients. We needed a dedicated source of funding to invest in this massive undertaking. The legislature approved the Bay Restoration Fund and Governor Ehrlich signed off.

The challenge ahead for Maryland is upgrading stormwater systems. Those are the pipes and culverts and other parts of the drainage infrastructure in suburbs and cities. In places such as Anne Arundel County, Baltimore City, Baltimore County and other densely populated areas, there is almost as much nutrient pollution from polluted runoff as from old sewage plants. And it's even more expensive to upgrade those systems than sewage plants.

In 2012 CBF pushed hard for a dedicated source of funding for that work, just like we did for the flush tax. The new proposal was derided just like the earlier (now successful) one. It was called the "rain tax" by opponents. Many counties refused to collect it. That's too bad. Their water will not be cleaned up as quickly.

We hope that in a few years we will be hearing glad speeches about completed stormwater projects in Anne Arundel—which did dedicate a fee to the work.