Amazing Life in the Lafayette's Waters! 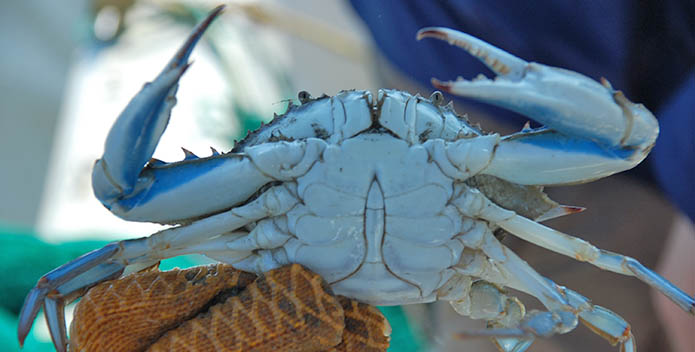 A healthy blue crab caught and released in the Lafayette River during the September 2017 survey.

Amazing critters are thriving in the Lafayette River, an urban waterway entirely within Norfolk city limits. The great variety of life found on a recent biological survey of the Lafayette River is one more sign that this once-polluted river is getting better.

In mid-September scientists from the Chesapeake Bay Foundation and Elizabeth River Project (ERP) observed both common species such blue crabs, oysters, speckled trout, and spot, as well as a host of more unusual creatures including squid, sea robins, mantis shrimp, brown shrimp, and a southern stingray. These were all caught in an otter trawl net used to survey life at 10 different sites along the Lafayette River and Wayne's Creek.

Long on Virginia's impaired waters list, a watershed-wide restoration effort is helping bring back the Lafayette. In the past, the river supported fewer species in less numbers, but it is now on course to becoming a healthy river that is home to more abundant wildlife in both species and numbers.

The revitalization of this waterway has included restoring dozens of acres oyster reefs that provide important habitat for a variety of species, construction of rain gardens and living shorelines throughout the watershed, and public education efforts aimed at spurring citizen actions that improve habitat in and around the river.

The biological surveys have been ongoing twice a year for about eight years as part of an effort to gauge river's response to these actions. Information collected by scientists include the location, size, and number of each species collected along with information on water quality.

The improvements on the Lafayette are thanks to generous grant funding and a collaborative effort among CBF and ERP, the City of Norfolk, National Oceanic and Atmospheric Administration (NOAA), Restore America's Estuaries, the National Fish and Wildlife Foundation, and the Army Corps of Engineers.

Check out our Facebook Photo Album of our Lafayette River survey below!