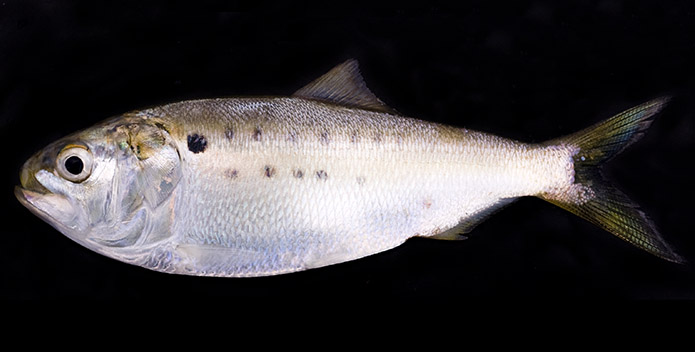 An Atlantic Menhaden (Brevoortia tyrannus), often called, "the most important fish in the sea."

The many names for "the most important fish in the sea"

While the Atlantic menhaden (Brevoortia tyrannus) is often called "the most important fish in the sea," the small, silvery fish has many names. In the Chesapeake, Captain John Smith's crew famously couldn't catch them with a frying pan in 1608, so the earliest English records come from the Massachusetts Bay Colony a decade later. The Wampanoag Native Tisquantum ("Squanto") taught the Pilgrims to "manure" their hills of corn with munnawhatteaug, which the good people of Plymouth Anglicized to menhaden. In Maine, the Abnaki people on the coast knew the abundant little fish as pookhagen, while Dutch settlers in the New Netherlands (New York) called them mossbunkers. Three centuries later, and the vernacular language and regional dialects find all three of the names still in use.

But there's more. In the Upper Chesapeake and elsewhere, the menhaden got lumped in with other members of the herring family as LYs, which came from elwyes, which came from alewives. This name applies to a specific spring-spawning river herring, Alosa pseudoharengus, which the bunker superficially resembles. The colloquial name sticks today, requiring a vocabulary adjustment for any Virginian (like me) who lives in Maryland. Go to the Carolinas and you may have to learn about fatbacks, a name that refers to menhaden's high oil content.

The most biologically interesting name is bugfish, which derives from a commensal (cooperative) relationship that menhaden have developed with a small and otherwise greasy-gray-ugly crustacean named Oniscus praegustator. This critter hitches a ride in the roof of the fish's mouth to catch some of the rich plankton soup passing through the bunker's funnel-like mouth to be caught by its gill rakers. Note the species (second) name, which translates from Latin as foretaster, in honor of the slaves condemned to sample food and beverage for Roman emperors during times of palace intrigue, when poison was a daily possibility.

But why is this little fish so well-known from Florida to Maine that it has so many names? Packed with nutritional value, menhaden are filter feeders that consume plankton and in turn are food for striped bass, bluefish, gray trout (weakfish),  and other important fish, as well as marine mammals and sea birds like gannets, ospreys, and loons. Though the boney, oily, unappetizing fish won't appear on any dinner menus anytime soon, they are a critical link in the marine food web. This little unsung hero converts the energy stored in algae and the tiny, shrimplike plankton that they eat into high-energy, high-protein food for many of our favorite predators. 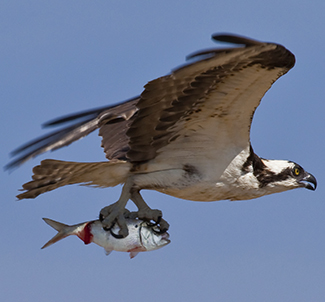 An osprey lands a menhaden meal. Menhaden are a critical food source for many Bay critters.

Despite its importance, the future of this critical fish is in jeopardy. The Chespeake Bay, which has historically been the most important nursery area for Atlantic menhaden, is not seeing the number of young menhaden it has historically, raising concerns for scientists, anglers, and anyone who cares about the health of the Bay.

Names and nicknames for all the critters in the Bay and its rivers and streams are a fun part of the rich culture of the Chesapeake. For "the most important fish in the sea," menhaden works most places, bunker is always safe in Virginia, and LY works most of the time in Maryland. Learn 'em all.