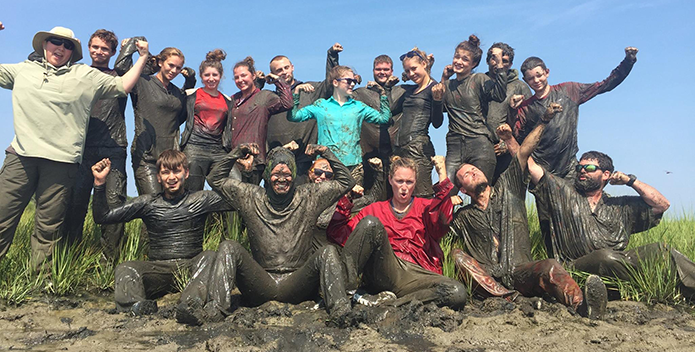 EDITOR'S NOTE: Carlisle High School junior, Emma Stone, was among 75 student leaders from the Bay watershed states of Pennsylvania, Maryland, and Virginia who engaged in a six-day summer course with CBF. The "50 Forward" educational experience celebrated CBF's first half-century of commitment to saving the Bay and local rivers and streams, and inspired the next generation to continue those efforts. Emma shares a journal of her own "50 Forward" impressions. This post has been lightly edited for length and clarity.

We visited a farm in Cumberland County. The owner, farmer Denny Garman, is a third-generation dairy farmer. Five people, all family, work on the farm of about 200 acres, and I find that very impressive. Denny sought out help from the Cumberland County Conservation District to make sure his farming practices weren't harming the waterways. He also wanted to implement additional best management practices on his property.

Later in the day, we canoed on the Conestoga River into the Susquehanna River and docked on Small Indian Rock and Big Indian Rock. There, we saw petroglyphs from Native Americans. The carvings are 1,000 years old. It was so cool to see things left behind from so many years ago, and we learned a lot about the drawings carved into the granite and mica rock. There were carvings of serpents that pointed to the sun during the summer and winter solstice and autumnal and spring equinox. It's so interesting that they knew when the longest and shortest days were without the technology that we have today.

In Maryland, we packed up from Elk Neck State Park and headed to Harborview Farms. We got to bed around 11 last night. The ground was more uncomfortable than it looked! Then we were up around 6-6:30 a.m.

At Trey Hill's Harborview Farm, we had so much fun. He taught us a lot about the logistics of farming, his crop choices, cover crops, and the pesticides he uses. We got to go inside one of the grain bins that had corn in it. It was kind of like quicksand. I was up to my knees. People were making corn angels, diving in, and seeing if they could run. It was definitely a highlight.

Then, at CHINO Farms, we checked out amazing grasslands. They are supposed to help bring back the Bobwhite quail and other quail species. The quail were hunted a lot in the 1900s, so there aren't as many now. A total of 276 grass species were planted on the farms, and hundreds of birds come to these grasslands.

This morning, it was relaxing to walk through the woods at Tuckahoe State Park in Maryland and observe. I liked having that time with nature. Last night when we were sleeping, we heard multiple barred owls. Most of us liked falling asleep to the noises they were making.

The ride on the boat, Loni Carol II, to Port Isobel Island, near Tangier Island in the Bay, was nice and windy.

We set out crab pots—kissing the fish, twisting it in half, and putting it in the pot (it's called "the kiss and twist"). It felt like we were fishing forever. The thing about being on the island of Port Isobel, is that we're on "Island Time." That's when we never really check the time, and events come and go. "It's free-spirited, non-planned, and can be spur-of-the-moment," fellow student Anna Pauletta said. Abby Hebenton liked it, "because I don't want to be forced to follow set plans if it doesn't make sense in the conditions."

I'm on "Island Time" right now, so I don't know what time it is. I woke up to watch the sunrise. I love these CBF trips because we are in a different environment, so we get to observe new things. I went back to bed, but by 7 a.m. the CBF staff was blaring a "Lion King" song to wake us up. After breakfast, we went marsh mucking. We had two layers on and it was super hot. It did feel nice wading in the water though.

On Tangier Island, we walked to the museum and learned island history. It was interesting to compare how things were back then, to now. It was hot so we got ice cream from a place called Four Brothers. There were golf carts everywhere because that's the easiest way to get around. Then we picked up the crab pots that we set the day before. We caught a lot of crabs! After dinner, which Abby, Anna, Mary Martin, and I made, we dug into the Old Bay covered crabs. They were so good, and Isaiah McCready, a student who lives on Tangier, taught us the best ways to crack them open. Afterwards, we went on a nighttime walk. It was pitch black, but really cool.

More people got up for the sunrise. We went up to the dock to watch, and it was very pretty.

We filled out two pages of a Port Isobel book. Everyone that stays on the island gets to fill out a few pages. On the boat ride back we jammed to some music.

At the Philip Merrill Center in Annapolis, we worked on our display board for Saturday. It was raining, dark, scary, and stormy. Some people here love thunderstorms. I'm not a fan at all, and was moderately shaken up.

At the culminating event at the Merrill Center, students from all the week-long courses from across the watershed came together. We prepared a presentation of our trip with photos and artifacts. Guests gallery-walked through our presentations. Many of the folks stopped to ask questions about our experiences from the week.

It was a good day of reflection on all the activities. The closing event was a big hit. A band played for the student leaders and everyone was dancing and having a good time, mingling, and getting to know each other.

The week was the most fun I had all summer. I got so many amazing opportunities and met other student leaders who are interested in the same things I am. Overall, the trip was a total success. I can't wait to see what they have planned for us next year.