This Month on the Bay: Leaf Peeping from the Water in October 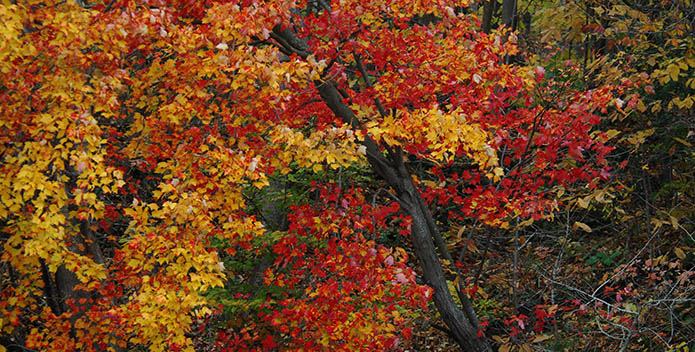 Fall colors on full display around the Bay.

With a drought upon us, it's hard to tell what kind of fall colors we'll find this year, but whatever the weather and the trees give us, the best way to see the colors is from the water, preferably backlit by clear afternoon light. Some of the finest colors will come on lower Bay rivers with cypress trees, especially the Chickahominy, just west of Williamsburg, VA, and the Pocomoke around Snow Hill on MD's Eastern Shore. Bald cypress is a deciduous conifer, so its needles die and drop by December, but as part of that process this month, they turn all sorts of golden, red, and brown heather colors. Those two rivers offer good access points for outboard skiffs, canoes, and kayaks. To get out on the water this season, check out the Captain John Smith Chesapeake Historic Trail.

On those waterways and most others around the Chesapeake, red maples, black gums, sweet gums, sycamores, and other hardwoods along the shores turn colors that range from yellow through flaming red to deep purple. The most stunning visual experience I've ever had on the Chesapeake was a late October afternoon run in my skiff down the Rappahannock from Leedstown toward Tappahannock. In the long reach from Layton's Landing past Wellford's Wharf, the light streamed downriver from behind, setting both sides ablaze with maples, sycamores, black gums, and sweet gums before lighting the tawny bare spots on the mile-long swath of Fones Cliffs that was visible. The colors were so strong that I stopped the boat, turned off the engine, and drifted, just looking. The river was quiet, with no other boats. One of the river's bald eagles appeared and drifted down like a huge leaf to a bare osprey platform set on a shoal on the north side of the channel. It was magic.

I have two photographer friends on the Rappahannock who might be able to capture that scene, but I'm glad to have caught it on the digital camera between my ears. Here's wishing the same for you this season.

In the Main Bay

Speaking of empty osprey platforms, our fish hawks have been gone from our waters for about six weeks. Where have they gone? Amazingly, to South America. For the past several years, CBF has maintained a web tracking map for two birds, Holly and Nick, that were tagged with tiny radio transmitters at our Hackett's Point property near the Bay Bridge and our Port Isobel Island Environmental Education Center at Tangier, respectively. What amazing travelers! Keep an eye on them this winter and look for them to return during the first half of March.

Meanwhile, as the ospreys leave, our native strain of Canada geese are migrating in from their nesting grounds on the tundra and muskeg of the Ungava Peninsula in far northeastern Quebec and Labrador. Keep eyes and ears on the sky for their V-shaped flocks and what conservationist Aldo Leopold called Goose Music in his splendid book, A Sand County Almanac.

CBF in Maryland   CBF in Virginia