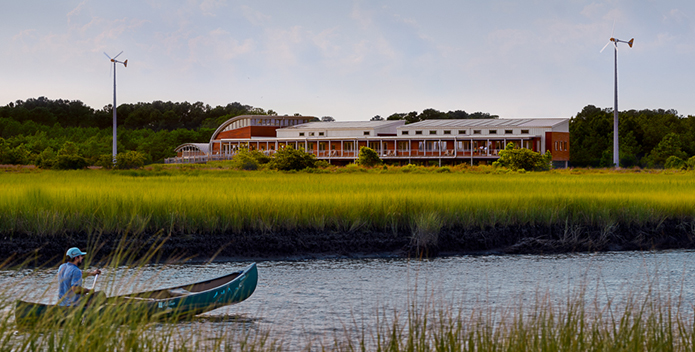 "Over a decade ago, local leaders and CBF formed a vision for a precedent-setting environmental center here in Hampton Roads," said CBF Hampton Roads Director Christy Everett. "It has now exceeded our dreams. What has surprised us the most is just how many people have come to learn what they can do to protect our waterways and environment." 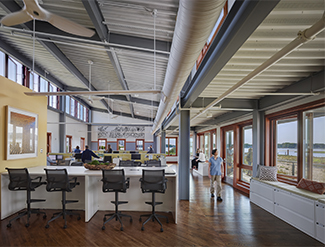 The Brock Environmental Center and surrounding trails and beaches are open to everyone. About 75,000 visitors have come through its doors from 35 different countries, including places as far away as Malaysia, Tanzania, and Papua New Guinea. Numerous elected officials have visited the site for meetings and tours, including Virginia Gov. Terry McAuliffe, Gov.-Elect Ralph Northam, Sen. Tim Kaine, and Reps. Bobby Scott and Scott Taylor.

The building and surrounding marshes, maritime forest, and waterways are also an important teaching tool. More than 5,000 students have participated in environmental education programs at the site. Local organizations frequently use the building as a meeting and gathering space. Last September more than 1,300 members of the community came to the Brock Center to celebrate Save the Bay Family Day.

The Center itself is a model for efficiency. Over the last three years, its solar panels and residential wind turbines have produced nearly 50 percent more energy than the building has used. Composting toilets, permeable pavers, and rain gardens eliminate wastewater and runoff. All of the Center's drinking water comes from rainfall that has been captured and treated—and it's the first commercial building in the continental United States permitted to do so. In fact, this year CBF worked with Pleasure House Brewing to make a rainwater Bohemian pilsner called Rain Barrel: A Bay Saver's Brew. 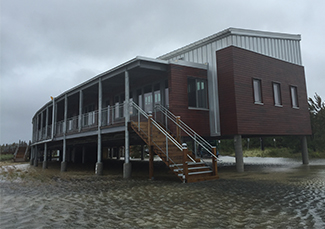 CBF's Brock Environmental Center, which was built tough to withstand storms and sea level rise from climate change, stayed dry when Hurricane Joaquin's floodwaters flowed under the building in October 2015.

Built tough to withstand storms and raised 14 feet above the ground, the Center is coping with climate change in a region increasingly prone to flooding. Its green infrastructure, like living shorelines and rain gardens, helps adapt to sea level rise. The building has stayed dry during numerous floods, including when Hurricane Joaquin's floodwaters flowed under the building in October 2015.

In May 2016 the Brock Center became the tenth site to meet one of the world's strictest building standards—Living Building Challenge certification. It has also earned LEED Platinum Certification and more than 22 building and design awards, including the national Engineering News Record award and the American Institute of Architects COTE Top Ten Award.

"The Brock Center is designed to inspire. Everyone can take something back from their visit to apply to their own lives—whether it's planting a rain garden, installing solar panels, or updating insulation," said CBF Brock Center Manager Chris Gorri. "When you add it all up, the cumulative impact of these small actions becomes huge."

The Center's third anniversary comes at a time of transition as CBF's Vice President of Administration Mary Tod Winchester prepares to retire later this year after 46 years. "Mary Tod was instrumental in making the Brock Environmental Center a reality," said Everett. "She pushes boundaries and facilitates the kind of out-of-the-box thinking that takes green building to a new level. The Brock Center represents years of her hard work, along with the efforts of so many others."