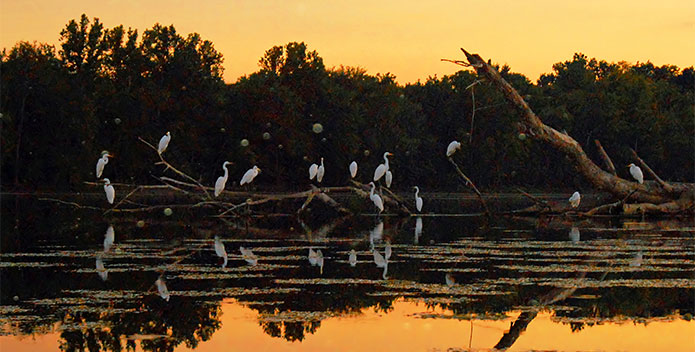 This is a critical time for bay restoration. At the halfway point between 2010 and 2025 the question is: Are we on track?

The blueprint, established in 2010, includes pollution limits, state-specific plans to achieve those limits, two-year milestones to evaluate progress and consequences for failure. The states also committed to have practices in place to achieve 60 percent of the needed reductions by 2017, and to finish the job by 2025.

The CBF's report used information from the Chesapeake Bay Program to assess whether the states achieved the 60 percent goal. We also evaluated the key policies and programs that states were relying on and made recommendations for future priorities.

On the positive side, watershed-wide, the 2017 pollution reduction goals for phosphorus and sediment were achieved and pollution reductions from wastewater treatment plants far exceeded 2017 goals in all three states. On the downside, the nitrogen pollution reduction goal was missed, and Pennsylvania continues to be responsible for most of the shortfall. In addition, reducing polluted runoff from urban and suburban areas is also off track in all of the jurisdictions.

Like other states, Maryland has made progress in reducing pollution from wastewater treatment plants and at this time, this is covering gaps from other sources. Maryland will not be able to rely on wastewater plant upgrades to cover shortfalls at the 2025 deadline.

Maryland is also significantly behind in reducing polluted runoff from urban and suburban areas. None of the state's most populated counties nor Baltimore City have met goals for reducing this pollution, which is established in regulatory permits. To get back on track, Maryland must strengthen the next round of permits, adhere to deadlines and requirements in approving jurisdictions' Financial Assurance Plans, and reduce forest loss from development.

To improve progress in agriculture, Maryland should focus its cost-share investment dollars in targeted areas and on sustainable practices—and restrict the use of funds for new or expanding poultry operations. Maryland also needs to better account and plan for pollution increases from sprawl growth in rural areas as well as an expanding poultry industry.

Virginia has made progress in wastewater and agriculture, but needs to improve stormwater cost-share programs, account for growth in poultry farming, and strengthen urban stormwater permit requirements.

The budget passed by the General Assembly is an important step. It provides funding for agricultural conservation practices and new funding for matching grants to help local jurisdictions, as well as reduce urban and suburban polluted runoff. These funds should be spent cost-effectively to maximize pollution reduction benefits.

In addition, as in Pennsylvania, the implementation of forest riparian buffers has been sluggish and needs to be accelerated. Furthermore, the state needs to re-evaluate its post-construction stormwater criteria for new development and develop an accounting-for-growth framework that considers the expansion of poultry production.

Pennsylvania's cleanup plan established a strategy to achieve agricultural compliance with state regulations on all farms in the Chesapeake watershed by 2017. Overall, progress was lagging until July 2016, when the Pennsylvania Department of Environmental Protection initiated a program to verify that farms at least have the required plans, as well as set a goal to inspect 10 percent of the farms annually.

Since 2016, the DEP and county conservation districts have inspected 15 percent of agricultural land in the state for required sediment and erosion control and manure management plans. About 65 percent of farms inspected had the required plans.

Although the Commonwealth is meeting the commitment to determine that farms have plans, moving forward, the inspection program should begin verifying the implementation of the practices in the plans. With 6,800 miles of streams impaired by agricultural activities, future compliance efforts must transition toward technical assistance and implementation.

In addition, the statewide Keystone 10 Million Trees Partnership, coordinated by the CBF, is expected to have a positive impact on reducing agricultural, urban and suburban pollution by achieving as much as two-thirds of the Blueprint goal of 95,000 acres of forested riparian buffers. But Pennsylvania continues to be challenged by inadequate federal and state investments to clean and protect its rivers and streams.

The effectiveness of these efforts should benefit from the DEP's proposed approach of targeting time and resources in counties and watersheds that are delivering the most pollution to local waters and the Chesapeake Bay.

The Bay jurisdictions are starting to work on the third iteration of their cleanup plans that will describe actions between now and 2025. These plans must be detailed and comprehensive—and address existing shortfalls.

Developing local pollution-reduction goals and ensuring robust outreach efforts is critical, as are efforts to prioritize and target resources to maximize cost-efficiency.

In addition, the Bay jurisdictions should start planning now for the impacts of climate change—both in terms of the potential for additional pollution reductions and the prioritization of practices that will yield multiple benefits, including greenhouse gas reduction and climate resiliency.

The Chesapeake Clean Water Blueprint is working. The dead zone is getting smaller, Bay grasses set a new record last year, and the Bay's oyster population is recovering. It is time to develop and implement plans that will finish the job.