This Month on the Bay: Late Summer Glory in Tidal Fresh Marshes 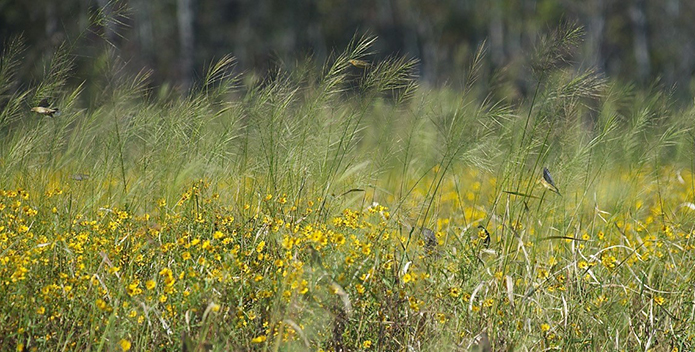 Rice and butterweed in a tidal fresh marsh.

Tidal Fresh sounds like an oxymoron. If a waterway is tidal, its bottom must be below sea level and open to the ocean, so it should be salty. Right? Nope. Nature doesn't always fit into neat human categories. Consider the Chesapeake's major rivers. From the largest of all, the Susquehanna, to a smaller one like the Piankatank, they drain rainfall from significant acreages of land, and as that fresh water flows downhill, it overwhelms and pushes back the inflow of salty water from the Atlantic for at least a portion of the waterway's tidal basin.

How much this phenomenon occurs varies greatly from day to day, month to month, and year to year, according to weather conditions, and the details can get complicated. But every one of the Chesapeake's rivers has an upstream tidal section where the prevailing salinity is less than three parts per thousand (about one-tenth of seawater), the general criterion for classifying it as fresh. On a large river like the Rappahannock or the Choptank, the tidal fresh section may extend for several dozen miles, while on a short river like the Severn, it may be restricted to tiny pockets in marshes at the heads of creeks. 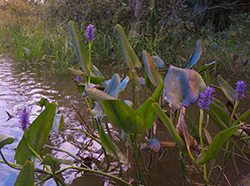 Whichever the case, the Chesapeake's tidal fresh rivers and creeks are magical places from early August to late September, as the plants in their marshes mature. Unlike salt marshes, whose species diversity is limited to a few plants that can deal with salt water around their roots and in their body tissues, our tidal fresh marshes typically contain several dozen species. The outer edges often grow broad-leaved yellow pond lily (Tuckahoe), arrow arum, or pickerelweed. The latter is growing finger-shaped blue flowers right now, blooms that will last through September.

On higher marsh soil, the dominant plants now are 5-8-foot-tall stands of wild rice. This amazing grass is an annual, propagating by dropping its well-loved grains when the seed heads "shatter" late this month and in the first half of September (though some will mature later—I've seen ripe seed heads as late as early November on the James River's beautiful Chickahominy tributary). Note the height of the rice. The plant accomplishes that in about five months, growing from grains shattered in previous late summers. Do the math: that's half-an-inch a day. 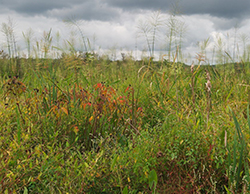 And the profusion of grains does more than just ensure more rice in succeeding years. They are just as nutritious for birds as they are for humans. If you're exploring tidal fresh reaches of our rivers in September and October, you'll see and hear plenty of blackbirds, bobolinks, sora rails, and waterfowl piling into the marshes to feed. The rice gives then valuable calories and proteins to help them endure the winter.

Rice is not the only seed producer in tidal fresh marshes at this season. In fact, most of the plants are annuals. Although they appear inconspicuous, the greatest quantity of nutritious seeds come from members of the buckwheat family, including dotted smartweed and tearthumb. Add in rice cutgrass and Walters millet, and, in September, bright golden carpets of tickseed sunflower (called butterweed by old river people on the Patuxent). These marshes are veritable waterfowl food factories, producing wildlife nutrition literally by the ton. 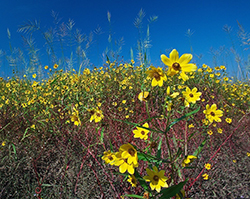 Butterweed in the foreground with wild rice in the background.

Come October, these annual plants will begin to die, having done their job of procreating, and by early November, their marshes will be reduced to stubble. Even then, though, they contribute to their river ecosystems. If you're out then, look closely at the water and the soil along the edges of the marshes. You'll be amazed at how many seeds you find. No wonder there are enough to feed birds and still produce that lush growth next year. And even the dead tissues of the rice, pickerelweed, smartweed, and butterweed plants will enter the river's food web. As weather, bacteria, and fungi break them down, they will form a remarkably rich vegetable stew that feeds tiny crustaceans and fish, which in turn feed the river's turtles, water snakes, larger fish, great blue herons, river otters, and even us. No oxymoron here. Just more of the Chesapeake's riches for us to explore and learn to love.