The Legend of John Page Williams 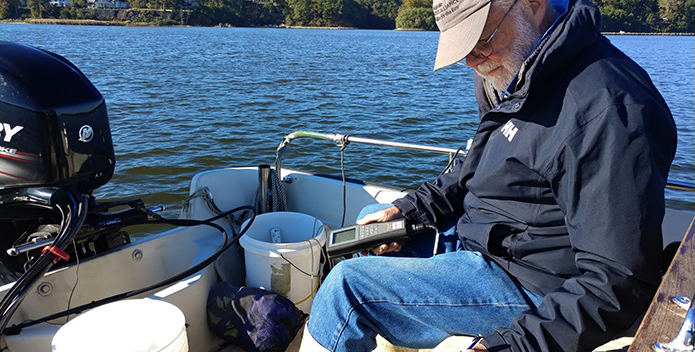 After 46 years of tirelessly working for the Chesapeake Bay Foundation, John Page is hanging up his CBF waders this month.

Earlier this month, many gathered at CBF headquarters in Annapolis to celebrate the legend that is John Page Williams. After 46 years of tirelessly working for the Chesapeake Bay Foundation, John Page is hanging up his CBF waders this month. His unrelenting work has been instrumental in restoring and protecting the local waters, economy, and community since 1973. We couldn't be more grateful for this extraordinary naturalist, storyteller, and educator, and his life-long commitment to the Chesapeake and its waters. Below find an excerpt from a speech given by CBF's former Director of Fisheries Bill Goldsborough the evening of John Page's farewell.

CBF once described John Page as "fish obsessed since he was four years old." As someone with a mild interest in fish myself, I can attest that his obsession puts all others to shame.

And while being obsessed with fish usually leads to attempts to have them in hand, as it were (and we'll get to that), I would suggest that, perhaps to an even greater degree, he is obsessed with talking about fish . . . and crabs and oysters and, especially, their unique habitat here in Chesapeake Bay. In short, he talks about fish as a way to stimulate interest in the Bay. It is his forte, his genius.

Just as an example, imagine a Virginia gentleman convincing a Yankee farmer that he ought to care about a scaly critter hundreds of miles downstream—he’s done that . . . while probably extracting inside information about local brook trout fishing.

How many of you are familiar with the long-running program on WRNR called Voices of the Chesapeake? And how many of  you know that John Page was the very first interview in that series? And that host Michael Buckley called him the "spark that lifted the whole project?" Not surprising is it?

In that interview he told one of his favorite stories—about how, unlike all other Bay tributaries, Native Americans gave a special name to the tidal portion of the Susquehanna River, calling it, of course, “Chesapeake” or Great Shellfish Bay. Did you hear the word “fish” in there?

. . . John Page certainly embraced CBF founder Arthur Sherwood's gospel that the best place to teach people about the Bay was on the Bay. In fact, he dedicated himself to the concept so thoroughly that he made an art form out of taking people out on the water in small boats—he even wrote a "how-to" book about it!

Which brings us to the legend of John Page Williams and his unerring talent at finding "work" reasons for taking people out on the water. There they would test the water, determine its salinity, measure its turbidity, sample its biota. Anyone who has seen his boat knows about his genius for meticulously stowing, easily within reach, every manner of sampling gear. But inevitably his passengers found themselves deploying the essential "nekton probe"—a long pole with a line that goes into the water for sampling the nekton, or those things that swim in the water. Now, some of you might think this sounds like a fishing rod, but that would indicate a lack of understanding of the nuances of experiencing the Bay.

Back on land, of course, as his passengers talked about their experience, some people would get the wrong idea. Now, John Page, never one to shy away from a conversation, would often take these misunderstandings head-on by joking that he had perfected the art of "fishing on company time."

And THAT, ladies and gentlemen, is why he is my personal hero.

…and I guarantee you, whether they caught fish or not, every one of the thousands of people he has taken out on the water in his life will never forget it.

Listen to our podcast, Chesapeake Almanac, for weekly insights by Williams into activity throughout the Chesapeake, season by season.