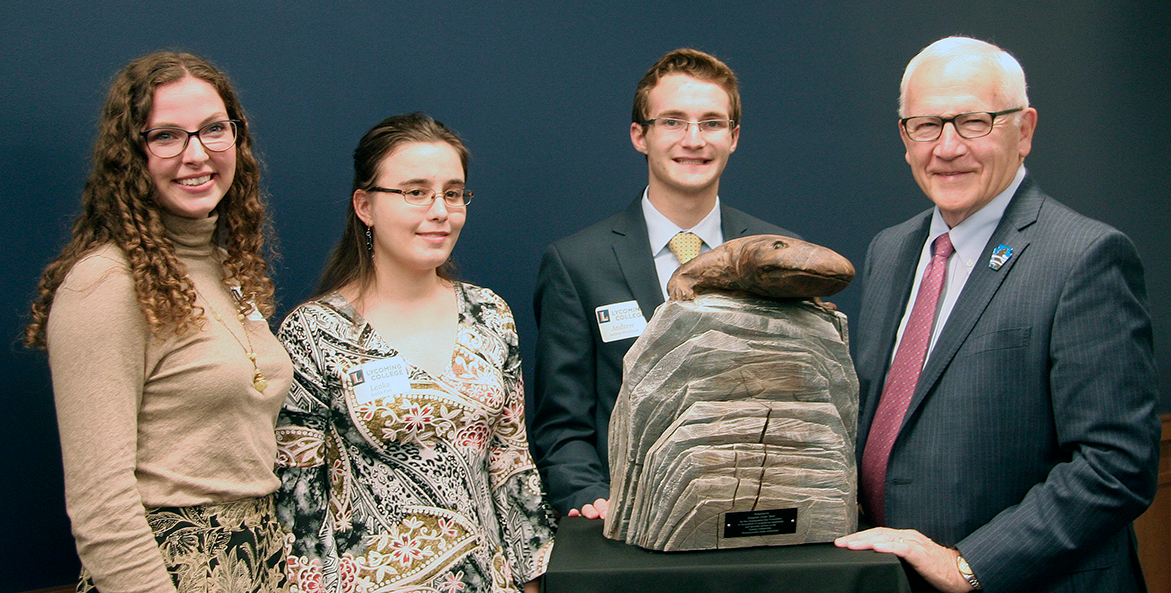 To honor Senator Yaw and his help in designating the Eastern hellbender as Pennsylvania's state amphibian, students presented him a one-of-a-kind wood-carving of a hellbender

Chesapeake Bay Foundation (CBF) student leaders went to Williamsport to celebrate the salamander that is Pennsylvania’s new official state amphibian and to salute the state senator whose support was key to making it happen.

Working together, CBF’s Student Leadership Council (SLC) and Senator Gene Yaw (R-Lycoming) were able to have the Eastern hellbender designated as the Commonwealth’s state amphibian.

“Senator Yaw showed us how we could make an impact,” current SLC President and Halifax Area High School senior Lenka Platt said during the tribute to the senator at Lycoming College. “Sitting at Senator Yaw’s table, he acknowledged that what we believe in matters and that we have the power to create change.”

Students spearheaded the campaign to recognize North America’s largest salamander and create greater awareness of the critical need to reduce pollution in Pennsylvania’s rivers and streams. Hellbenders are an indicator species for clean water. They survive where there is cold, clear, swift-running water.

Senate Bill 9 was passed overwhelmingly by the Senate and House earlier this year and the hellbender bill signed into law by Governor Tom Wolf on April 23.

Emma Stone is former president of the SLC and was involved in the effort from its early days in 2016. “From the beginning, Senator Yaw saw the importance of the designation and recognized the value of it, not only with regards for youth involvement but also for a legacy of clean water in Pennsylvania,” the Carlisle Area High School graduate said. She now attends Mansfield University.

“It’s a pleasure for me and a real honor,” Senator Yaw said of the experience of working with the students. “The look on your faces in the pictures and the number of you that were in my office when it started, to see the whole thing through and then see the governor sign it. And now say we started this from scratch and now we have a symbol for the next hundred years. It’s gonna be there. That’s a really special accomplishment on your part and an honor for me to participate just a little bit.”

Much of the research behind the designation campaign was gleaned from Dr. Petokas and the CWI, directed by Dr. Mel Zimmerman. A lack of streamside trees along Commonwealth waterways allows waters to warm, polluted runoff to enter rivers and streams, and silt to build up in streambeds. As a result, habitat for hellbenders has been degraded and hellbender numbers have been decimated in streams where they were plentiful as recently as 1990.

“Through combining knowledge with passion and tenacity, these student leaders leave a legacy for generations of young people in the Commonwealth to learn about this unique, sentinel species found only in our state’s most pristine waters,” Harry Campbell, CBF executive director in Pennsylvania said.

To honor Senator Yaw, the students presented him a one-of-a-kind wood-carving of a hellbender. Lycoming College president Kent Trachte presented a framed certificate to the Senator, who is a 1970 graduate of the college.

CBF’s Student Leadership Program is open to high school students and is designed to give them a voice and an active role in clean water efforts in Pennsylvania.

“Through everything that went into the hellbender bill, we have educated our peers and communities, we have worked side by side with our elected officials, and we have learned that our student voices are powerful and can create real change,” Lenka Platt added. “As students, it is our responsibility to make sure that the world we grow up in is the world we want and the world that we need.”