This Month on the Bay: Skunk Cabbage are the Bay’s Bouquet 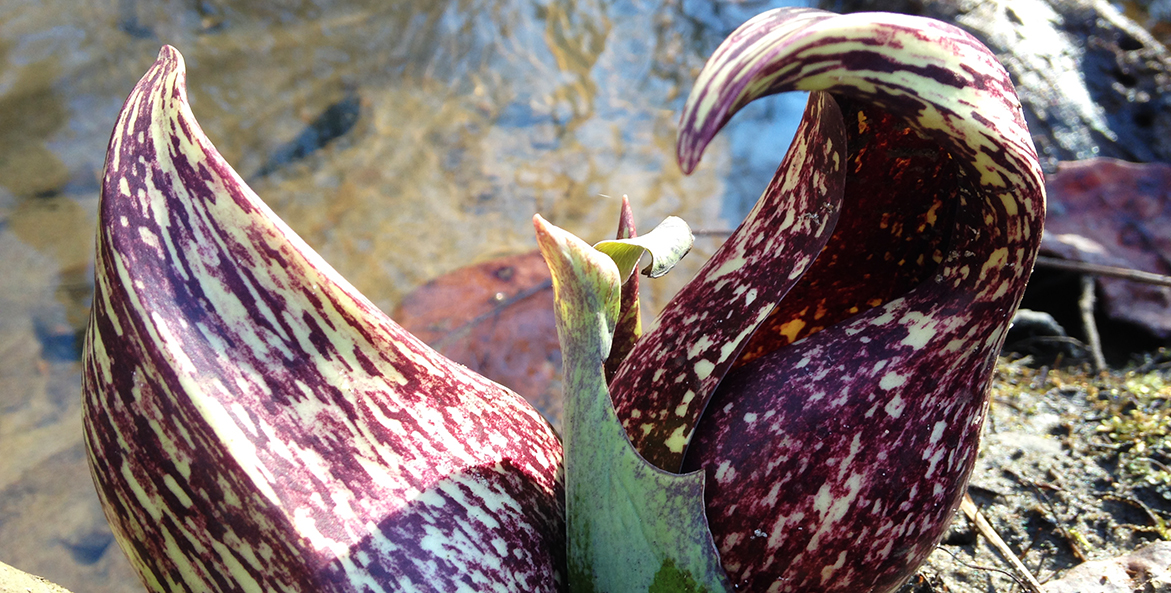 An eastern skunk cabbage sprouts in early February along a tributary of Harness Creek near Annapolis, Maryland.

An ode to mud puddles and odiferous plants.

There's nothing quite like the joy of traipsing through the woods in early spring to find a good creek.

As a kid, it was always a momentous day when I could first kick off the snow boots and lace up the sneakers. I ran up and down our road just for the heck of it. Ice still crinkled the edges of puddles and lumps of snow still hunkered in the fields, but the sun was out, the air smelled green, and my legs—I'm convinced—could fly. Without fail, they'd take me to the nearest bit of mud and water.

At some point we decide it's proper and adult to stop poking around mud puddles. We brush off our knees and forget the last time we turned a somersault. It's nonsense. But no matter—a hearty antidote is easily found this time of year. 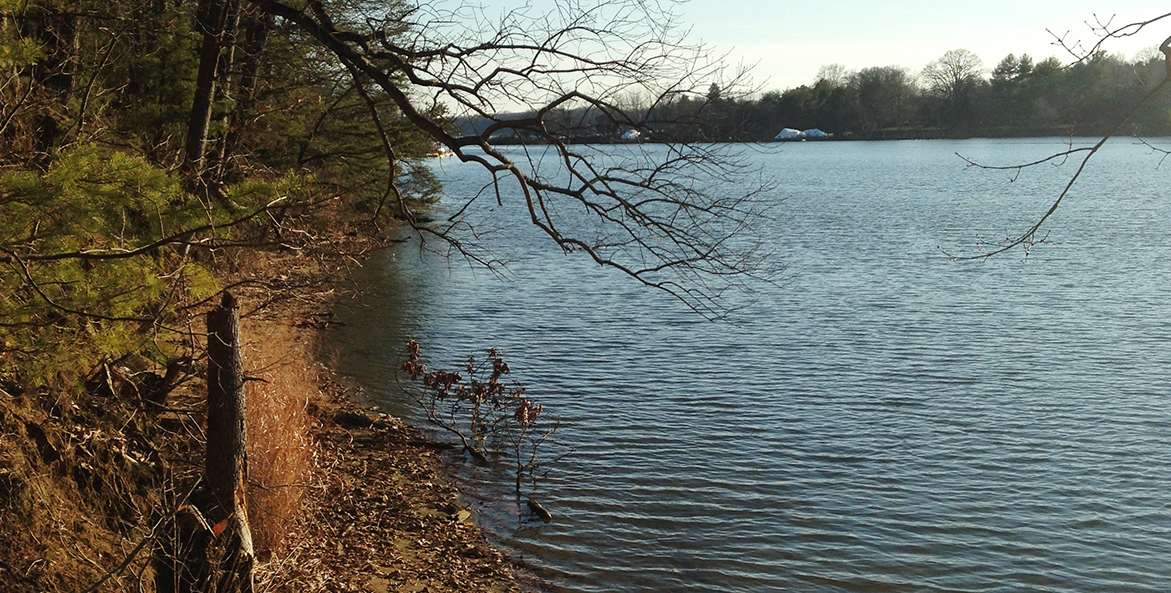 Harness Creek flows into the South River near Annapolis, Maryland, not far from the Chesapeake Bay.

The magnificent, malodorous skunk cabbage is itself a big fan of mud and water, and the search for this early bloomer is an invitation to revel in the Chesapeake's many creeks and crannies.

Eastern skunk cabbage—Symplocarpus foetidus—is found in all of the Bay watershed states. It prefers its feet wet, seeking out streambanks and marshlands, swamps and spring seeps. In fact, it is one of thousands of plant species included on the National Wetland Plant List, which is used to determine the boundaries of wetlands under the Clean Water Act and for conservation programs in the federal Farm Bill.

One of the first wildflowers to appear in spring, it's thick, waxy hood, called a spathe, emerges from the ground as early as January. It can do so thanks to an adaptation that allows the plant to actually heat the soil around it, even melting snow. The heat is an additional incentive to the beetles and flies that visit the skunk cabbage, enticed by its namesake odor to pollinate the spiky cluster of flowers tucked inside. 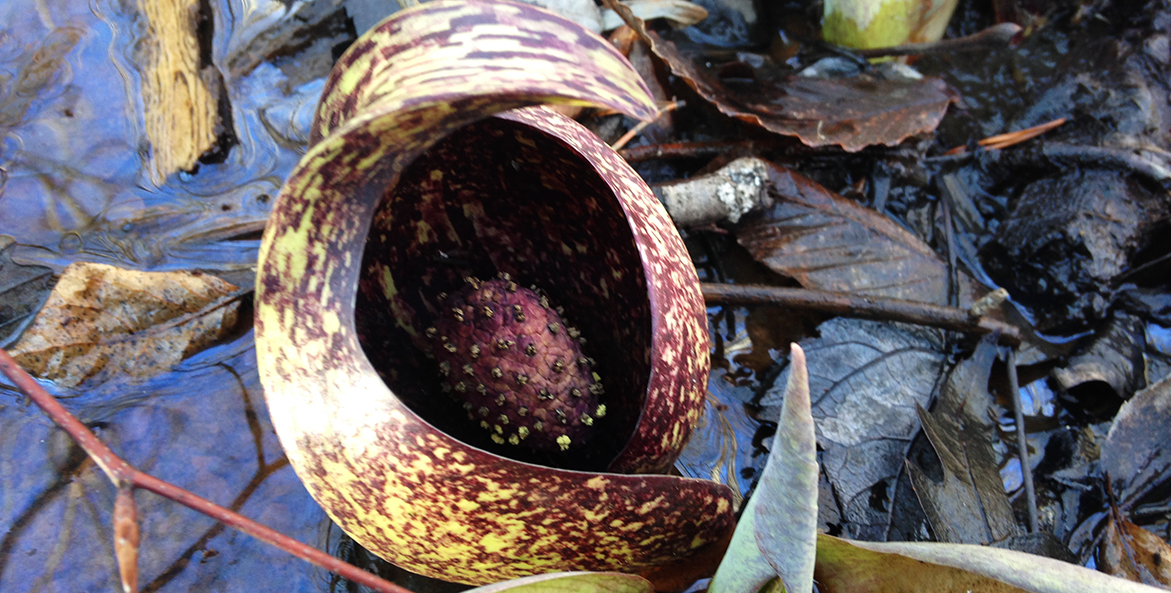 A fleshy, modified leaf called a spathe forms a hood that protects the flowers of the eastern skunk cabbage. One of the earliest wildflowers to emerge in spring, the rotting smell attracts beetles and flies as pollinators.

The bulbous, mottled red and green hoods are easy to miss at first glance. Tucked close to the ground to blend into the mud and forest detritus, they lack the showiness of fellow members of the Arum family, which includes calla lilies and Jack-in-the-pulpit.

But look again and they begin to appear with startling abundance. Hopping around a stream at Quiet Waters Park in Annapolis, near Harness Creek, it became an irresistible hunt. I would crouch to examine one cabbage only to spot an even more luxuriant specimen preening just feet away along the bank. 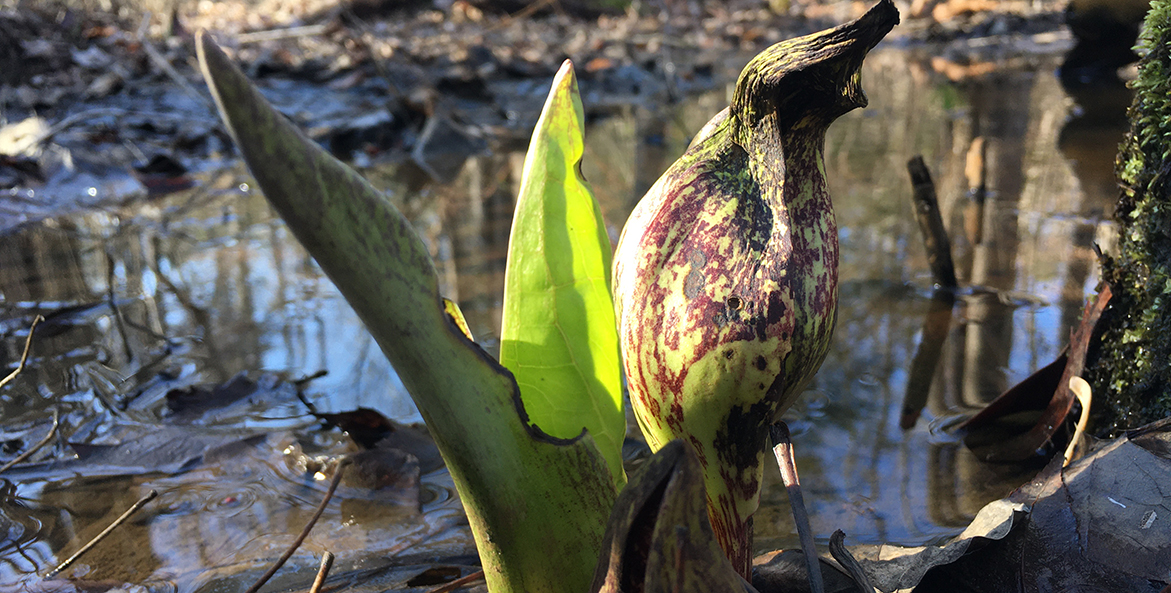 Large leaves replace the flowers of the skunk cabbage, marking streams and wetland areas in bright green as spring progresses.

By next month, the large, bright green leaves will emerge, unmistakably marking the course of a stream or wetland through the forest. Other wildflowers will arrive to steal the show. But for now, the skunk cabbage are basking in all the rainy, sloppy glory of February.

So this month, resist the thrall of gray skies and gloominess. Get outside! Find the skunk cabbage!