The Day the Ladybugs Moved In 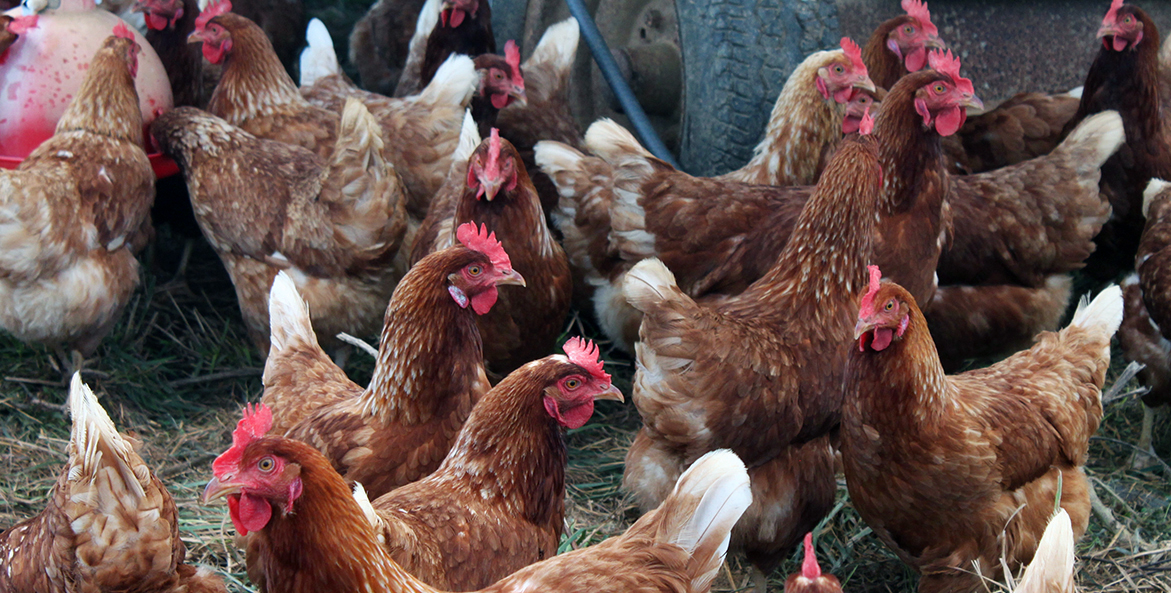 On their farm in Frederick County, Maryland, MK and Andrew Barnet are working to restore the soil, the water, and the planet—all in the name of good food and good life.

The aphids were on the attack. Despite her best efforts to keep them at bay, MK Barnet found the tiny insects covering the eggplant crop at Open Book Farm, where she and her husband, Andrew, grow organic vegetables and raise grass-fed poultry and livestock. 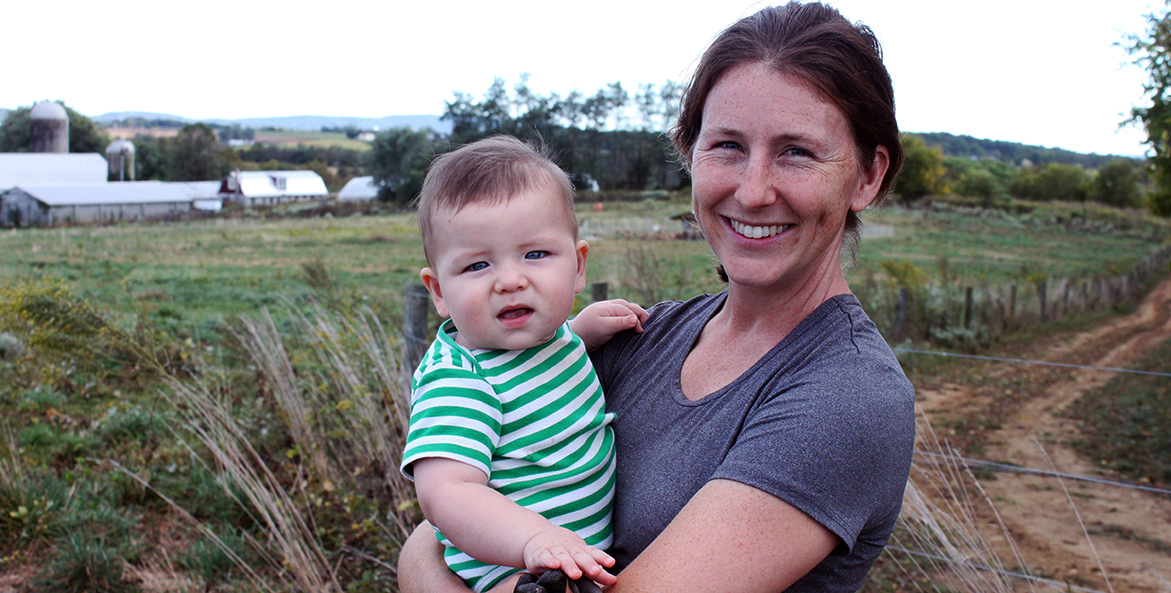 Conventional insecticide sprays aren't an option for organic farmers. "If you have a pest infestation, you have to figure out ways to deal with it," says MK. She resolved to order some ladybugs instead. The beetles are natural predators for aphids, each capable of devouring as many as 5,000 of the sapsucking pests in their lifetime.

But before she could, something rather magical happened. Somebody—or rather, thousands of somebodies—beat her to it.

"About a week later, I went in and the ladybug population of our farm had moved in," she remembers. "The plants were covered, you could see it from a distance. They ate all of the aphids; it was so cool."

Farming in a way that builds a functioning ecosystem from the ground up is known as regenerative agriculture. The goal is not only to farm sustainably, but to actually improve the quality of the soil and water that grows our food. In return, the environment provides natural services—like pest control and water retention—that help farmers.

Regenerative agriculture holds significant promise for tackling two urgent threats to the Chesapeake Bay: nutrient pollution and climate change. Practices like rotational grazing and planting streamside tree buffers reduce the amount of pollution flowing off farmland into nearby rivers and streams. At the same time, they trap significant amounts of carbon-rich organic material in the soil, which reduces climate-warming emissions and makes the land more resilient to extreme droughts and storms.

MK and Andrew see the changes on their own farm. Since beginning to progressively take over the land from a former dairy operation in 2015, they have worked to convert the conventional corn and soybean fields into organic vegetable beds and rotationally grazed pastures. 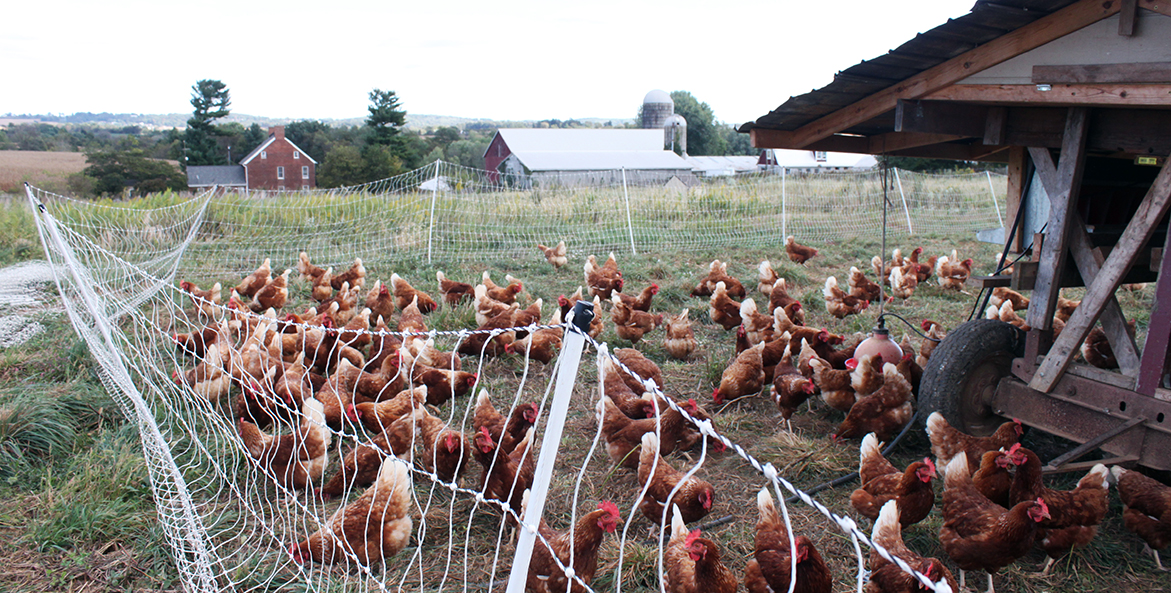 They now raise as many as 6,000 broiler chickens, 150 laying hens, 100 turkeys, 10 beef steers, and 20 pigs each year, in addition to vegetable crops. Between May and Thanksgiving, they sell their products at farmers markets, through community supported agriculture (CSA) shares, and directly from the farm. They also sell their chicken wholesale to the Common Market Coop in Frederick and offer a winter CSA share for vegetables, eggs, and meat.

"For both of us, we really love doing physical work, but we wanted to feel like it was meaningful in an environmental way, as well," says MK.

They began by reseeding the fields with pasture grasses and planted cover crops where they planned to grow vegetables. Both helped improve the soil. The second year, they planted trees to buffer the stream that runs through one corner of the farm. Then they built fencing and installed water lines, which allowed them to move their livestock frequently between pastures—a practice known as rotational grazing.

The work was almost entirely funded through the U.S. Department of Agriculture's Natural Resources Conservation Service (NRCS) and CBF.

"The two have worked together really synergistically," says MK.

As a result, the amount of nitrogen and phosphorus running off the land into nearby streams dropped 60 percent, according to scientific models CBF used to assess the on-farm changes. Greenhouse gas emissions fell 43 percent—an amount equivalent to the carbon stored annually by nearly 2 acres of mature forest. 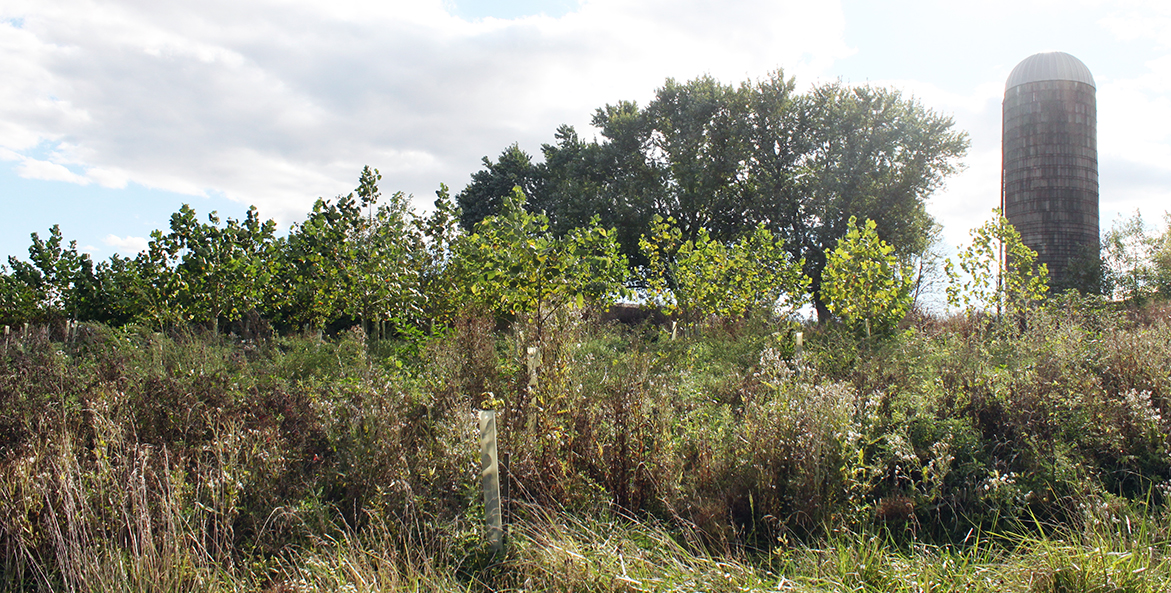 Riparian buffers on Open Book Farm in Frederick County, Maryland help keep pollution out of rivers and streams as well as provide important habitat for wildlife.

"It's hard to compare a piece of ground, in your mind, to how it was four years ago. But what we can do is walk up to the border of the part of our farm that is still being row-cropped," says MK. "Especially in the spring, on one side you have this lush pasture that is so diverse and so alive, and then you literally hit a line and just see bare, dead ground."

But the biggest changes she's noticed are the sights and sounds from the farmhouse porch.

"I feel like we see so much more birdlife, which is really neat," she says. "We have this big riparian buffer planting, we have lots of pastures that have tall grass, it's lots of habitat."

"Frankly, Open Book Farm needs to be the model for farms in the future," he says.