A Veritable Force of Nature 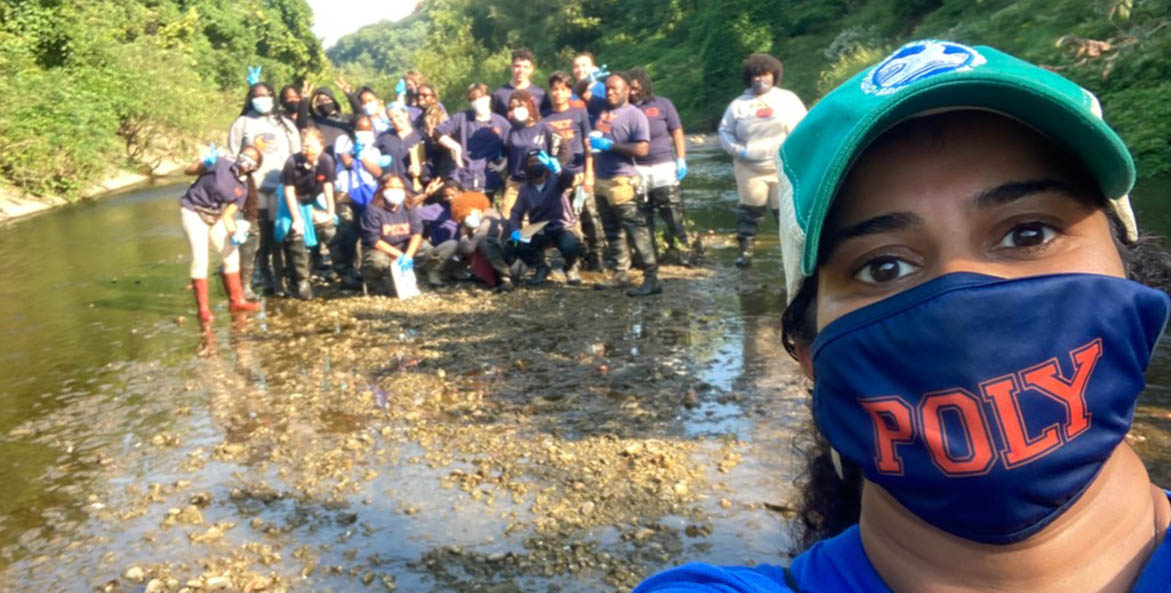 CBF mentor teacher Vicki Mathew is a veritable force of nature. Equally committed to environmental education and environmental justice, she has worked tirelessly—and quickly—to transform Baltimore Polytechnic Institute into a model of both.

Mathew is in her fifth year teaching biology at the prestigious magnet high school for science, technology, engineering, and math. But to inspire students and teachers alike, she draws on more than 13 years teaching science in Baltimore City public schools and 10 summers taking or teaching one of CBF's Chesapeake Classrooms professional development courses. The last eight years she has also mentored other teachers as a member of CBF's Teacher Environmental Literacy Leaders (TELL) network.

Mathew attended her first CBF professional development course in 2009 and has been hooked ever since. In eight years as a TELL mentor, her enthusiasm for outdoor education has gotten lots more teachers hooked. Since she began teaching biology at Poly in 2017, nearly all of the high school's 17 science teachers have taken at least one Chesapeake Classroom course she taught or mentored and used their training to carry out MWEEs with their students.

But her first year at Poly, she was one of only two teachers taking students outside for hands-on, in-depth learning about the Bay as an integral part of her curriculum. Mathew got 36 freshman biology students to learn outside during the 2017-2018 school year.

Back then, not many students joined Poly's environmental clubs either. And despite the 1,550-member student body being 75 percent Black, green club members were most "kids from upper-class, rich, white neighborhoods" who went to the same exclusive feeder schools for the magnet program and join clubs together, she said.

Mathew said club members recognized and wanted to change the lack of diversity, but needed an adult to help them reach the entire school community. As a person of color, Mathew said she was in the best position to do that. So last year she spearheaded a schoolwide conversation among faculty, administrators, students, and even alumni about environmental justice and how Poly could be more inclusive.

She also urged the school administration to hold a club fair so all students could learn about the many clubs open to them. Only one year later, green club membership at Poly "is more diverse than it's ever been," she said.

The conversation about inclusiveness, plus her work mentoring two Baltimore City biology teachers last summer, enabled Mathew to achieve her most ambitious goal, expanding outdoor education about the Bay watershed to all freshmen Poly.

If all freshmen do MWEEs going forward, ultimately thousands of Poly students will get the chance to connect with nature, reap the benefits of outdoor education, and be inspired to join one the Poly's many green clubs, she said.

Whether that happens will be up to the students and teachers she has inspired, not Mathew. Next year she's taking a 10-month sabbatical to pursue conservation projects in the Arctic, India, and Tanzania, where she began her teaching career as a Peace Corps volunteer from 2003 to 2005.

But no matter what the future brings, Mathew said it won't dim her commitment to outdoor learning in the watershed. "I always want to be with CBF. As long as they'll have me, I want to be a mentor."

Educate   Women's History and the Bay