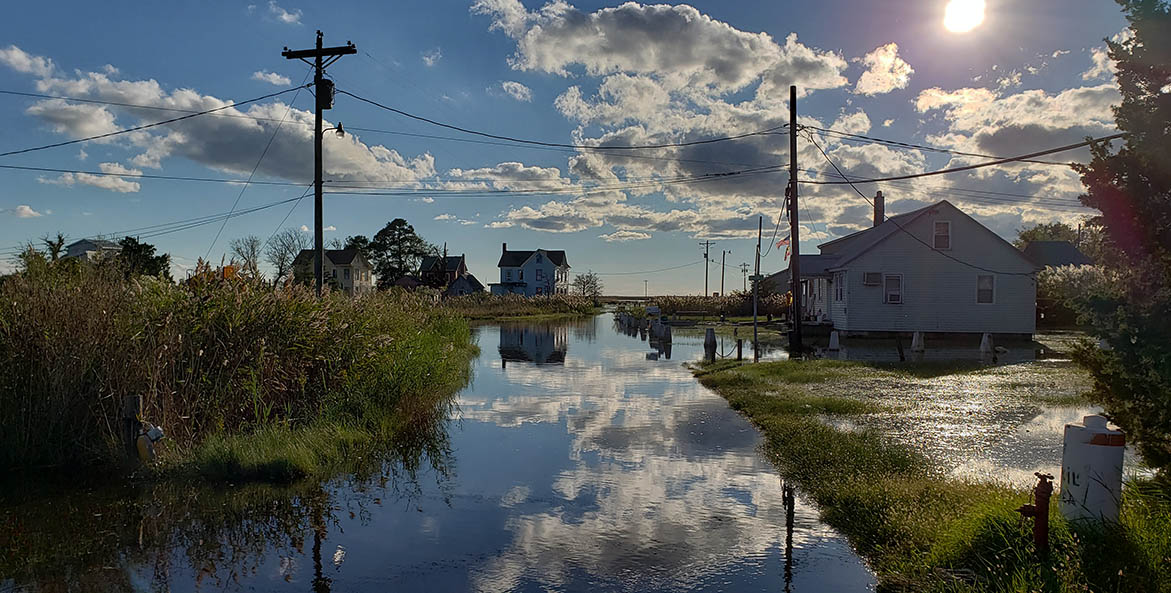 How we adapt our built infrastructure to the challenge of sea level rise is at the forefront of climate change discussions, especially in the Chesapeake Bay region.

A recent Bay Journal article, though, Can makeover save Annapolis City Dock from sea level rise?, left out several major ways to avoid the mistakes of the past. To do so, we must consider remaking flood-prone areas in the Bay region with natural solutions that will mitigate climate change and benefit the environment.

The article focused on one plan that calls for raising the walkways around the dock, building a new flood wall and installing some sort of transparent or retractable sea wall. Pumps would also be needed to remove runoff trapped behind the new sea wall. The total cost? At least $50 million.

The article notes that the money could come from the state or by raising taxes. But no one is quite sure how Annapolis or Anne Arundel County would pay for such an expense. It also didn't explore whether the bulk of the taxpaying public, who don't live in flood-prone areas, would support using these funds to preserve the current look of the waterfront.

The primary theme throughout the piece was preservation: preserving the look of City Dock, its waterfront buildings and walkways, and its parking capacity.

In many cases, including downtown Annapolis, preservation in place may be impossible or, at the very least, only a temporary solution. Our coastal landscape is going to look drastically different. The choice is either to work with nature or to react after it works us over. Reacting will be far more expensive and likely futile.

Climate change is causing sea levels to rise. Even in the best-case scenario, in which we drastically reduce greenhouse gas emissions quickly, Annapolis sea levels are predicted to rise an average of 1.5 feet by 2050 and 3 feet by 2100, according to a 2018 study by the University of Maryland Center for Environmental Science. If emissions aren't reduced, and so far they have not been, sea levels could rise by nearly 8 feet in our region by the end of the century.

Stronger storms caused by warming ocean temperatures and changing weather patterns are an even greater threat. The remnants of Hurricane Isabel in 2003 produced a storm surge of 7.2 feet in Annapolis and 8.2 feet in Baltimore. The UMCES study noted that given ongoing sea level rise, if a category 2 hurricane today were to follow the path of Isabel it would result in a storm surge of nearly 11 feet in Baltimore. One could deduce that the surge in Annapolis from such a storm would easily topple the proposed 8-foot-high retractable sea wall, swamping downtown for days.

And for those who don't remember Isabel, the recent damage done by Hurricane Ida underscores the vulnerability of urban areas to extreme weather, especially in places like Annapolis, where high tides and heavy rainfall work together to cause urban flooding.

Just as dire, the scientists noted that further hardening the shorelines around the Bay—such as by building higher bulkheads or sea walls—"would have the effect of increasing storm surge height in Baltimore and elsewhere around Maryland's shores." Displaced water must go somewhere.

By building higher sea walls, we'd be creating worse situations in neighboring areas that are threatened by sea level rise but lack the resources to keep up in the shoreline-hardening arms race. And while high-value commercial areas may be able to be protected using vast sums of taxpayer money, it will be far more difficult and expensive to insulate the surrounding roads, pipes and utilities needed to keep those areas vibrant.

We must begin to come to terms with the reality that we can't save the coastline as it currently exists. We need to prioritize natural adaptation, but planned abandonment should be considered as well.

Rather than build ever higher walls and rip rap monuments, we should be developing strategies for moving the human footprint away from the shore—while also looking for ways to restore wetlands, add trees along shorelines, diversify urban landscapes and encourage the growth of wave-attenuating marsh grasses. These natural systems absorb the energy of storms while also reducing storm surges and runoff. The improvements also benefit water quality, increase habitat for animals and beautify communities.

A re-imagined City Dock with marshes extending around it, more trees, green infrastructure on buildings, and natural shorelines would serve as a model for coastal communities around the world on how to responsibly adapt a historic town to climate change.

Maryland has a vehicle to get this work done—the 2020 state law shepherded by State Sen. Sarah Elfreth that enables cities and counties to establish finance authorities that can issue bonds for climate resilience projects. The question is whether there will be the political will and public support to alter our landscape in a way that may seem radical compared to pumps and higher flood walls, but will protect our sensitive coastal areas, and us, in the long term.