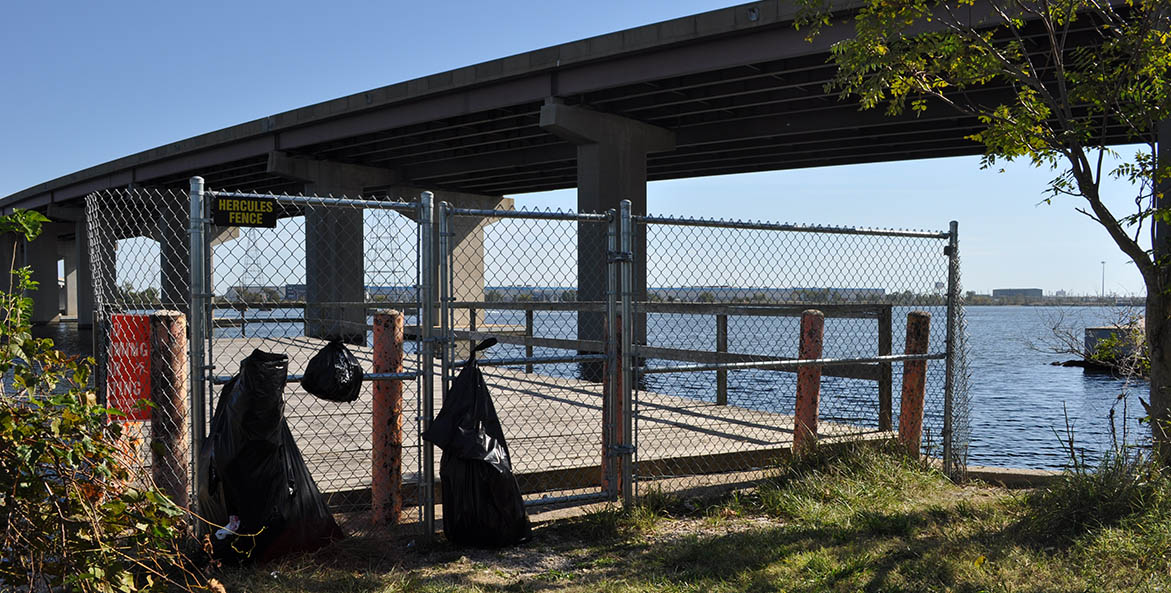 The community pier at Fleming Park in Turner Station is blocked off from fishing or swimming activities.

The following was first published on Green 2.0.

Pollution has been a persistent part of life in Turner Station, Maryland.

The historically African-American community is surrounded by a former steel production plant, gas power plant, landfill, and an interstate.

"It has affected our recreation, quality of life, and health," said Gloria Nelson, President of Turner Station Conservation Teams, an advocacy organization for the Turner Station neighborhood, which sits across Bear Creek from the former Bethlehem Steel Plant, just 20 minutes east of Baltimore. "Turner Station used to have a beach. But because of the contaminants it had to close. We had residents coming out of the water bleeding, with sores. We've had high rates of cancer and respiratory conditions.

The community is an emblematic example of environmental injustice—a working-class community burdened by legacy pollutants concentrated in one area and little to no accountability for those responsible for introducing those pollutants. Fleming Beach is an example of that injustice—the Turner Station Recreational Council opened it in 1964 for the enjoyment of the community. The next year it was closed permanently after swimmers suffered eye and ear infections as well as lesions due to steel mill pollutants contaminating the water. To this day, there are signs along the shoreline advising against swimming or fishing in the water.

But today, progress is being made to correct the pollution problems that remain.

This year the Environmental Protection Agency announced it's considering designating the area around the former Betlehem Steel Mill at Sparrows Point as a Superfund site. The designation could bring millions of federal dollars to remediate legacy pollution. The cleanup would take place in about 60 acres of Bear Creek and the Patapsco River, which border the former steel plant that sits across the Patapsco from Turner Station. EPA is taking public comment on the proposal until Nov. 8.

To community members, it represents a step forward in their efforts to fix the legacy pollution issues.

"As a historically black community, we have suffered," Nelson said. "We just hope that EPA will get approved for this cleanup."

Chesapeake Bay Foundation (CBF), has partnered with residents in these efforts. CBF is encouraging members of the public to advocate for the proposed EPA designation, including by filing formal comments with EPA. We're also working with the neighborhood through the Turner Station Conservation Teams to restore the shoreline at Fleming Park using dredged material from the Baltimore shipping channel to build a new marsh to support native vegetation, birds, and other wildlife.

The goal is to enable residents to access the shoreline for crabbing, fishing, and recreation as water quality in the area improves.

The EPA advocacy and shoreline project is CBF's latest work in the area east of Baltimore after years of litigation involving the steel mill site. In 2010, CBF and several local citizens worked with Blue Water Baltimore to sue the former owners of the site after nearby waterways were contaminated with heavy metals such as lead, mercury, and arsenic. While that litigation was pending, the steel mill filed for bankruptcy. Thankfully, CBF was able to secure funding in that proceeding to be set aside for investigation of the offshore water contamination. Additionally, agreements in 2014 between the state and federal government and the purchasers of the former steel mill require the new owners of the mill site, Tradepoint Atlantic, to remediate pollution on the property.

Today, the former mill site is now home to several companies such as Amazon, Home Depot, and Volkswagen, which operate distribution centers.

Nelson said that Tradepoint Atlantic has been a good partner to her neighborhood and the company has taken noticeable steps to improve the former mill site. But she said a lot more work must be done to fix the pollution offenses of the past.

"It's not going to happen overnight," Nelson said. "I'm not sure if I'll be around to see it happen. But I would like the community to be able to walk outside and breathe the fresh air, to be able to walk the shoreline if they so desire. To fish and crab if they so desire, and for that food to be edible and healthy. We are looking for a healthy and safe community. Health is the big issue."