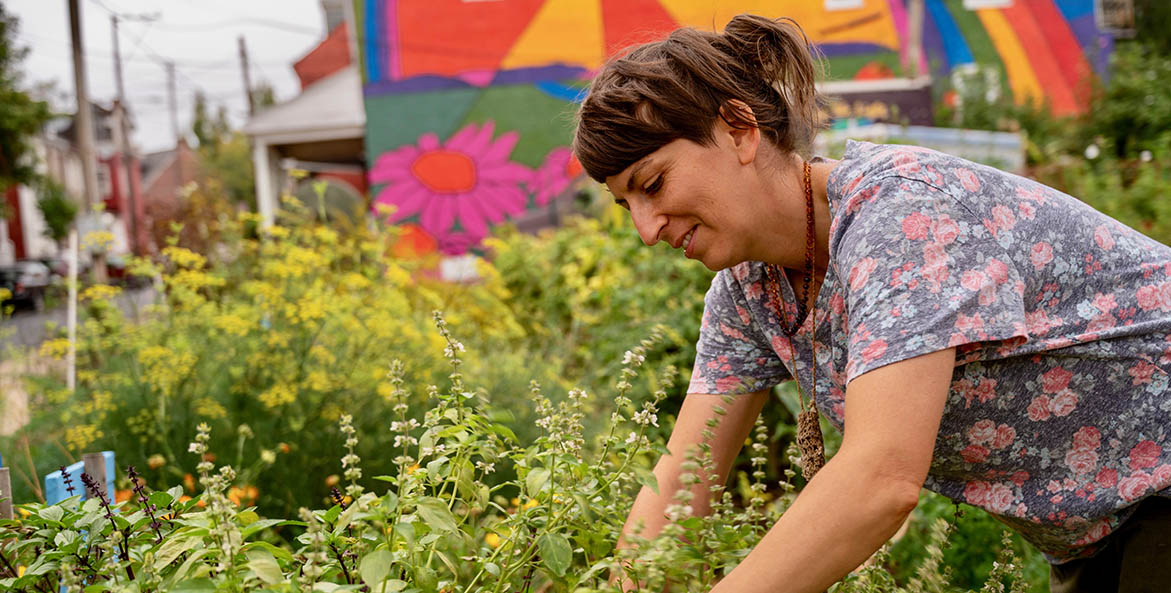 In her diverse, low-income, and predominantly refugee and immigrant Mussertown neighborhood, Shauna Yorty works with neighbors on Adopt-A-Block weekly trash cleanups, community art projects, and large-scale mural events not far from the community garden she leads.

For her efforts, Yorty received a 2021 Mira Lloyd Dock Partnership Diversity Award, given by the Keystone 10 Million Trees Partnership, coordinated by CBF. Kiasha Huling of Philadelphia also received the award.

Yorty is mostly self-taught and certified in permaculture. The community garden was started 10 years ago through Church World Service, which works with immigrants and refugees and asylum seekers. We sat down with Yorty to learn more about the garden and how it helps plant the "magical seed of community and connection" in Lancaster's Mussertown neighborhood.

How did you get started in gardening?

I threw a pumpkin away one year after we made a jack-o-lantern, and it actually started to grow in my backyard. I just made a garden around that. I put rotted vegetables in my garden to see what happened and just through experimentation sort of figured out how that worked and learned about soil building.

How did you come to live in Lancaster?

How would you describe Mussertown?

There are people outside all of the time, and they are constantly talking to each other from across the street. Half the time I don't know what anybody is saying, but they do. It's a lot of movement and energy and diversity. It's like being in a forest that is really healthy. It's a healthy ecosystem with all the biodiversity.

Is the garden a place for community?

Every year it changes because different people sign up to have their own plots, and you are coming to do your own gardening. But part of the agreement is that you will also help on community days to work and harvest. At those events we have activities for kids. You will see different people coming. Sometimes it's people who've come from farther away in the county.

People will often look at neighborhoods like this and because it is a low-income neighborhood [with] lots of renters, [they] have the assumption that people don't care. I think there is a [misunderstanding] in what is happening. Because when you talk to people, they do care. It's more, I think, a lack of resources more than a lack of action.

How do you see diversity growing?

Fostering conversations and connections is the basic seed for growing diversity. It is not just through what people look like and sound like, and where they are from, but also through what the environment is like and getting people to be involved.

Does greater understanding grow in the garden?

That's what's really cool about the garden project and the mural art project because some people don't want to strike up a conversation when you are walking down the street. There's a social and cultural weirdness about that. But when you can get people talking about plants and how you cook them, or you're planting seeds or pulling weeds together, or painting a wall together, that provides an opportunity for this magical seed of community and connection to get planted.

What about your work makes you feel warm inside?

It's easy to get bogged down about the fate of the world, climate change, and all the things and feel really small and helpless, worried and scared. Powerless. When I'm building connections with people and making that web and planting those seeds, that is where I feel like the magic happens. Nothing in nature makes big steps really. When I look at nature and am able to be a small part of it and feel ok about the movement that is coming out of the steps that I'm taking, that is what I feel warm and fuzzy about.